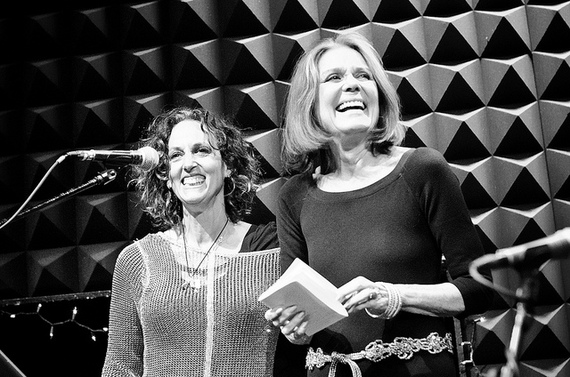 Today is Gloria Steinem's 80th birthday. The mother of the women's movement. The Mother of Feminism (Second Wave, that is). She, who paved the pathway for our physical, psychological, political, social, economic and vocal liberation in the 21st century. While Gloria opened the door for us, she acknowledges there's a lot left to do, and encourages us over the next half-century to "think big, unite and use our power." After all, she wrote in an essay in Ms. Magazine, "movements have to last at least a century to become part of global culture and everyday life." So how will we unite and use our power in the next 50 years of feminism?

Over the last three weeks, I have been thinking a lot about this. It's Women's History Month, and being a writer on women's rights, leadership and empowerment, one would assume I would have published several pieces by now. But there has been something sitting with me -- incubating in me -- and I how fitting that on the eve of Gloria's birthday, I found my fortitude to give voice to it.

Gloria served as an inspiration for me to use my voice.

Right now, we are in the fourth wave of feminism. But for many, this wave has yet to be clearly defined. Some say it is a movement of younger, technically-savvy women who are using social media to speak out and organize against sexual violence, sexual harassment, racist and sexist stereotyping, body-shaming, and workplace discrimination. Others say it is a new kind of political activism, based in feminine spirituality, where women are reclaiming the Goddess religion and their feminine spiritual past as a means to remember and reclaim their spiritual, political and economic power and authority. While others say the movement is based on reclaiming our feminine sexuality as sacred, as it was during the long reign of the Goddess.

Is it possible that it could it be all of these things?

Beginning in the late 1960s, during Gloria's second wave of feminism, there was talk of feminine spirituality as an important aspect of female liberation. Women gathered in circles to talk about the Goddess, talk about their experiences, and participate in rituals that honored the feminine. While these circles were strong, there seemed to be a separation between these women and the women who were more on the political front lines. The spiritual ones believed that the work could be accomplished from their inner work (aka, inner psychic reality creates outer material reality, or the personal is political), and the political ones believed that the spirituality circles were too inwardly directed and not effective on a material level.

The spiritual/political integration never really took off at that time, and as a result, neither did the integration of sacred sexuality into the feminist movement. Certainly the movement was about sexual liberation and equality, but the sacred part never made it into the primary socio-political conversation.

What needs to be shared here that many people forget (or maybe don't even realize) is that the spirituality of women, otherwise known as feminine spirituality, long pre-dates male religion. Father God is actually a spiritual newcomer, relative to Mother Goddess.

Archeologists and historians from around the world have discovered massive amounts of evidence showing us that during a period approximately of 25,000 years (30,000 B.C. to 4,500 B.C.), society and culture the world over was based on the Mother Principle, with Goddess as the primary religious leader and symbol.

As women today are the givers of life, the one who births, the Goddess was the spiritual representation of this magnificent gift. She was the Creator or the Creatrix, and was where all life started. Sound familiar? The difference between then and now, is that back then, she was revered for this magical ability to hold, carry and birth life. Her body was sacred -- seen as a beautiful vessel of Life Force.

Not only was woman spiritual leader during these many thousands of years, she was also economic, social and political leader. Children took the name of their mother's tribe or clan, and titles, possessions, and territorial rights passed through the female line. Woman not only provided human life and social structure, but also a controllable food supply. In addition to being able to provide food from her body for her young, she was the food gatherer, and according to respected archeologists like Marija Gimbutas, was responsible for the development of agriculture.

But somehow this goes unnoted in our current review of history.

Today, over 3,000 sites have been documented and tens of thousands of miniature sculptures and figurines of goddesses have been found. According to historian Bettany Hughes, if you look at all the human figurines that have been discovered dated from 40,000 B.C. to 1,000 B.C., 92 percent of those are of the female form.

But why is this history not taught to our children in school? Why do they not learn of this part of their lineage?

There are some who say that male religion and culture worked very hard to strategically obliterate the history of the Goddess and female-oriented religion and culture over the approximate 2,000-year takeover (4500 B.C. to 2000 B.C.). That in fact the goal of the writers of patriarchal religions and mythologies was to legitimize the new culture of patriarchal warriors and de-legitimize the Goddess. The Bible was written not long afterwards. In this document, the creation story was written where it took the power of birth away from woman and gave it to man. Adam made from God. Eve made from Adam's rib.

Then it was onto debasing woman's body and her sexuality. Eve was made the temptress and her naked body sinful. The story then became her action of picking the apple from the Tree of Life led to the downfall of all of humanity and the onset of evil in our world. Do you think that just might be a little heavy burden to carry?

Her sexuality, rather than being sacred as in Goddess times, was now seen as the cause of "evil temptation" in man. Is it any wonder why generations of women carry deep body memories of guilt and shame, and why violence against women is justified in so many cultures?

Women today, living in patriarchal society, are cut off from their true roots as Divine beings. As girls go to school in the United States and say, like I did, the Pledge of Allegiance, they are taught that they live in "One nation under God." As girls go to church or temple or mosque (and keep in mind that some mosques ban girls and women from attending), across the country, they are taught to worship a man and the religious doctrines and texts they follow, tell them that they are second-class beings and that violence against them is condoned. Yes, the murder of women is advocated in both the Bible and the Koran.

So, when there is an absence of the topic of feminine spirituality in any discussion on women's empowerment and women's leadership in the 21st century, I get a lump in my throat, a burning in my heart, and a strong desire to say: We have to wake up to Her!

It is not easy to stand up front and say this to large numbers of people. It's much easier to stay in small women's circles with women who "get it" and want to learn more about their Goddess lineage so that they can become fully empowered. It's easier to kind of hang back and wait for others to give you permission to take the podium, rather than taking the podium without hesitation, like Gloria, to speak the truth of what you know to be right and good.

If this next wave of feminism is to succeed in ensuring our rights and liberation as women and carrying on Gloria's legacy, we must revisit our past lineage that pre-dates patriarchal religion and culture. We cannot find our own power within a half truth. Girls and boys growing up need to learn in their World Civilization classes about the feminine-based culture that pre-dated the masculine-based culture. In their textbooks, they need to see the continuum and know their full human history (as far as we know it now).

On a global level, as the United Nations devises their post-2015 agenda and how they will address gender inequality, this critical issue of religion and spirituality cannot be ignored. Every global issue affecting women and girls -- including violence, lack of access to opportunities and resources, lack of quality education, lack of ownership and control of land, lack of participation in public and private sector decision-making, lack of health, sexual and reproductive rights, and lack of freedom of movement -- is all based on living in a patriarchal culture that denies the Divine nature and natural spiritual authority of women.

We already know that educating and empowering women and girls, has a hugely positive economic impact for communities and nations. But if this is still is still done in a worldwide culture that condones violence against women and classifies women as an offshoot of man, we are further oppressing women by making them machines of the patriarchy. I don't see liberation in this.

Knowing about our Goddess history legitimizes female power in society. It reminds us of the goodness of the female body and the sacredness of every female being.

When we learn about our Goddess lineage, we change the way we view and value ourselves, and are able to challenge the underlying assumptions, values and structures that dominate our society. Knowledge of this part of our human story calls into question ingrained views about power and authority and has the power to shatter long-standing cultural attitudes about women.

Imagine what we could accomplish in these next 50 years if we were to "think big, unite and use our power." Imagine women, men, girls and boys each seeing themselves as equally valuable human beings. Imagine how life would look and feel then.

Happy Birthday, Gloria. We honor you.

Tabby Biddle is a celebrated women's leadership coach and well-known voice speaking out for the human rights of women and girls. Learn more here.