When the late Graham Greene's The Comedians was published, the book's description read, "Set in Haiti, amid an atmosphere of brutal force and terror-ridden love, three desperate people work out their strange destinies". The bestseller became a major motion picture starring Richard Burton and Elizabeth Taylor. It was the 1960s and there was a cruel dictator in power.

Greene who had a penchant for spy thrillers and post-colonial maneuverings was hailed in The Nation. A reviewer proclaimed his latest adventure, "the most interesting novel of his career... closer to a tragedy than anything he has written".

Relevance of The Comedians is apparent in Haiti's recently cancelled election runoff that was set for this past Sunday. Indeed, until then, the outgoing president Michel Martelly, a chap with dictatorial tendencies who leads the "Bald Headed Haitian Party" -- insisted on proceeding with business as usual. His would-be successor, Jovonel Moïse the so-called leading candidate, is eager to turn Haiti into a "banana republic", a discursive play on his plantain plantation commerce. The opposition, Jude Celestin, boycotted the event and penned an op-ed disavowing the impending masquerade as a total farce. The masses who continue to suffer were being forced once again to absorb this electoral crisis and participate in a "selection", as they say in the local parlance. It is hard to discern which is more comic and/or tragic in these instances. 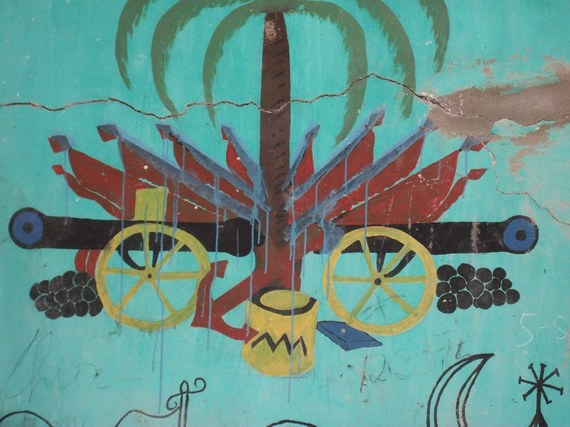 "Surely you jest", I say to myself in a mocking tone as elders decry, "the country has lost its dignity", knowing full well that my late grandmother would use expletives.

This Christmas, when I visited family, the ride to the immigrant enclave they call home was, as always, an educational one. My Kreyòl vocabulary got a free upgrade as soon as I revealed my identity to taxi drivers, who are often also Haitian. Curious about new views on this moment, I interrogated him (this is an occupational hazard, in part, as I am a cultural anthropologist).

Upon my arrival, I sincerely apologized for making him talk so much. "Au contraire," he insisted, "It would been purely criminal and inhumane if you had not asked me about the state of things in our country."

Probably a septuagenarian, he is a member of what I call the "Haiti Cherie" generation -- folks who migrated probably in their thirties who knew and can still recite the entire folk song with this title about love for their pays natal. While they have worked and made a life in this country or elsewhere in the Haitian diaspora, they maintain affective attachments to their homeland because as stated in the lyrics, "I had to leave you to understand your true value". As the country's social welfare net, they routinely support relatives with remittances buffering the high unemployment rate, and tend to the sick in the absence of healthcare provisions. Many among them also make annual or more frequent returns during holidays to see family and enjoy post-retirement leisure because as the old saying goes, lakay se lakay. Home is home. In times of increasing political instability, many unwillingly cancel such trips.

The word "laloz" lingers from my conversation with the driver who lamented our beloved Haiti has been turned into a joke by current leadership.

These neo-comedians are a remix that Haitians at home and abroad have previously lived through. This time, the "terror-ridden love" triangle revolves around a people abandonned by their state who have always been casualties of geopolitical games, a divided diasporic population with limited power, and an international community concerned with other matters. There is a (U.S.) presidency at stake. Indeed, Martelly's own rise to power simply cannot be detangled from post-quake dealings involving the Clinton Foundation and the State Department along with a slew of humanitarian aftershocks. Meanwhile a new pattern of brutality continues to go unnoticed by our friends. On the ground, Haitians refuse to turn back. There have been articles and protests. So the silence is not ours.

As our hearts break and spirits crush, nou rete, nap gade. We sit and watch Haiti Cherie fall apart, once again. I asked the driver what he wanted for the future. He stuped with disgust, frustration while confronting the impossibility of his desire:

"I want my country back!"