If you are at all interested in astronomy, chances are you've already heard that the Hubble Space Telescope is celebrating its 25th anniversary this week. What some people may not know is that Hubble is one of four siblings, so to speak. Back in the 1980s, NASA commissioned the "Great Observatories," each designed and built to study different wavelengths of light. 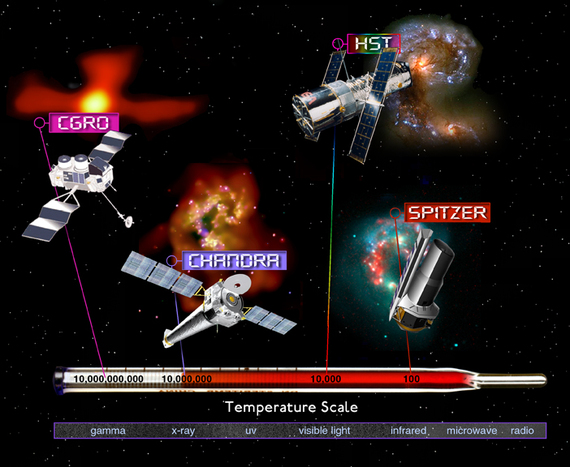 The four Great Observatories, in order of their launches that took place between 1990 and 2003, are Hubble, the Compton Gamma Ray Observatory, the Chandra X-ray Observatory, and the Spitzer Space Telescope. 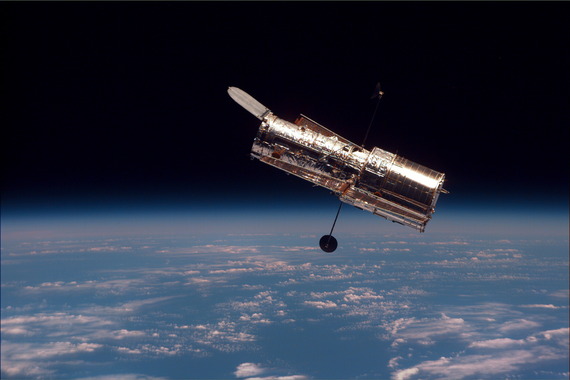 A photo of the Hubble Space Telescope, doing its job in space. Credit: NASA

NASA's Hubble Space Telescope was launched on April 24, 1990. Hubble has four main scientific instruments that allow it to observe not only in visible light but also near ultraviolet and near infrared. Hubble helped determine how old our Universe is, what quasars are, and also helped discover "dark energy." 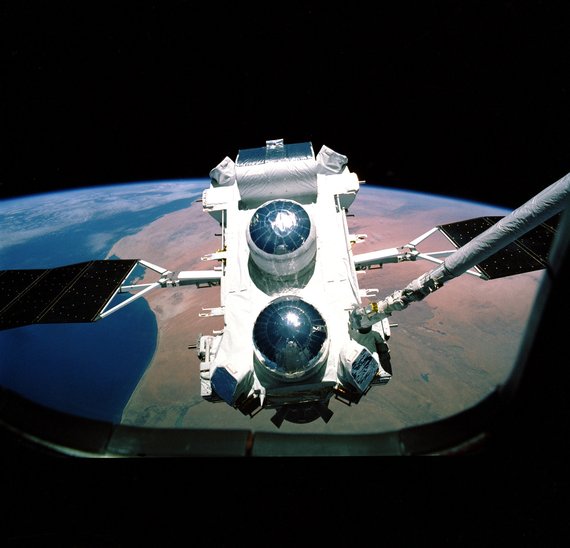 The space shuttle crew took a photo of the Compton Gamma Ray Observatory as the satellite was deployed, with Earth visible beneath it. Credit: NASA/MSFC

In 1991, NASA launched a satellite into space carrying the Compton Gamma Ray Observatory (CGRO). The goal of Compton was to study gamma rays from objects far out into space. Gamma ray telescopes can study incredibly exotic objects such as blazars, magnetars, cosmic rays, and dark matter. Compton operated in space until when NASA intentionally sent it into the Earth's ocean in 2000. 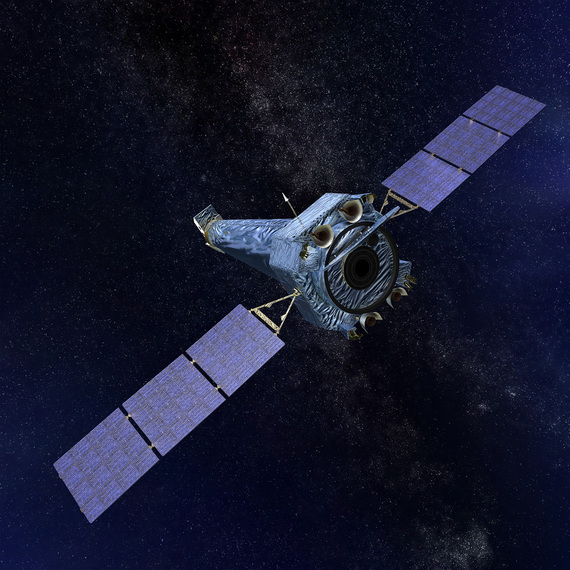 An artist's illustration of the Chandra X-ray Observatory in space. Credit: NGST

NASA's Chandra X-ray Observatory is a telescope specially designed to detect X-ray emission from very hot regions of the Universe such as exploded stars, clusters of galaxies, and matter around black holes. Because X-rays are absorbed by Earth's atmosphere, Chandra must orbit above it, up to an altitude of 139,000 km (86,500 mi) in space. Chandra was launched aboard the Space Shuttle Columbia in 1999 and continues to be in excellent health and deliver incredible science over a decade and half later. 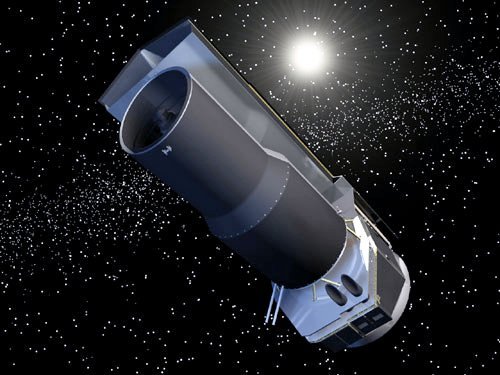 An artist's illustration of the Spitzer Space Telescope in orbit. Credit: NASA

The last of the Great Observatories, the Spitzer Space Telescope, was launched into orbit in 2003. Spitzer is designed to detect infrared light, which is primarily radiation from heat. This gives Spitzer the ability to study objects like brown dwarfs (failed stars), extrasolar planets, giant clouds of gas and dust, and organic molecules that may hold the key to life in the Universe.

Over the years, astronomers have used often used data from these telescopes together. Not only does this reap incredible scientific rewards, the combined datasets from the different observatories often make spectacular images that help all viewers get a more complete picture of our fascinating Universe. (Astronomers call images with different types of light "multiwavelength" images because each type of light encompasses different sets of wavelengths.) We think this may be a perfect example of Aristotle's old adage that the whole is truly greater than the sum of its parts.

With that, we've selected some of our favorite multiwavelength images with Hubble, Chandra and Spitzer data (and listed the colors that each image is shown in). Each type of light brings a new piece of the puzzle in the quest to understand the cosmos we live in. We hope there will be many more years to see our Universe in a whole new light. 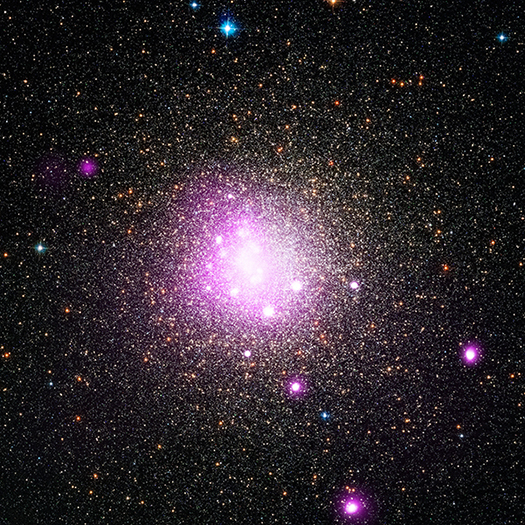 NGC 6388 is a globular cluster about 35,000 light years from Earth. In this image, the Hubble data is colored in red, green and blue, with X-ray data from Chandra in pink. 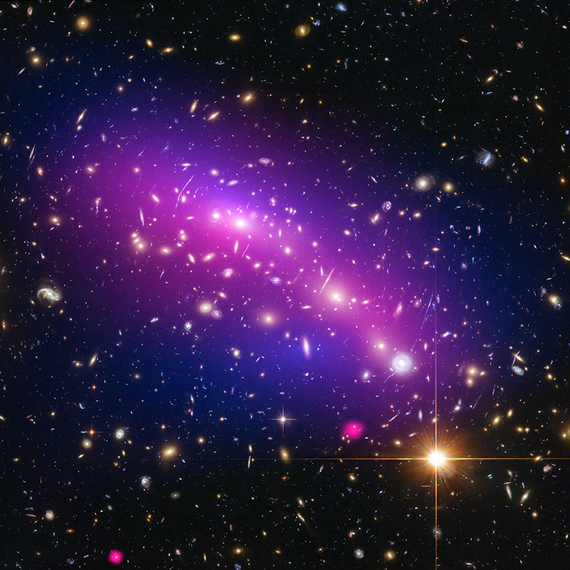 MACS J0416.1-2403 is a galaxy cluster about 4.29 billion light years from Earth. In the image, Hubble data is colored red, green and blue, with a lensing map in blue, and the Chandra X-ray data is colored pink. 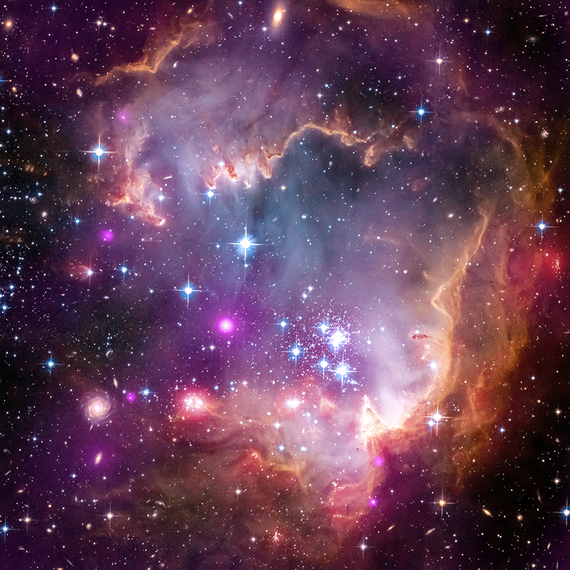 NGC 602 is a cluster of young stars in the Small Magellanic Cloud (SMC), one of the closest galaxies to our Milky Way. The Hubble image is shown in red, green and blue with Chandra information colored purple and Spitzer colored red. 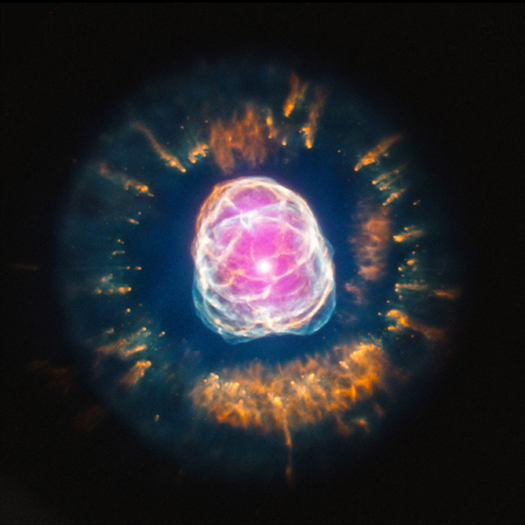 NGC 2392 is a star like our Sun that is in the end phase of its life, situated about 4,200 light years from Earth. The Hubble optical data is shown in red, green and blue with the Chandra X-ray data in pink. 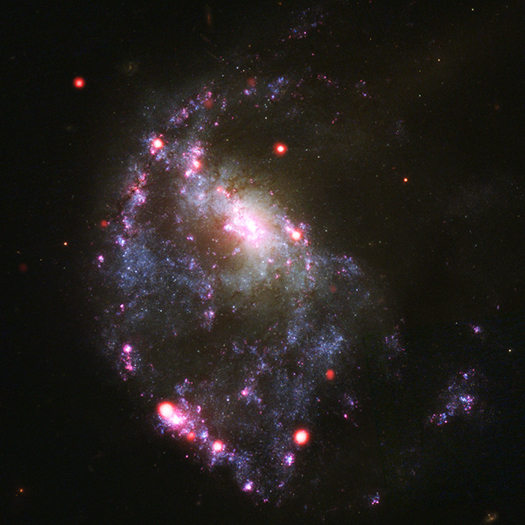 NGC 922 is a ring galaxy about 157 million light years from Earth. In this image, Hubble information is colored red, green and blue with Chandra X-ray information in red. 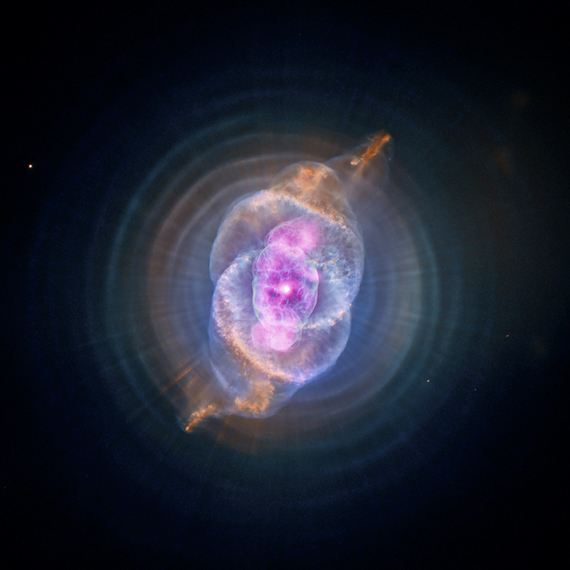 NGC 6543 (also known as the Cat's Eye) is a planetary nebulas located less than 5.000 light years from Earth. The Hubble optical image is shown in red, green and blue, with the Chandra X-ray image overlaid in purple. 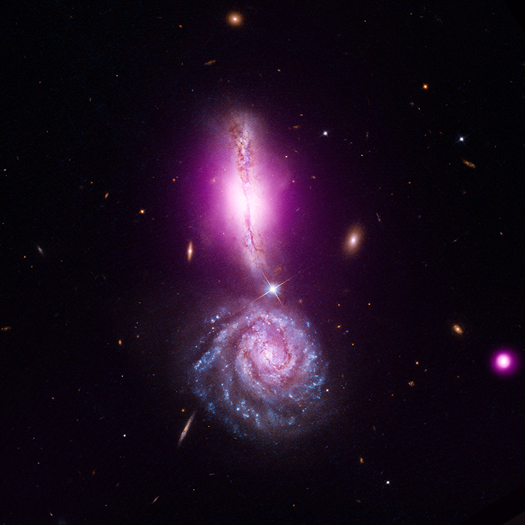 VV 340 is a pair of galaxies located about 450 million light years from Earth. The Hubble image has been colored red, green and blue, and the Chandra X-ray image is depicted in purple. 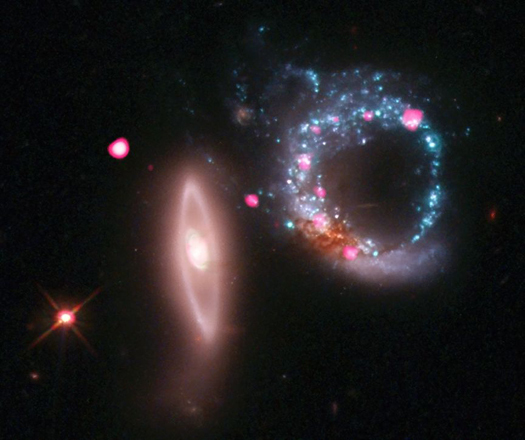 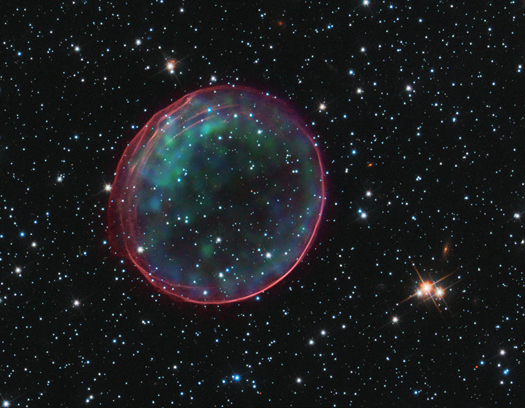 SNR 0509-67.5 is a supernova remnant in the Large Magellanic Cloud, which lies about 160,000 light years from Earth. The Hubble image is depicted in orange, red and violet with the Chandra X-ray image overlaid in green and blue. 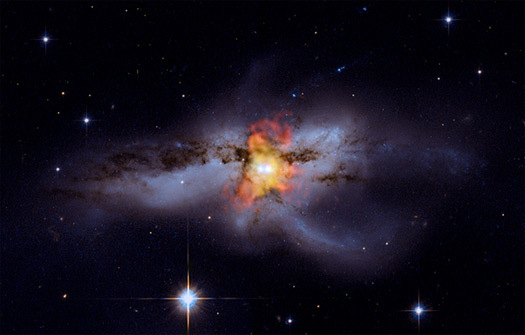 NGC 6240 is a galaxy about 330 million light years from Earth. Hubble data is shown in red, green and blue and is overlaid with Chandra data depicted in orange and cyan. 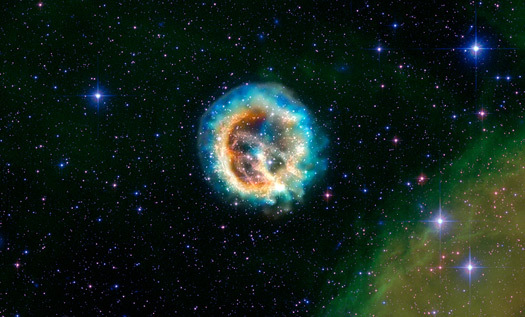 E0102, officially known as 1E0102.2-7219, is a supernova remnant in the Small Magellanic Cloud. Hubble's image in red, green and blue has been overlaid with Chandra's image in blue, cyan and orange. 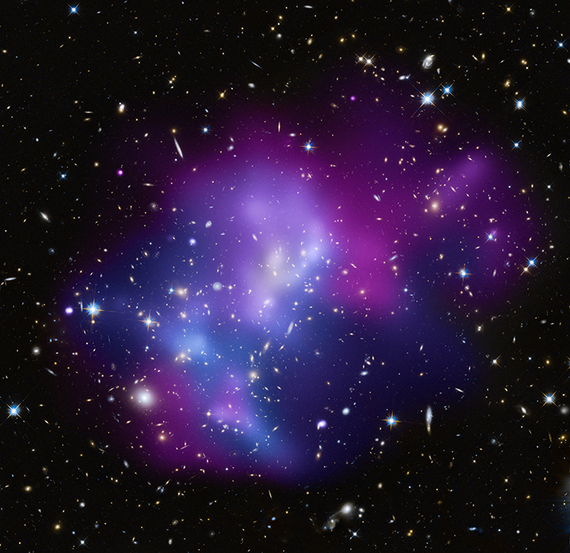 MACSJ0717.5+3745 is one of the most complex galaxy clusters known, located about 5.4 billion light years from Earth. The Hubble data is colored in cyan and yellow, with the Chandra data in blue and violet. 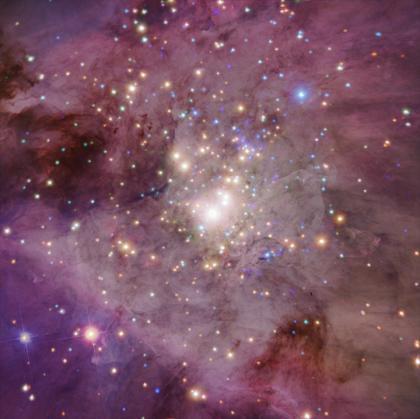 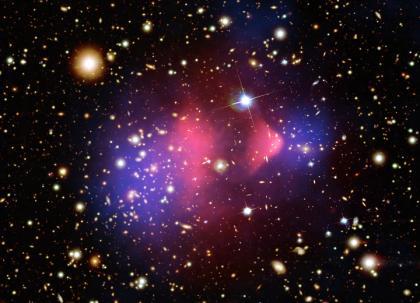 1E 0657-56 (also known as the Bullet Cluster) is the site of a collision between two large galaxy clusters about 3.4 billion light years from Earth. Hubble data is shown in white and orange with the lensing map in blue, and Chandra data is shown in pink. 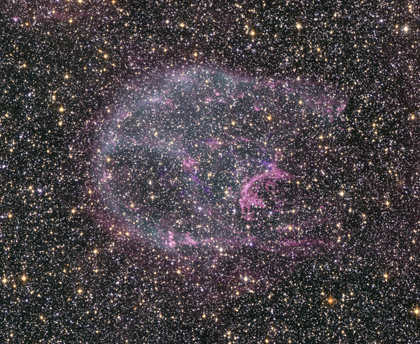 N132D is a supernova remnant in the Large Magellanic Cloud, about 160,000 light years from Earth. Hubble's image is colored in pink and purple with Chandra's image in blue.

This post was co-authored by Kimberly Arcand and Megan Watzke.