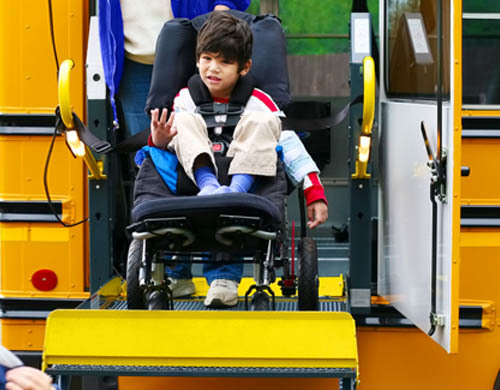 It's hard for me to believe, but this year marks the 40th anniversary of Pub. L. 94-142, the forerunner of today's Individuals with Disabilities Education Act (IDEA). I was a special education teacher before IDEA, and I saw many of the positive changes that took place because of the law. I taught developmentally delayed children in Oregon, which was ahead of the curve in many ways and was starting to implement mainstreaming before 1975. I worked in a self-contained school, and the classes were slowly being moved out to other schools one by one. My kids were the lowest-performing in the self-contained school (a privilege for the new teacher), so we were going to be the last class to move. My principal took me to see the elementary school to which we were to be moved. It was totally inappropriate. The only source of water or toilet facilities was the boy's bathroom down the hall, which had one of those old-fashioned fountains that you activated by stepping on a bar and getting a fine spray of water. I had diapers to change. I refused to go.

My principal was understanding. She and the whole rest of the staff left my building. They put the school phone in my classroom. It was actually kind of fun. I was 22 years old and was in charge of my own school. The irony is that then and now I've been a big advocate of mainstreaming, or integration, but I started my career fighting it.

In that long-ago school, I had many extraordinary experiences, but one in particular sticks with me. It makes me so angry and frustrated that to this day I cannot speak about it without choking up.

Because I was the only male teacher, I was assigned large, obstreperous kids. One of them was a 15-year old I'll call Sam. Sam had spent his entire school career in my school. He was extremely difficult. If you asked him to do anything at all, he would fly into a rage, scratch, kick, and bite. Under the best of circumstances he would spit in all directions.

Because I was young and idealistic, I decided to go visit all of my kids at home, something no other teacher had ever done, to my knowledge. When I told my colleagues I was going to visit Sam and his mom, they took me aside and whispered to me, "Watch out. His mom is crazy. She thinks Sam can talk."

I went to Sam's house which was on a small farm. His mother was very nice, and she did not seem crazy at all. We chatted for a while, and then I casually mentioned that the staff at my school said that she thought Sam could talk. Could he?

Sam's mom sighed. "Yes," she said, "but I've long ago given up getting anyone at the school to listen."

I asked what kinds of things he could say, and then asked what he liked. She told me that he loved music and asked for records all the time.

The very next day, I was ready. I had my aide watch the other kids, and I put on a record for Sam. Then I picked up the arm on the turntable. "Say 'record,'" I said to Sam, "and I'll put the music back on."

Sam went completely wild. He tore his clothing. He tried to scratch and bite me. I got him in a gentle but secure hold on the floor where he could not hurt himself or me, and just held him struggling and making inarticulate groans and shrieks. We remained in that position for perhaps a half hour. Finally, Sam calmed down.

From then on, I worked with Sam every day. I got audio tapes with current popular songs on them and used a few seconds of music to reinforce good behaviors. He learned, or really relearned, language skills at a great rate. Later, I realized that he needed to learn occupational skills so he could stay at home and work in a sheltered workshop that had moved into my school after all the kids left. I taught him to do what the sheltered workshop did, fold and stuff letters and other similar tasks. Sam became calm, well behaved, even loving. He stopped spitting.

So what is infuriating? Sam could always talk. I don't want to blame my fellow teachers, who were some of the finest people I've ever worked with. But the fact is that Sam did not talk because no one was willing to do what was necessary to reach out to him, to ask him for his best.

The story of Sam haunts me as I advocate for evidence in education. Well-meaning people who love children, who have devoted their lives to children, all too often fail to ask for the best from children because they choose to ignore the evidence. It is a full-blown crisis when a child does not learn to read. There are numerous programs with strong evidence of effectiveness in preventing or remediating reading failure. When educational leaders choose not to seek out these programs or practices, they are failing to ask the best from children, or to give children the best chance to succeed. Why is this OK? When our leaders fail to fund research, innovation, and diffusion of proven programs, they are failing hundreds or thousands of children who could have succeeded with a program not yet invented because no one insisted that it be supported, evaluated, and disseminated if it worked. Why is this OK?

On this 40th anniversary of Pub. L. 94-142, I hope we can take a moment to reflect on what that extraordinary act was supposed to achieve. It was not just intended to guarantee services to children with disabilities, not just to serve them in the least restrictive environment, not just to see that they had IEPs. The idea was to help children achieve the maximum degree of success they could achieve. The idea was to ask for the best from every child, and to give whatever it takes to see that they do succeed. With the advent of evidence-based reform, and a rising number of proven solutions available for use with all sorts of children, it should become increasingly possible to demand more of ourselves as educators. If we know how to do better for children at risk, there is no excuse for not doing it.