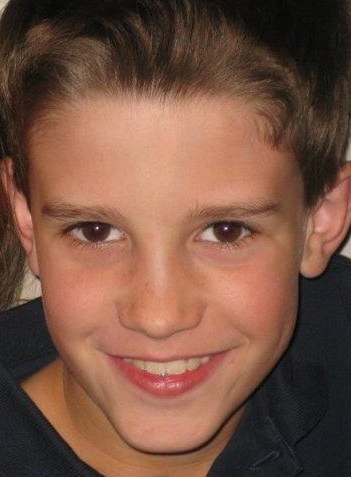 Today the boy in this photo, Jack, would've turned 16. Had he not been swept up by a flooding creek in a friend's backyard in September of 2011, Jack would be with his mom and dad, sister and cousins and friends tonight, celebrating his sweet 16. They would be out at his favorite Mexican restaurant, where Jack would've ordered quesadillas and chips with guacamole. Having recently earned his driver's license, Jack would pester his father after dinner for the keys: "Can I please drive us home?" His mother wonders if he would've been a good driver --he'd always erred on the side of safety -- had never been a daring kid. Would that have changed by age 16? What other ways would he have changed? What new interests would've replaced the Lego obsession? Would he be as tall as his father? Would he have a crush? "Would he still let me grab him and pull him close for a hug?" When I asked Anna Whiston-Donaldson what Jack's birthday would look like, she said:

Today, my daughter will go to school, my husband will go to work, and I'll likely stay home, pretending to write but not writing. Today is a significant day for us, but it won't look much different than these last 3 ½ years have -- a mom, a dad and a sister quietly figuring out a way to keep on going.

I consumed Whiston-Donaldson's memoir -- equally exquisite and heart-wrenching -- over a two-day period, damn near canceling plans so that my reading of it could continue without interruption. I found the author first through the writing on her blog -- seemingly light-hearted until tragedy struck. From her post, "The Bridge: One Terrible Night":

This was the broken woman who had told her kids to go ahead and play in the rain. Who had warned her kids about lightning and salmonella and sexual abuse and pornography and STDs and bullying and collapsing tunnels of sand and snow, but who had never given the creek one single thought.

The horror, the regret and the disbelief are all palpable, any parent's worst nightmare, and Whiston-Donaldson writes about it all with remarkable candor. I never knew of Anna or the adorable Jack, until after the flood had taken him. I had never read her blog when it was just light-hearted. I cannot even fathom what it must be like to be both women -- the Anna before all this, and the Anna after. How does one ever make sense of it? Rare Bird is an attempt to do that. It contains the anguish you would expect to find in a book about a boy falling into a tiny-creek-turned-raging-river, a book about his family having to go on without him. But what's unexpected is how much Rare Bird also dishes up hope, faith, gratitude, miracles and inspiration.

In a passage toward the end of the memoir, the narrator, Anna, is mowing the grass her son Jack used to mow. She speaks to her husband.

'Do you remember it being this hard?' I ask Tim.

'No, the roots and the hills! Our yard is so steep. How did he do it?' Tim wonders, shaking his head.

We are silent. We both feel remorse.

I push the mower up over high, high roots, cursing as I use all my strength. I roll past the garden bed, along a steep slope, and feel the tension as the mower tilts and threatens to tip me over, down the hill...

...And I realize as I mow and talk to Jack, that when I say 'I'm sorry, buddy' and 'I didn't know,' I'm probably not talking just about mowing anymore."

Their treacherous lawn, its roots and steep slope, the heavy mower that could take one down, mow one over -- all of this a lovely metaphor for the harsh and ragged topography of grief. 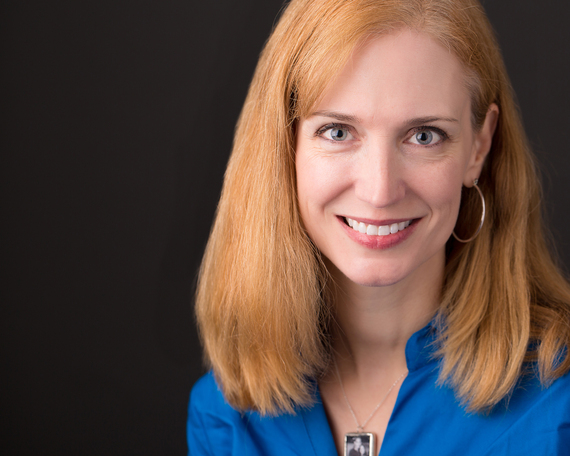 Anna Whiston-Donaldson was kind enough to answer some questions, on the eve of Jack's 16th birthday.

Bishop: Last fall marked three years since the drowning death of your son Jack. Can you speak briefly about the trajectory of grief over time? How was the third year of this loss different from the second? I imagine the first year to be an utter blur, just something to endure, day by day. What can you say about year three that might give hope to someone whose loss is more recent, more fresh, more gaping? And what do you continue to learn about love and loss and grief as the pages of the calendar turn?

Whiston-Donaldson: Yes, year one was a blur of shock and acute grief. Year two, especially the beginning, proved extremely difficult because the shock wore off and reality began to sink in. It was especially painful to have a new year in which our son never lived. Year three has given way to much more joy despite the presence of grief and longing. In year three, I find myself genuinely looking forward to things again with hope, not just forcing myself to endure them.

Bishop: I'm sure other interviewers have asked you about the effect writing has had on your experience of this tragic loss, the one psychologists say is more devastating than any other -- loss of a child. When, along the timeline of this tragedy, did you begin to write about it and when did you know it would be a book-length memoir, and how has the writing of this story shaped both your grief and your ongoing recovery? Was there anything you noticed particularly when the book was released? When you began to have readers and hear from them? I'm interested in the interplay between the loss and the writing about it.

Whiston-Donaldson: I had been blogging for over five years when we lost Jack, and I began to write again almost immediately in order to keep my readers informed as well as to process my grief. This early writing led to my book, Rare Bird, which I began shortly after the one year "crapiversary" of losing Jack. My publisher and I saw value in capturing the raw, early days of grief, even though my situation would not be "resolved" by the time the book came out, if ever. Early grief is messy, and my book speaks to that. Personally, it was very healthy for me to have blog readers to interact with, as well as to have a task to focus on -- writing a memoir -- in the throes of grief. I appreciated having a reason to keep writing, and to keep showing up to life. When the book was released, I was grateful that my story would reach a wider audience and hopefully help even more people feel less alone in whatever struggles they face. I knew that my writing was helping me, but it has been gratifying to find out, through readers' responses, it also helps others. I must admit, however, that when I saw the beautiful box of books on my doorstep, my first thought was: "I don't want a book; I want my son."

Bishop: When you ask yourself how this happened and why this happened, what are the not-so-subtle differences in those questions, how and why?

Whiston-Donaldson: Well, when I think of the how this happened, I have come to realize that absolutely everything had to go wrong in those moments -- a lack of electricity that drove the kids outside to play in the warm rain, bad judgment on all of our parts, the wrong backyard at the wrong time, a flash flood that no one knew was coming and more. When I think of the why, I vacillate between sensing that it is part of a bigger plan for Jack's life and our family's life, to just a cruel series of events culminating in a nightmare.

Bishop: More than three years after the flood that took Jack away, what still wakes you up at night? What, if anything, remains unresolved?

Whiston-Donaldson: Three years removed from the accident, I am gratefully free of the rumination that threatened to take me down in the beginning. What is left is an intense longing to go back in time to when our family felt complete. 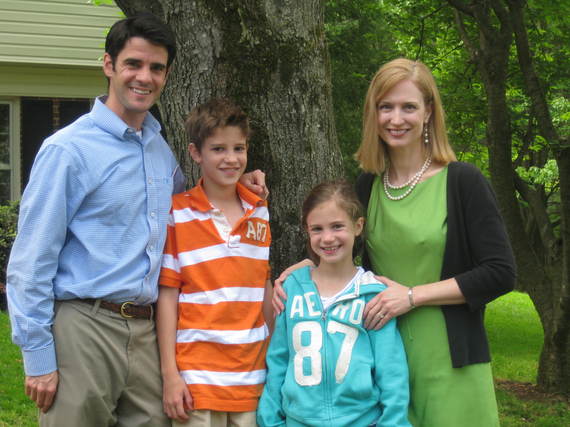 Bishop: In what directions has this tragedy led you that you might never have anticipated? Obviously, it led you to the writing of Rare Bird, but what other unanticipated outcomes have come from this?

Whiston-Donaldson: One outcome is that I'm more tuned in to the gray areas of life. I don't have to know exactly how God operates. I don't have to hold everyone to the same standards to which I hold myself. I am learning to let go of the why's. There is a sense of variety and variance that I lacked before. Each of us in this family loves structure and order, yet from the most obvious out of order death -- burying one's child -- to the daily flexibility that grieving together has required of us, our new reality is that all the order and structure in the world does not immunize us from loss or point a way forward out of it.

Bishop: I like that -- more tuned in to the gray areas of life -- double meaning now for your blog title, an inch of gray.

Bishop: If you could channel your daughter Margaret, what do you think this 13-year-old would say about the effect of the loss of her brother on her parents, her family? 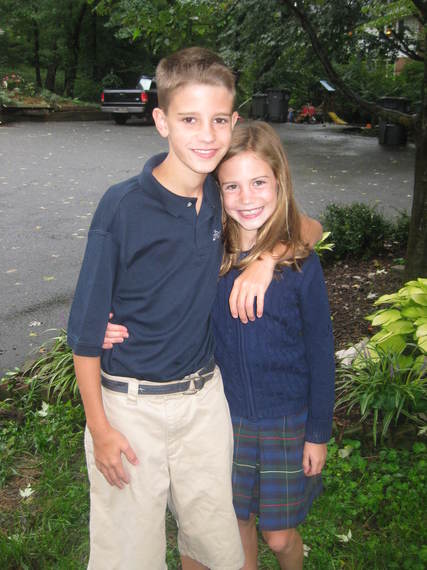 Whiston-Donaldson: I think she would definitely see the past as the good old days, even as she has hope for the future. She would see a mom and dad who are present for her every single day, but there is the undercurrent, always, that this is not how any of us wanted it to be, not for Jack, not for us, and especially not for her. Being 13 is not a joy for pretty much anyone, but to be thrust into traumatic loss, to grow up without your brother and best friend, and to have all of your parents' fervor and love and concern directed solely at you, rather than spread around... my goodness, that's a lot to deal with. We are so proud of her.

Bishop: I notice you wear a tiny version of that same photograph of Margaret and Jack, around your neck. Is that photo particularly significant?

Whiston-Donaldson: It is. It was taken the day before the accident, the first day of school. It's one of the last photographs we have of Jack.

Bishop: Given the gorgeous grace and candor with which you approach your blog and your book, readers wonder if there is anything you can't discuss. What place/memory/emotion/question out of all this, if I may ask, are you unwilling to visit?

Whiston-Donaldson: I think I probably have some more wrestling with God to do at some point. I'm not feeling that now, but I'm open and ready for it down the road. I also have bitterness that creeps up when I think of the future I wanted for Jack. I try to be honest about our experience and about grief because I do believe that when we know better, we do better. I hope that my transparency will somehow help someone else. 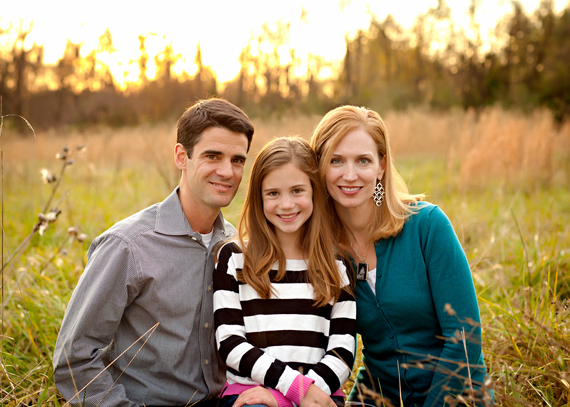 Thank you, Anna, for sharing your experience with the world through Rare Bird. I wish you and your family -- in its new configuration, however wobbly -- grace and wisdom and healing. 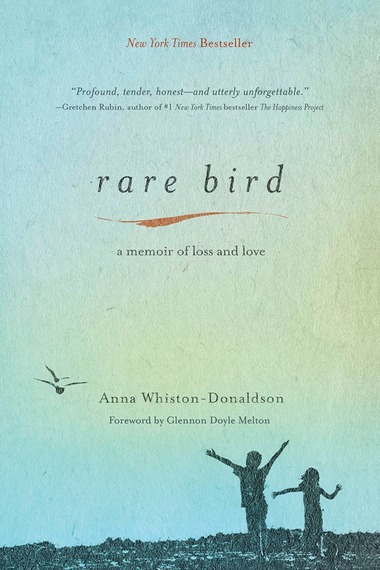