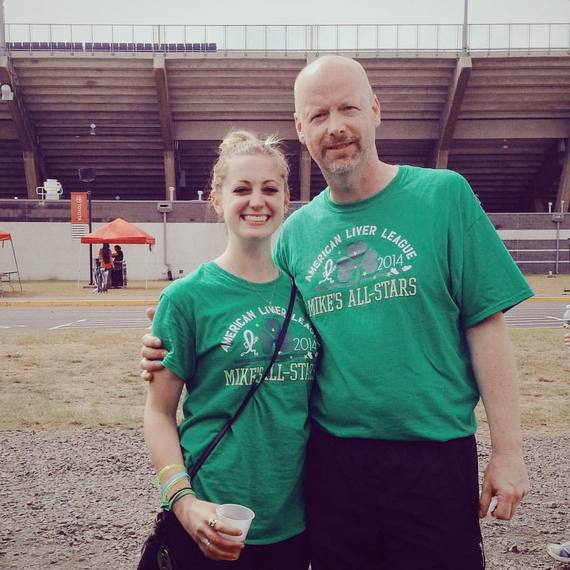 This will be my first Father's Day without my father. A fatherless day, really. I got my first "it's never too soon to shop for Dad!" email promptly following Mother's Day, which I'd like to address -- do you know how much I procrastinate? It's May. I've been trying to prepare myself for the email invitations to Father's Day brunches, and "get your Dad something nice for Father's Day!" commercials, and I've never even taken my Dad out to a Father's Day brunch. Suddenly, though, I wish I could. Or at least meander over the idea in the realm of possibility.

I was blindsided by my first real acknowledgment of my Dad's passing. For the past six months, I've been cheering on my efforts of maintaining my composure. I've been reminding myself that I knew my dad's death was coming, as though it would stand in place of my right to grieve. I didn't realize how quickly these repressions would resurface until I was confronted with subtle suggestions, like having a conversation with my girlfriend about growing up while waiting for milkshakes, or hearing someone say, "Hey, Dad!" It makes me humbled but hungry to remember that feeling.

My Dad's stone was engraved a few weeks ago, and though it wasn't a surprise, I stood there emotionally derailed looking at my father's name above two dates and three nouns that are supposed to be a significant representation of who he was. I don't like to say we've been cheated because it sounds selfish but we've been absolutely slapped in the face if we've lost a parent.

Both May and June we're forced to turn our cheeks and grapple with the slightest bit of envy towards everyone occupying the greeting card aisle in search of the perfect message to sign their name below. I realize Father's Day might be just like any other Sunday, but unlike a normal day, it's bringing up the word Dad far too often -- reminding me how it felt to be a daughter looking up at her Dad and seeing his face.

I would like to ask my Dad so many questions: am I making you proud? Why is my car making so many weird noises? What was your exact ratio of sugar to water for the hummingbird food? Do you feel as cheated as we do?

It sucks, I mean, there's no other way to put it unless I keep lying to myself. In the quiet moments I still beg for answers that I'll never receive. I look out into my backyard and imagine my Dad standing there, planting flowers or mowing the lawn or filling his beloved bird feeders. Such Dad stuff, right? Attempting to reject this form of musing is futile.

The anticipation of Father's Day has become a dreadful kaleidoscope of carnival mirrors, disfiguring a warm June that once felt welcoming, instead of an excuse for a picnic or a card to sign.

Alicia Napierkowski is a freelance writer and designer based in CT. More of her work can be found at: sunlight & insight.

Alicia Napierkowski is a freelance writer and Oxford comma enthusiast. Get in touch and check out her latest publications including HelloGiggles: www.alicianapierkowski.com alicia.napierkowski@gmail.com