The holidays are usually a joyous time to spend with family and friends, sipping eggnog, trading presents, singing carols. But this year given the gloomy economic circumstances and ongoing wars in Iraq and Afghanistan, I'm reminded of a line from the holiday classic Christmas Vacation: "It's Christmas and we're all in misery."

For some military families, the stress of war has proven to be too much:

While 1st Lt. Mike Robison was serving in Iraq in 2003-04, his wife, Candance, depicted him as a "good, brave man"... But the marriage fell apart after Robison's return home to Texas. Candance said they argued over her role managing the household and how he treated her 10-year old daughter from a previous relationship.

"It absolutely changed him," Candance said of his deployment. "I still struggle every day--that year has affected every single aspect of my life."

Heartbreaking stories like the Robisons' are increasingly common. This week, new numbers from the Department of Defense confirm that the divorce rate among active-duty troops is rising. 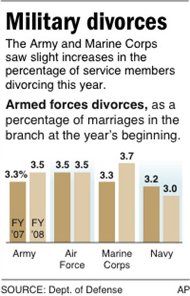 But the new divorce figures don't tell the whole story. They fail to account for troops who divorce after leaving the military, the divorce rates of National Guardsmen and Reservists, or the number of marriages intact but in trouble. And no one is keeping track of the untold strain that frequent deployments are having on other relationships, including girlfriends, boyfriends, parents, siblings and children.

This shouldn't be a surprise to anybody. After seven years of war, America's military families are bearing an unprecedented burden. More than 600,000 troops have served more than one tour in Iraq or Afghanistan. Our troops are missing Christmases, birthdays, and wedding anniversaries -- often back to back. Picture spending this holiday season with a loved one deployed, and then imagine multiplying it by two, three, and sometimes four years in a row. Pretty crushing, right? The marathon deployment cycle is also contributing to higher rates of mental health injuries among troops, adding greater stress to already strained families. Nearly 20 percent of Iraq and Afghanistan veterans report symptoms of post traumatic stress disorder or major depression. All of this piles up and can create some rough times at kitchen tables in places like Fort Hood and Camp Pendleton.

And the current economy makes it worse. The economic situation is bleak for all American families, but for military families, it's even tougher. Foreclosure rates in military towns are increasing at four times the national average. The unemployment rate of Iraq and Afghanistan veterans who have left the active-duty military was over 8 percent in 2007, almost double the national average at that time. Confronted with the lack of civilian job prospects, more servicemembers are choosing to re-enlist, despite the threat of another tour overseas. Military recruiters might be the only people in America rooting against an economic recovery right now.

Until we reduce multiple deployments and provide adequate resources to troops transitioning home, military families will continue to struggle. Ensuring military families are properly taken care of will be one of the most pressing challenges facing the new administration. The president-elect and the First Lady must make military families a top priority. Michelle Obama has frequently promised to do just that.

President-elect Obama can begin to tackle this issue by naming his choice for VA Secretary soon -- a decision our military families and veterans have all been waiting for. There's lots of speculation out there about who it will be. But one thing's for sure: change is on everyone's list for Santa. A truly transformative leader heading the VA, with the full support of the president, would be a great thing for our military families to have under their Christmas tree this year.