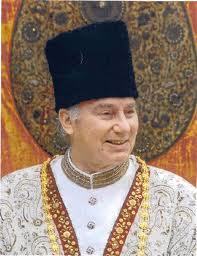 As a Muslim Pluralist myself, I have come to admire HH Aga Khan for reviving a few of the core values of Islam; Pluralism, and the second most important value called -- Huqooqul Ibad -- the obligatory duties to fellow beings.

Prophet Muhammad (pbuh) and Hazrat Ali (ra) had continuously advocated living in moderation; it's a mid path between the worldly and spiritual needs. The Aga Khan has fine tuned that balance between material and spiritual life.

He performs his religious duties by interpreting Qur'an to his 15 million plus followers spread out across the world, fulfilling his role as the spiritual leader of the Ismaili Muslim community.

In his speech to the Parliament of Canada on February 27, 2014, he explains the Shia-Sunni and Ismaili tradition, "The Ismaili Imamat is a supra-national entity, representing the succession of Imams since the time of the Prophet. But let me clarify something more about the history of that role, in both the Sunni and Shia interpretations of the Muslim faith. The Sunni position is that the Prophet nominated no successor, and that spiritual-moral authority belongs to those who are learned in matters of religious law. As a result, there are many Sunni imams in a given time and place. But others believed that the Prophet had designated his cousin and son-in-law, Ali, as his successor. From that early division, a host of further distinctions grew up -- but the question of rightful leadership remains central. In time, the Shia were also sub-divided over this question, so that today the Ismailis are the only Shia community who, throughout history, have been led by a living, hereditary Imam in direct descent from the Prophet. "

On the other hand he is guiding the community to prosperity and living a responsible life in the societies they live.

He founded the Aga Khan Development Network that is committed to serving the humanity without regard to faith, origin or gender. I believe AKDN is one of the largest Non Governmental bodies serving humanity to learn to stand on their own feet.

Every child, teen and an adult has someone he or she looks up to, and wants to-be-like that person and eventually becomes one. Good role models are a key to the success of a civil society, and indeed, HH Aga Khan is a great role model for Muslims to look up to.

In gratitude for his continued guidance, the Ismaili Muslims celebrate this week honoring him and reaffirming his leadership with a renewed commitment to serving the humanity.

Islam is about restoring and sustaining the harmony within an individual and with what surrounds him; life and environment. From the very first sentence of the first chapter, and the last chapter and throughout Qur'an, God is "Sustainer of all the worlds" (1:2) and "Cherisher of Mankind" (114:1) -- The message is universal and inclusive of humanity and not a particular group of people.

At present, he is one of the few Muslims in the world who has truly understood the pluralistic message of Quran. He firmly believes in pluralism and has opened an institution to propagate those ideals. Please visit the Global Center for Pluralism in Canada. At the Foundation for Pluralism, we have crystallized the definition of pluralism as "Respecting the otherness of others" based on many verses from Qur'an, but particularly verse 109:6 translation by Yusuf Ali, "To you be your Way, and to me mine."

Aga Khan delivered the following statement at the Inauguration Ceremony of Aga Khan University in Karachi on November 11, 1985, "The divine intellect Aql-i Kull, both transcends and informs the human intellect. It is this intellect which enables man to strive towards two aims dedicated by the Faith: that he should reflect upon the environment Allah has given and that he should know himself. It is the light of intellect which distinguishes the complete human being from the human animal and developing that intellect requires free enquiry. The man of Faith who fails to pursue intellectual search is likely to have only a limited comprehension of Allah's creation. Indeed, it is man's intellect that enables him to expand his vision of that creation."

Prophet Muhammad (pbuh) had said the best among you is the one who sees to it that his neighbor is fed and cared for. Imam Hazrat Ali (ra), the 4th rightly guided Caliph after Prophet Muhammad in providing the leadership to the Muslim community says, "The best man is he who is most serviceable to fellow humans." There are over 18 verses in Qur'an where God consistently talks about taking care of fellow humans. Indeed the Prophet (pbuh) expressed it in so many different ways to high light the duty to fellow beings. He he said, that an irreligious guy who takes care of his neighbor earns God's grace over a guy who is relentlessly praying.

Indeed, the beneficence of Aga Khan's Pluralism discourse can be witnessed everywhere in the world including Dallas, Texas.

Arman Rupani and his father Mr. Amir Ali Rupani, a respected philanthropist of Dallas, set in motion a historic event; Iftar Dinner with Hon. Mayor Mike Rawlings of City of Dallas. This is the first public Iftar event in Dallas area hosted by the City with it's Muslim residents. 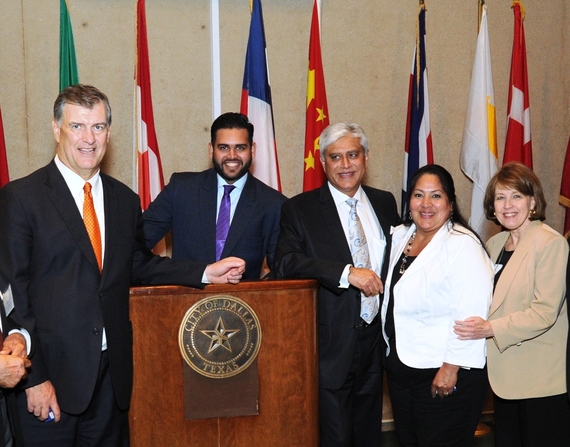 The Mayor delivered an inclusive key note address; he was all for building relations with each community in the City. He said, there are about 120,000 Muslims in the area and around 40,000 of them reside in City of Dallas. He was excited to initiate this tradition and expects wants it to continue every year. By the way, his praise for Arman was touching, and the words he had for Amir Rupani for raising a public service son made every one pause and praise this father son duo.

Thanks to Arman Rupani, Amir Ali Rupani and Akram Syed for co-hosting the event, and building relationships between the Mayor's office and the Muslims of Dallas.

The honored guests included; Mayor Mike Rawlings of Dallas, Deputy Mayor Pro Tem Monica R. Alonzo of Dallas, former Mayor Dr. Arjumad Hashmi of Paris, Texas, Council Member Dr. Shahid Shafi of South Lake and most of the Imams of Shia and Sunni traditions, and some of the most active Muslims of Dallas Fort Worth.

The purpose of every religion and the work of every prophet, messenger or peacemaker was to build cohesive societies, where no human had to live in apprehension or fear of the other. Indeed the ultimate goal of Islam as I understand is to bring harmony and peace to the societies achieved by knowing each other and building relationships.

Indeed God has created us into different tribes, communities and nations (Quran 49:13). It was indeed his choice to create each one of us to be unique with our own thumbprint, eye print, DNA, color and taste buds. Yet, the whole creation was put together in perfect balance and harmony (Q55:7); Planets and plants were programmed to operate with precision (Q55:5) year after year, and humans were given the free will with a responsibility to maintain that balance for their own good or perish like the earlier species through climate changes or conflicts.

God knew such diversity is bound to create conflict and mess up the delicate balance, so he encourages us in the same verse 49:13, that the best among you are the ones who know each other. Indeed, knowledge leads to understanding and understanding to acceptance and appreciation of the God given uniqueness of each one of us, and with that conflicts fade and solutions emerge.

One shining example that stands out is His Highness Aga Khan, who has struck a perfect balance between the life here, and life hereafter.

One shining example that stands out is His Highness Aga Khan, who has struck a perfect balance between the life here, and life hereafter.We wish a very happy Imamat day and Khushali to the Shia Imami Ismaili Muslims and blessing of long life to the Hazar Imam HH Karim Aga Khan. Amen!

This writer was a former commissioner at City of Carrollton.

Mike Ghouse is a speaker, thinker and a writer on pluralism,Peace, Islam, Israel, India, interfaith, cohesive work place. He is committed to building a Cohesive America and offers pluralistic solutions on issues of the day at www.TheGhousediary.com and www.MikeGhouse.net