Earlier this year, French neuroscientists achieved a remarkable feat. Hacking into the brains of mice, they switched the emotional character of their memories, turning a neutral recollection into a positive one.

Now, neuroscientists at the Massachusetts Institute of Technology's Tonegawa Lab have taken another major step forward in the science of memory manipulation. In a study published this week in Nature, the researchers succeeded in reversing depression-like behavior in mice by artificially reactivating happy memories.

The findings could have some exciting implications down the road for the treatment of depression in humans. If scientists are able to manipulate the brain cells where memories are housed, we may one day be able to develop pharmaceutical therapies for depression that are more targeted than antidepressants, which work across the entire brain.

"For treatment, we'd first have to isolate a particular memory and then artificially activate it at will," Steve Ramirez, a graduate student at the university and the study's lead author, told The Huffington Post in an email. "As of now, we can only really do that in animals and for humans we're using our data simply as a basic science framework for how these circuits operate and how we can tinker with them."

How did they do it? First, the researchers exposed the mice to positive social experiences, which allowed them to isolate the brain cells that held the happy memory of the experience. Then, they tricked those brain cells into responding to pulses of light. Some time after the social interactions passed, researchers were able to reactive the positive memories by shooting a beam of light into the brain cells where they were stored.

Then, the researchers induced depression-like symptoms -- such as giving up easily on a challenging task and losing pleasure in enjoyable activities -- by exposing the mice to ongoing stress.

When the brain cells were reactivated, the mice showed a complete reversal of the depressive symptoms. They demonstrated renewed motivation and ability to experience pleasure for the duration of time that the memory was activated.

However, engaging in positive social experiences after becoming depressed didn't have the same effect and led to only small improvements in symptoms. 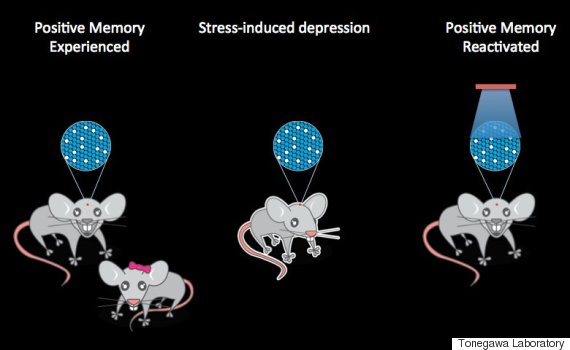 A new treatment for depression? Does the finding mean that simply conjuring up happy memories can help a person get out of a depressive episode? Probably not.

As Ramirez explains, a common symptom of depression is the inability to derive pleasure from positive memories or even to recall them in the first place.

"We can't just ask someone to 'think positively' because their brain is exactly in a depressed state that prevents them from doing so," Ramirez said. "It would be like asking someone with a broken leg to walk it off -- it requires a physical intervention to fix, as does a broken piece of the brain. Our intervention was to go in and jumpstart or 'hotwire' that memory and force it to become active."

Ramirez hopes that scientists will one day find a way to prevent depressive symptoms from occurring in the first place.

"Imagine stimulating a positive memory artificially over and over again prior to a very stressful event, and imagine that you're... a lot more resilient to that event as a direct result of these positive memories," said Ramirez. "It would be like a protective mechanism."

Other members of the scientific community, including National Institute of Mental Health director Tom Insel, agree that the study shows promise.

"This is a big step toward helping to understand not only the underlying circuits for a really serious illness like depression, but also the circuits that underlie treatment," Insel said in a statement.