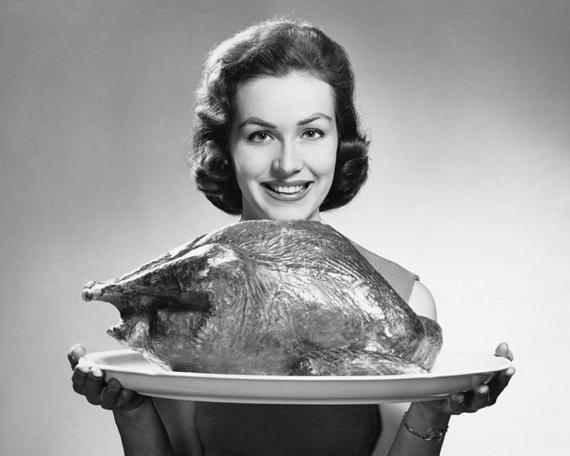 Yes, ladies, Thanksgiving, Momsgiving, whatever you want to call it, is here, and you know what that means for us.

Hours of cooking! Distant relatives! An overwhelming urge to run far, far away!

It all begins in early November with the dreaded question, the one that leaves us sweaty and depressed:

"What are we doing for Thanksgiving?"

To this, you have several answers -- "Flying to Vegas!" "Driving to Daytona!" "Getting away from all you people!" -- but sadly, you know that none of these will be acceptable to your family members, who want nothing more than to sit around eating the food you cooked, er, I mean, spend time with you.

Because of that, you say what you do every year, the same five dreaded words:

Spend 13 hours dusting and mopping guest room, living room, kitchen, and kids. Remember annual tradition of Hiding of the Liquor and Questionable Movies, as well as all-important Clearing of the Internet Browser.

Rush to grocery store after work. Quickly become just another frantic woman in overpriced fleece, pillaging piles of yams, potatoes, rolls, etc. Hustle past crying babies and slamming carts, and nearly get into fight in grocer's freezer over last bag of noodles. Despite craziness, don't forget to pick up most important item on Thanksgiving list.

Must start prepping and cooking in wee hours of morning. Exhausted already, you begin to hold conversations with turkey such as:

Crunch time. Dash around kitchen, simultaneously preparing yams, potatoes, stuffing, corn, gravy, rolls and turkey. Trip over relatives as they belatedly try to "help." Resist impulse to scream, "Get the hell out of my kitchen!"

Wonder if is too late for drive to Daytona.

Try not to drip blood, sweat and tears into turkey while carrying to table. Sit down, say grace, appreciate loving faces, and watch as they cheerfully devour the food you spent 11 hours preparing.

In exactly four minutes and 45 seconds.

Well, folks, there you have it. I've pleaded my case. With this, the average American mother's schedule during the third week of November, I proudly declare it not Thanksgiving, but Momsgiving.

Now if you'll excuse me, I have to go. There's lists to write, plans to make, much to do, and soon I will be just another frantic woman in overpriced fleece.

On a flight to Vegas.