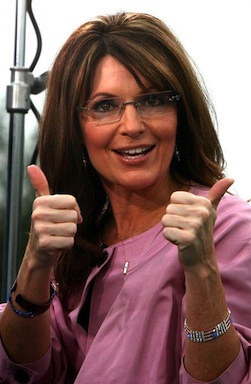 I thought I really ought to be send you a Valentine's Day greeting today, because I fear that next year you will be forgotten by all but your most rabid and demented fans. The more we learn about you, the less impressed (and more shocked and often nauseated) we are, the more we harden our suspicion that you really ARE an empty vessel, a vacuous, amoral small-town grifter with an eye for nothing beyond the main chance, the next pay-day and the next photo-op. Sunlight, they say, is the best disinfectant, and they're not wrong. But for you, the one most sorely in need of disinfecting, sunlight has the same effect it does on vampires. It eats away at you little by little, rotting you until nothing is left. The next time I address you it won't be in the form of a Valentine's Day greeting -- it'll be an anti-panegyric preached over the coffin of your political ambitions.

I will miss you when you're gone. Your entertainment-value quotient is off the charts, especially for "over educated", cultural-elitist snobs like me. There's the maddening little sing-song delivery of your speeches, with those weird, unmotivated upticks and misplaced emphases that suggest you are literally reading "your own words" for the very first time. For anyone who appreciates real oratorical skills, like those of Churchill, MLK or Pliny the Elder (you can google all these names, sweetie), it's like having knitting-needles kicked into one's ears over and over again. There's your matchless ability to grind grammar and syntax into a non-intelligible word-pulp containing the odd sharp, indigestible fragment of John Birch ("Bomb Iran!") or Jesus-Freak ("More Divine Intervention!") insanity, the frequent cheap slurs against your political enemies -- who, I can't help noticing, are sprouting up even in the madder precincts at your own end of the political spectrum -- and the usual genuflections towards Boy Jesus and Saint Ronnie (who I bet wouldn't touch your ass with a forty-foot pole). And then there's your sorry history of climbing towards the top over the corpses of the people who helped get you into office in the first place. It's like a pathology you can't seem to conquer. I don't think there's a step you've taken on your long (albeit short) march to infamy that hasn't featured the wholesale betrayal of the most recent tier of your erstwhile political mentors -- the corpses of the disgruntled and thrown-over now surely make up a substantial percentage of the Alaskan electorate. No wonder you quit your job.

And I love your unmatched ability to pick fights with almost anyone, especially your own team members and handlers during last year's election. There's enough resentment and loathing among that group to guarantee you'll have a hard, nasty ride in the primaries come 2012 -- except I don't for one minute believe you will run for President. Deep in your cold, flinty little excuse for a heart, you know as well as anyone else that you're not fit to boss a taco truck, let alone hold the reins of state. Your Nixonian hatreds and resentments are part of the public record -- remind me what your state-trooper brother-in-law's name was, or the name of that guy you fired for not breaking the law and firing the bro-in-law for you? -- and sooner or later, even your least discriminating, most intoxicated aficionados will take note of them and feel their gorges rising -- as no doubt they have whilst watching your yoga-like, pretzel-bending exertions in re: Rush Limbaugh and "Retarded."

And talking of aficionados and all that "Run, Sarah Run!" jive, did you happen to notice that the room you addressed last Saturday was only half-full, with a mere 600 souls gathered there -- for the price of $549 dollars a pop -- to hymn, laud and exalt you? They were the ones devoted enough to pay to hear you speak, who didn't care about the massive speaker's fee you pocketed (with vague promises of using it to support Tea Party-ish candidates -- promises you'll soon break, like all the other promises you make), the folks who really are dumb enough to believe that "someone just like me" is capable of running the country, the ones who laughed at the "TelePrompTer" joke even as you used a TelePrompTer of your own, and the ones who think that scrawling a cheat-sheet on your palm is a sign of genius and guts (and not a primitive, pre-digital version of a TelePrompTer -- irony not being one of their/your strong suits).

The polls are starting to reflect a growing weariness with all your white-bread, small-town scams and poisonous airhead utterances. Last week a republicans-only poll of likely contenders for 2012 showed you in a distant second place to robotic Thunderbirds puppet Mitt Romney. He has spent billions of his own ill-gotten buckage to secure the princely figure of, oooh, 14 percent support for his putative presidential bid. You on the other hand, limped into second place with seven percent of the tally, barely beating out all the other scurrilous, ice-hearted has-beens and never-will-bes on the list (Huckabee, Gingrich, et al). And another poll showed unfavorables towards you that should put paid to any presidential ambitions you might harbor -- and here I reiterate my certainty that you will find the note-perfect, "I'm too pure for this" rationale for NOT running, and instead resuming your role as right-wing America's pallidly-pigmented equivalent of Oprah.

Given that your insatiable, almost neurotic appetite for ink, flashbulbs and headlines hasn't flagged for one second since you were plucked from the frigid tundra 18 months ago, it seems that the more we get to know you, the less we want to know.

Americans are finally waking up to your game, girl, and fewer and fewer of them display any inclination to play it. Happy Palintine's Day, Sarah, there won't be another.