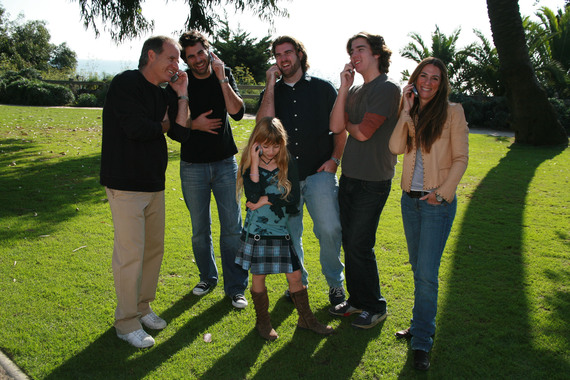 I wrote Raising Children That Other People Like to be Around because, after 36 years of marriage and four children, I believe that being a good parent requires setting a good example -- and having a positive relationship with your spouse is the first, most important step in creating a model for loving interaction. So here are some simple tricks that I have found helpful in keeping my marriage and family a happy place.

1. Greet each other with love.

No matter how my day is going, when my caller ID tells me my wife is calling, I've learned to answer my phone, no matter what my mood, with "Hello Beautiful" or "Hello My Love." It's much better than "Yea?" or "What?" -- and like most things we say out loud, the more we say it, the more it becomes so.

The Battle of the Sexes is a long-running and humorous one, and I have to be honest when I say that we men have a non-malicious, humor-oriented way of denigrating our women... just for the fun of it. I've heard that women do the same -- and none of us take that stuff too seriously (I hope), but -- like "Hello Beautiful" -- if a man calls his wife the "Ball and Chain" or constantly comments about his "henpecked" state of affairs, sooner or later the verbal images will create the reality.

Early in our marriage, I was telling JoAnn a joke that characterized the wife as a "Ball and Chain." She simply asked -- "Am I a ball and chain?" "No." I replied. She continued, "Is there anything in your life that I keep you from doing -- besides maybe having sex with Keira Knightly (which would require a lot more than my consent)?" "No." "So, I don't think you need to perpetuate that stereotype in this relationship."

What's important in this story is that JoAnn was not and is not a ball and chain. I've never had to complain her nagging me, condemning my need to play sports, or going to bars with my friends. She was and remains secure enough to know that my life with my friends is an important component in the success of our relationship. That's the give in this give and take.

3. Remember: You chose each other.

Relationships are deliberate. We find someone, we enjoy their company, we like them more than other people, we love spending time with them, and all of a sudden we're in an exclusive relationship and things are going really well. We share values, we share jokes, we share feelings -- all of which may be subject to change.

The work of having a relationship goes on forever. There are many good reasons you chose each other. As often as possible, remind yourself of the things you appreciate about your spouse. Mention them every once in a while. Compliment each other -- essentially saying, "I must have really good taste, because I chose you." Create opportunities for flattery.

People change, jobs change, children show up, money is steady, and then it's not. Lots of things happen that seriously affect day to day life. Staying in touch, having actual conversations, and getting things out are the best ways to keep your relationship alive.

We all have our own little secrets, but our spouse deserves to know 90 percent of what's on our minds -- if not "in the moment," then a little further downstream before it becomes a burden, or a resentment, or a complete misunderstanding. JoAnn and I have had many conversations that revealed two completely different interpretations of some interpersonal event. Those conversations are always instructive. Some of them end in apologies and some end in laughter, but they all end in relief.

4. Give your mate the benefit of the doubt.

He or she didn't really mean to say that. He or she doesn't know you've had a tough day. We all have a little alarm that detects slights, insults, or accusations, and I believe most of us have a knee jerk reaction to those things. TURN THAT KNEE JERK THING OFF. It took me 20 years to learn that sometimes I'm erroneously making an assumption about what my wife is saying, and that it's probably better for me to keep my fat yapper shut than it is to engage.

5. Think of your spouse as you do yourself.

This one can be difficult, because it's really a combination of "all of the above." The absolute secret of a successful marriage is to care as much about your spouse as you do about yourself, and to be willing to sacrifice something you really want in order to make your partner happy.

I've noted before that marriage is not 50/50, it's 90/90 -- if you both accept that you may be doing most of the work at any given time when, in reality there is probably an ebb and flow to it, you can comfortably dedicate yourselves to the common good. Ironically, working for the common good in a relationship is actually a matter of self-interest. The more you do for your mate, the more likely it is that your mate will want to do things to please you.

My parents fought constantly, and it made it very hard for me to feel comfortable or emotionally safe when I was with them. I vowed that I wouldn't repeat that mistake -- and I have worked hard to create a relationship where the "love" part outweighs the "being right" part. People are always surprised when they hear that JoAnn and I never fight. We disagree, we discuss, sometimes we fume a little -- but we always find resolution.

These suggestions are about building a frame of mind. It's not easy to surrender at the back door -- but if you can, you will always cross a peaceful and loving threshold, and that's worth it.