This blog is part of a series that explores the themes and issues raised in Farmed and Dangerous, a 4-part satirical web series exploring issues related to the food system and industrial agriculture. If you're interested in joining the conversation, please contact us at FoodForThought@huffingtonpost.com.

It is 5:00 am. It is 15 degrees outside, and the leading edge of a snowstorm that might drop up to sixteen inches on us is merely miles away. Outside in this winter wonderland, scattered about the farm in fields and a barn, are 250 pigs, nestled warmly in deep straw in their shelters or barn, sleeping soundly in great big pig piles, sharing body heat and the social comfort of physical contact. They are happy pigs. They are, perhaps, as happy as happiness. After all, everything they could ever want or desire is right at hand, or hoof, in this case. Food, shelter, water, fresh air, room to roam, to run, to play, warm, deep straw to burrow into. They want for nothing, even in the depth of winter. As they wander around their paddocks or barnyard, snooping around through the snow and even rooting up the frozen soil, they make a steady stream of quiet grunting sounds that express contentment, and communicate to other pigs where they are. The quiet grunts go back and forth between the pigs all day long. It is as soothing as the sound of cicadas on summer evenings.

Some of the pigs, those in the barn, where it is warmest, and the straw is the deepest, are only forty pounds. Others are 150 lbs. The biggest are over 300 lbs. The big pigs are so immune to the cold that when it is twenty degrees and sunny, they will dunk their heads in the water tank for fun as I fill it, trying to lap the water off their snouts as it drips off of them. Their various expressions of contentment, of happiness, are infectious. I never walk away or drive away on the tractor from taking care of a group of pigs without smiling, or often, even chuckling out loud. 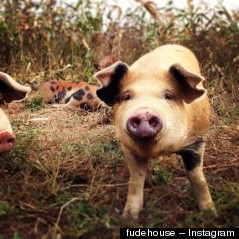 Ten of those biggest pigs are going to die tomorrow, not at my hand, but at my request. Later this afternoon, while they are napping, I will trap them in their shelter with a series of panels. Then I will back the livestock trailer up to the panels and create a sort of chute into which I can herd the pigs and drive them up onto the trailer. Once they are on the trailer, I will drive those ten pigs, those ten happy pigs, to the slaughterhouse, where I will unload them into a holding pen. Because of the storm that is coming, I cannot drop them off tomorrow, which I would prefer. Instead, those happy pigs will have to spend the last night of their lives unhappy, in an unfamiliar, strange smelling, concrete floored holding pen before they are herded one by one into a chute where they will be quickly killed.

Before 9:00am tomorrow, by the time that I have plowed out the snow so that I can feed and water the remaining happy pigs, the ten pigs that I left at the slaughterhouse will be dead. They will have been shot in the head with a captive bolt gun to render them unconscious, then a stout, exceptionally sharp knife will have been plunged into their still beating hearts in order to make all of the life giving blood that had been coursing through their veins and arteries come gushing out, creating a thick, spreading pool of crimson red on the grey concrete slaughterhouse floor. Twenty minutes later they will be pristinely lifeless, split into two halves and hanging by each hind leg from long, shiny, stainless steel hooks attached to a rail by a wheel so that the dead pigs can be rolled into the cooler so that their bodies, their carcasses, still warm from the life that was taken from them so that we can eat their meat can be chilled down to the USDA prescribed less than forty degrees. Their eyes, their very human looking eyes that in life peer out at you with an obvious intelligence, will be as still and glassy as marbles.

In the current discourse, happy pigs are the ideal alternative to the miserable and abused pigs raised in factory farms. Happy pigs become happy meat, and happy meat is good. We should feel good about eating happy meat.

Should we, really, feel good about such a thing, if it even exists? Is it so simple?

I am haunted by the ghosts of nearly 2,000 happy pigs.

[Note: About a month ago, I had my final crisis of conscience, in a decade of more or less intense crises of conscience. Having abandoned the last vestige of what seemed to be at the time legitimate justification, happiness and a quick, painless death, I became a vegetarian. I am now in the beginning stages of the complicated process of ending my life as a pig farmer.]

A version of this piece originally appeared on The Dodo

Farmed and Dangerous was produced by Chipotle and production company Piro. Chipotle is the sponsor for the Food For Thought initiative.