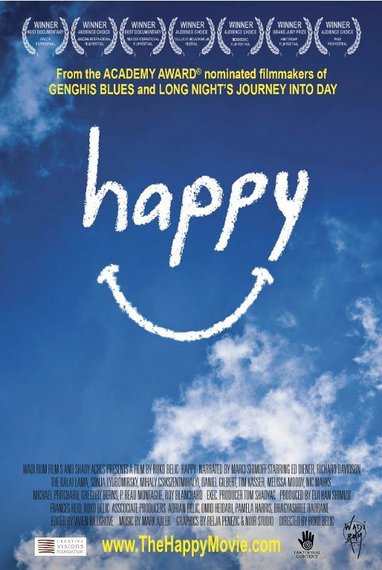 "The Constitution only gives people the right to pursue happiness. You have to catch it yourself." - Benjamin Franklin.

When a film opens with a cute, bubbly quote such as the one above, which would be equally at home on a poster in a dentist's office showing cute puppies frolicking in a field of daises, I must admit that my antennae usually go up in the worst way, and I'm scrambling to prep an insulin shot for what's to come. However, Roko Belic's 2011 documentary Happy left me with a very pleasant, if somewhat familiar, aftertaste.

Belic, who gained notoriety with his 1999 doc Genghis Blues, takes his camera around the globe, interviewing people in slums of India, the bayous of Louisiana, and other disparate locales such as Brazil, England, Scotland, Egypt, Japan, Bhutan, Denmark, Namibia, Kenya, China, and Thailand to find out what their definition of happiness is.

There is the motivational speaker who travels to American high schools to talk about the lasting scars of bullying, while also teaching the teens the value of perspective, giving an example of a time a Special Olympics team he coached shocked him with their comradery as they approached the finish line. There is the rickshaw driver in India who lives a life, by Western standards, of extreme hardship, but all he can see from his ramshackle home, constructed of tar paper and bamboo, is that an open space ("my window") allows fresh air to circulate and gives him an unobstructed view of the river.

Happy might not be the most original documentary ever made, as it's a subject matter which has been trod over numerous times by many different outlets, but it's a subject matter that defines the word universal, and remains topical and riveting, even when it nearly wears out its welcome during the film's hour and fifteen minute running time.

Of all the subjects covered, none is more harrowing than the story of Melissa Moody, a former debutante and beauty queen who was run over by truck in 1992, resulting in the permanent disfigurement of her face. After her husband divorced her and enduring years of physical therapy and surgeries, Moody found herself dealing with a plethora of repressed memories and emotions, including sexual abuse at the hands of a family member. After remarrying and dealing with her past trauma, Moody began to see her accident as a blessing, and began working with others, becoming a staff member at San Francisco's School of Self-Healing, where she was treated for vision impairment caused by the accident.

"What I saw is that in places like the slums in Calcutta, people do not have any measure of success," she says. "What I saw, instead, was that people had a strong sense of community. Their purpose in life was being part of something bigger than themselves: Being as good as they can be among their friends and families."

In many ways, the film is almost an infomercial for the "positive psychology" movement, which Wikipedia defines as "a branch of psychology that uses scientific understanding and effective intervention to aid in the achievement of a satisfactory life, rather than merely treating mental illness." From the time it originated in 1998, this field invested tens of millions of dollars in research, published numerous scientific papers, established several masters and Ph. D programs, and has been involved in many major news outlets.

Positive psychology began as a new area of psychology in 1998 when Martin Seligman chose it as the theme for his term as president of the American Psychological Association, though the term originates with Dr. Abraham Maslow, in his 1954 book Motivation and Personality, and there have been indications that psychologists since the 1950s have been increasingly focused on the promotion of mental health rather than merely treating illness. In the first sentence of his book Authentic Happiness, Dr. Martin Seligman claimed: "for the last half century psychology has been consumed with a single topic only - mental illness", expanding on Maslow's comments. He urged psychologists to continue the earlier missions of psychology of nurturing talent and improving normal life.

Dr. Richard Davidson and Dr. P. Read Montague, neuroscientists who are interviewed in the film, have identified the part of the brain that is associated with feelings of happiness, specifying the left frontal lobe as the area where the feeling originates. They also break down happiness into several different behavioral components.

First, there is connectedness, which involves building and maintaining strong relationships with friends, family and community; Generosity, giving back to the community at large and society in general has been found to increase happiness; Novelty, which involves breaking out of old routines and habits, such as choosing a new path for hike or a new route to work; Play, people who engage in regular physical aerobic exercise tend to be happier, due to stimulation of the endorphin glands; Flow, which involves engaging in a fully absorbing hobby, such as carpentry, painting, or writing; Health and longevity: there is a strong correlation between happiness and healthiness. A positive mental attitude has been proven to help people live longer.

The formula for happiness is not the same for everyone, but research shows that almost everyone is capable of becoming happier if they choose to be.

For more information on the subject of positive psychology and the science of happiness, you can visit the following websites:

Adventures in Positive Psychology by PsychCentral

Authentic Happiness by Positive Psychology Center at the University of Pennsylvania

From Functioning to Flourishing by Psychology Today

The Happiness Project by Gretchen Rubin

The Positivity Blog by Henrik Edberg