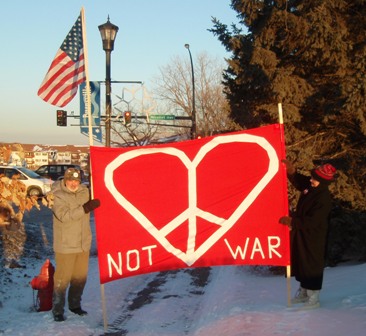 I'd banner on this Valentines Day, and I'd banner about the love (needed) between my brothers and my sisters all over this land. The similar song by Pete Seeger sounds a lot better than mine (and click here for Peter, Paul and Mary's great version), but you get the gist.

Love, not war. Peace, not war. Hopefully the message won't be too hard to grasp for the bulk of the motorists rushing by, and maybe our heartfelt banner will even attract a couple more cardiologists to our weekly peace vigil!

Our goal is just to encourage more passers-by to think about the true meaning of Valentines Day. Like our call to Sunday morning churchgoers rushing off to the hour they've compartmentalized to learn of God's love, (while during the rest of the week, they are forced to learn of their own country's participation in torture and waterboarding), our new banner calls on those who blithely enjoy Valentine candy and flowers, to think of the larger issues.

Think also about the big heart needed these days to stand up to injustice and to defend the Constitution; to face ridicule and derision for what is right, heroic and American. This Valentine therefore goes out to Senators Dodd, Feingold, Leahy and the other 29 who upheld their oaths of loyalty to the Constitution this week and didn't cave to Bush's fearmongering nor to corporate lobbying corruption to widen the "Unitary Executive's" powers to spy on American citizens. Kudos also go to Congressman Wexler who finally confronted Condi Rice on all of her Iraq War lies. We are supposed to be a country governed by the rule of law. For the love of our nation, let's request our elected officials re-read Article 1 again. It came first for a reason. We are not ruled by a king.

If we get enough honks of approval for our "love, not war-- peace, not war" special banner this Valentines Day, we'll probably try to make up some more for the vigils we're planning for early September when the Republican National Convention comes to town. Maybe we could borrow the line from John Lennon's song and make some that say "have a heart--give peace a chance!"

So what do you think? Who knows how to honk in the blogosphere for a happy Valentines Day wish of love and peace?! 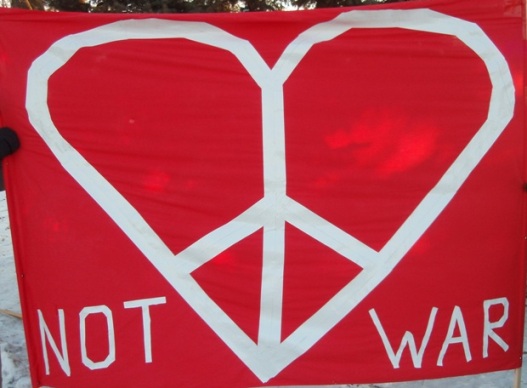 Suspected Half Moon Bay Shooter To Be Charged With Murder