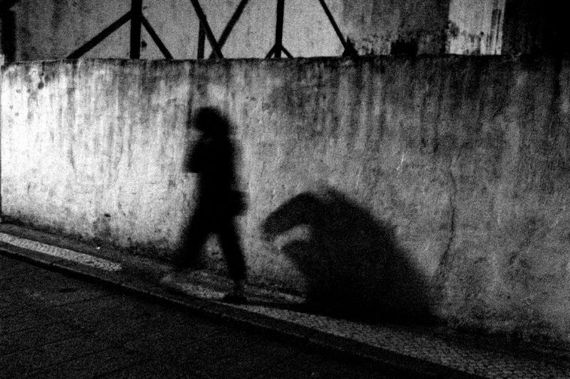 I knew as soon as the car slowed down next to me on the country road that it wasn't going to be a pleasant encounter. How did I know? Trust me, I knew.

I've been living in the same village for 20 years, and for 20 years, I've had a running loop that I love. Part of it is skirts the driving range of a golf course. People get lost all the time around here, and those people often slow down and ask directions. But the car that pulling up next to me had come out of the golf course parking lot. So, a local who probably wasn't slowing down to ask for directions.

And in 20 years, there is only one kind of person who slows down for any other reason than to ask me directions.

"Hey, don't hurt yourself running too fast on this downhill stretch."

Men who tell me to run faster, to run slower and talk to them, men who applaud as I pass, men who point out the scenery as if I hadn't noticed we were surrounded by mountains. Men who pull up behind me and honk, then speed away as I gather my heart up from the pavement.

I've tried smiling and carrying on, I've tried polite conversation, I've tried telling people to leave me alone. In all my years and through all these encounters, it has never without at least one person taking affront and without one person annoyed or angry and/or afraid (me, always me).

I glanced over at the car, and saw a white-haired guy in his mid-60s, decent-looking enough to probably consider himself still the ladies man. He was grinning and pulling his car ever closer to me as I continued running.

I am no spring chicken myself. I'm in my mid-50s, and I have been dealing with this kind of nonsense for 40 years. Forty years!

"I said, you gotta be careful not to run too fast here."

"Okay." What is it that makes men think I don't know how to run? I'm in running gear, and I'm already running. Oh, wait. I know. I'm female. I nod at him and hope he'll drive away.

And there we have it. I've already given offense. I suppose I should mention here that this all takes place in rural France, and in French.

"I'm just being polite," he says, except he's frowning.

"I didn't start this conversation."

"Why don't you go back to where you came from!" He can hear my accent, and is steamed. So now we have both unwelcome attention and anti-foreigner sentiment.

"Why don't you leave me alone?"

"Bitch! Fuck you! Go back to England!" This in French-accented English. Clearly a fan of English-language films. I wave him off.

"Fuck you, bitch!" Now he's swerving dangerously close to me and yelling.

I've stopped running and tell him I'm going to report him to the golf club (for what? It doesn't matter. In my experience, saying I'll call the police might prompt him to actually stop and get out of the car, and I want him to go away.) I check his license plate and he speeds off, repeating what I assume are the only three curse words he knows in English. I call out a couple of other ones behind him to enrich his English vocabulary, and I resume running.

Then I see him pull around a hedge at the end of the golf course, stop his car, and wait for me.

Great. Now I have a situation on my hands, and there is absolutely no one around.

Why couldn't I have just smiled?

(Before we continue, I'm going to footnote a comment* that I'm sure some people will make at the end of this piece, and I want to pre-empt that by saying: No, I shouldn't. That attitude is precisely part of the problem.)

Like most women, I started getting unwanted comments when I hit puberty. A veil lifted and all of a sudden I was on unwillingly display. The grandfatherly comic book distributor who offered me a ride on a country road when I was 13, then asked what I would do if he were to rape me. The guy in his 30s with chest hair combed over his collar line who hit on me on a transit bus the same year.

Felt up, felt down, groped, then later, pushed, punched, hit, cornered (lost count of how many times). Choked (once) and followed and nearly raped (so many times). By men I didn't know, with whom I was sharing street space, or beach space, public transit space, or hallway space, or breathing space.

And this lasted through several moves, from my native California, to Germany and Japan, to Switzerland and now here in France. It has occurred in dozens of other countries I visited, all through my teens, 20s and 30s.

Then a strange thing happened. In my 40s, I became invisible.

The veil that had been lifted in my teens descended again, and men couldn't see me. I figured I'd aged out. I'd had a child, my figure had gotten wider and looser, and suddenly, men looked in my direction and didn't see me.

It was an odd sensation, but not unwelcome. I could walk along and not have anyone demand a response from me. I started to get an idea of what it must be like to be a man, not feeling a sense of fear on a daily basis because I might accidentally insult someone else's sense of self.

But then I found out that it also meant it was harder to get any kind of attention. Male waiters completely overlooked my table, if I tried to get assistance in any way, men (not women) looked right through me, male colleagues talked right past me to other male colleagues.

I'm talking about not being seen at all.

That went on for a few years and to be honest, it is still the case most of the time. By and large, as an older woman I'm invisible to men.

Until, that is, I'm not. Like when I'm running alone.

The golf guy in the car almost ran me down. Who knows what he planned on doing had I run past where he was lurking with his car? Does he have any idea how frightening he is as someone whose masculinity is so fragile, someone who feels so entitled, that he can take abusive affront when a stranger doesn't want to chat.

I wish I could say he was an anomaly. But with statistics showing that 99 percent of women report having been verbally harassed at least a few times in their lives, it's life as we know it.

What happened with my English-cursing admirer? I don't know. I turned off my running stopwatch, turned around, and ran up to the golf course to report him because by that point I was actually afraid he would do me physical harm. At the golf club, I was informed in the friendliest tones that "he was probably just trying to be nice."

By the time I got back on my running loop he was gone.

I will be running with a rape whistle for the next few weeks, until I feel invisible again.

*Here's the footnote: Plenty of people tell me I should be flattered for the attention. If men think I'm good looking, 'particularly at my age,' I should be happy to be acknowledged.

To which I say: In no way should I be made to feel guilty for not welcoming the imposition of unwanted, entitled, and intimidating attention.

Whether at 14 or 50, this attention isn't about me; it's about someone demanding that I pay attention to them, for their own gratification, whether I want to give it or not.

Women who tell me it's because I'm running alone, or on a bus alone, or in the presence of other humans, you are perpetuating the bias that we are responsible for unsolicited attention and aggression simply by virtue of being.

Men, please, before you demand that a woman be grateful for your unprovoked commentary on her presence or validate you by responding, consider that this is about your needs, your wishes, your demands. It's your problem, not hers.