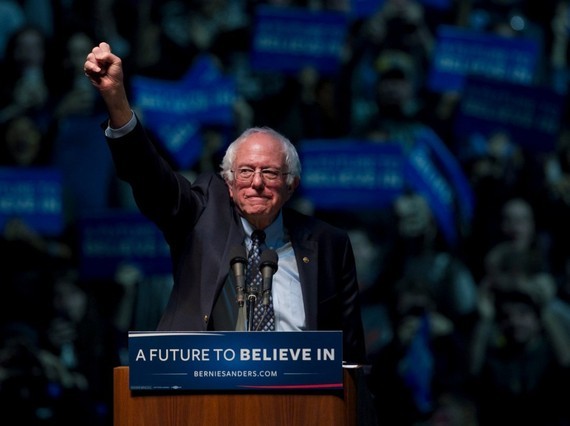 The Democratic primary race changed fundamentally -- indeed, radically -- after March 1st, and the national media's failure to register this and work it into their polling, projections, and punditry is one of the most wide-ranging, public, and ultimately influential journalistic failures of the last decade. In short, it's the reason supporters of Bernie Sanders have been tearing their hair out reading national media coverage that reports, and glibly, that the Democratic primary race is effectively over.

So let's expose that radical sea-change with some hard-data analysis, and thereby, for the first time, circumscribe the effects of the media's failure to catch it.

In the first month of the current, five-and-a-half month Democratic primary season, Hillary Clinton scored 60 percent of the available delegates -- 59.8 percent, to be exact.

For the sake of brevity, let's say that it's been a 51 percent to 49 percent race since March 1st.

If the rather conservative projections for the upcoming Wisconsin and Wyoming votes turn out to be correct, that post-March 1st Clinton lead will narrow to 50.5 percent to 49.5 percent -- a one percent differential -- heading into the big primary in New York on April 19th. If Sanders over-performs in these two pre-New York votes to any degree -- keeping in mind that in Alaska, Hawaii, and Washington he out-performed projections by between 40 and 50 points -- he will pull ahead in the post-March 1st delegate count.

But let's stay in the present.

Sanders is presently at 92 percent of his delegate target -- the number of delegates he needs to be "on course" to win the pledged delegate battle.

In five more contests -- Louisiana, North Carolina, Arizona, Ohio, and the Northern Marianas -- Sanders missed his target by a combined 28 delegates. That's an average miss of 5.6 delegates in these five contests, all of which were heralded as massive wins for Hillary Clinton.

(As a reminder, 2,026 pledged delegates are needed to win the pledged-delegate battle.)

Only two states have really hurt Sanders over the last month: Florida and Mississippi. Indeed, not just the entirety but far more than the entirety of Clinton's fractional delegate lead on Sanders since March 1st came from just those two contests. Since March 1st, Clinton has accrued 29 more delegates than Sanders -- out of 1,283 total delegates awarded during this month-long span -- and Clinton netted 34 delegates on Sanders in Florida and Mississippi alone.

But most of those net gains for Clinton -- 25 delegates, or 86 percent of her lead on Sanders since March 1st -- came in Florida.

And here's where things start to get interesting.

Per New York Times exit polling, 67 percent of Floridians decided which Democrat to vote for prior to February 15th -- in other words, weeks before the race began to turn in Sanders' favor, and before Sanders had made a substantial play for the state via live events and in-state ad buys.

Another 15 percent of Florida voters made up their minds sometime between February 15th and March 8th.

Of course, it wasn't clear that the race had turned in Sanders' favor until -- at the very earliest -- March 6th, the morning after Sanders won Kansas and Nebraska and came within a hair of meeting his delegate target in Louisiana.

So what percentage of Florida voters decided who to vote for after it was clear the Democratic primary was shifting dramatically in Sanders' favor?

18 percent, according to the exit polls.

And how did those 18 percent vote in the Florida Democratic primary?

Well, let's put it this way:

Note that we're not talking about older voters and younger voters here, or early voters versus Election Day voters, but simply the date on which voters made their final assessment of the Clinton-Sanders race. While it's true that early voting leads to an earlier final assessment of the candidates -- and that for this reason "early voting isn't good news for candidates [like Bernie Sanders] hoping to make a last-minute splash in the race" -- that isn't what I'm analyzing here. I've analyzed it elsewhere, however.

Let's remember, in any case, that Florida is far and away the worst loss Sanders has suffered since March 1st, as a matter of delegate math.

But surely this is a fluke, you say! What happened in Mississippi, the other state that accounts for Clinton's narrow (roughly two percent) delegate lead over Sanders since March 1st?

Well, unfortunately we don't know -- largely because Mississippi doesn't (yet) do early voting, and held its vote just 48 hours after it became clear that the race was starting to go Sanders' way.

According to CNN exit polls, however, it's likely that well under 10 percent of Mississippi voters made their decision about who to vote for on March 6th, March 7th, or Election Day. So while we know that Hillary Clinton won Mississippi over Sanders by 66.1 points, and, from CNN exit polling, that that margin was more than 10 points tighter -- 56 points -- among Mississippians who decided who to vote for in the last week before Election Day, we don't have a breakout for the 48-hour window before the votes were counted. This means that, while we know Sanders was beginning to close the gap as the final hours ticked away in what turned out to be one of his worst performances of the election season, we don't know by how much. We know he reduced Clinton's lead by at least 15 percent (10 of 66 points) among late-deciding voters, but if what happened in Florida also happened in Mississippi, the late-late-deciding voters -- the ones who'd seen Sanders' strong performance on March 5th -- may well have been even more favorable to Sanders than that.

In nearly every state that had it, early voting hurt Sanders in substantial part because it pushed more and more voters to make a final assessment of the Democratic primary campaign before that campaign had turned dramatically in Sanders' favor.

And this, again, is why the Clinton campaign pushed for as many voters to vote early as possible. All the data they had suggested that the race would turn in Sanders' favor around March 5th, so they needed to "bank" as many votes as they could in advance of that happening.

The point here is that Hillary Clinton has been losing the primary for a month now in votes cast after the race began to favor Sanders on March 5th. This means that most of the projections the media is making about how Bernie Sanders will do going forward are based on election results, exit polls, and voter surveys compiled before that critical March 5th date.

In other words, if you're a supporter of Bernie Sanders and you feel like you're stuck in the Twilight Zone every time you turn on cable news or listen to pollsters and professional pundits, you're absolutely right to feel that way -- because the nation's election "experts" are perpetually reporting "live" from March 1st, 2016.

Fortunately for Sanders and his supporters, today is March 30th.

This also helps explain why Sanders beats Trump by more than does Clinton in every national head-to-head poll and in more than 90 percent of battleground-state polls. He's faring so well in these polls because most were taken close to or after the end of February. It's the same reason you can ignore the red-state exit-polling data-dump we've been getting from The Washington Post lately -- as it focuses exclusively on polls in Alabama, Arkansas, Georgia, Tennessee, Texas, and Virginia, all of which voted before things started to turn for Sanders. The original research done here involving Florida, Mississippi, and North Carolina -- which voted well after the "SEC primary" and after the turning point in the nominating season -- shows that these much older exit polls have lost their relevance. Likewise, Election Day results in Arizona, Ohio, Missouri, and Illinois reveal that the shift toward Sanders is not just evident in the South, but in the Southwest and the Midwest as well.

In fact, it's a national trend.

And it's one the media has missed entirely -- largely because they stopped paying much real-time attention to the Democratic primary following the "SEC" voting -- which, to them, seemed to seal the deal for Clinton.

Except that it didn't.

So when you're reading media predictions about the next twenty-plus nominating contests on the Democratic side -- and the awarding of the remaining 40 percent+ of all Democratic delegates -- ask yourself, are these projections based on what happened in the first month of the five-and-a-half month Democratic nominating process, or anything that's happened since?

And for those wondering how much weight to give the predictive powers of this columnist, consider this: FiveThirtyEight.com predicted Sanders would win Alaska by 8, Hawaii by 8, and Washington by 17. I predicted Sanders would win each of these states by "between 35 and 50 points." Sanders won Alaska by 63.2 points, Hawaii by 39.8, and Washington by 45.6. FiveThirtyEight.com predicted Clinton would win Illinois by 10 and North Carolina by 12; I said that these predictions were missing late polling data suggesting a momentum shift for Sanders -- and indeed Illinois was decided by only 1.8 percent and Clinton only beat Sanders on Election day in North Carolina by 52 percent to 48 percent.

The projections I made were based on the fact that something fundamental changed in the Democratic primary race after March 1st. The national media would do well to acknowledge this also and start asking what it means for the next two and a half months of Democratic primaries and caucuses.