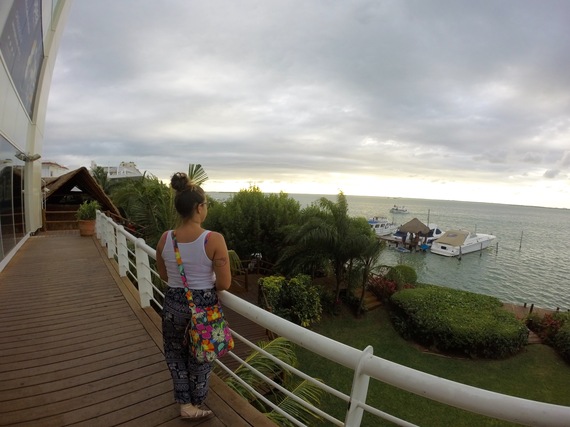 I talk up sobriety. That's because 99.9 percent of the time it's amazing, and it has definitely transformed my life. I want more people to know how great it is so they can try it themselves. But I wanted to get real for a minute in this post because I want people to know that being sober isn't always easy. Sometimes it can be hard. That's not to say it's impossible or that you shouldn't try this way of life, but just like in life, there are good days and bad. These are the hardest parts about being sober.

When I was using I had no boundaries. I used people and people used me. I had "friendships" and "relationships" with people who I had nothing in common with and who I didn't even like! I would ditch loyal lifelong friends for whoever was my person at the moment. I got metaphorically high off of keeping the rolodex of people in my life straight and when one person wasn't giving me what I wanted it was on to the next. In sobriety I've had to try hard to put up and keep boundaries. I've learned that I don't HAVE to be best friends with everyone that attempts to be in my life and that's ok. I've also learned that people change and grow in opposite directions and that's not necessarily a bad thing. It's hard navigating my way through boundary settings and the guilt I feel when I'm not acting the way someone thinks I should be acting or living up to the expectations others have set for me. Staying true to myself and my intuition helps. Like a wise friend told me recently, if someone isn't making you feel good -- maybe it's time to reevaluate if they should be in your life or not -- stop letting them inadvertently hurt you. This life isn't a game for me, I stopped playing games when I got sober and sometimes I have to remind myself drama can't happen if I don't engage.

I'm a person that is fully supportive of people being themselves and living their truths. But where is the line between someone just being who they are and being an asshole? There are a lot of gray areas and this is something I've come to understand in sobriety. Gray areas are especially difficult to me because I am a Gemini and love to look at the world in black and white: Yes or no, wrong or right, good or bad -- there are no in betweens. A blind assumption I had when I first got sober was that other people who are sober are nice people who are (like me) no longer sick. Big mistake that was! Did you know just because you're in recovery doesn't mean you're not an asshole? And just because you might be working a 12-step program doesn't mean you're not still sick? Mind blown. I quickly readied myself when someone told me in early recovery that "once you start getting well, you realize how sick everyone else is." But I didn't know this meant sober people too. On a lot of days this is hard for me to accept.

Another part to gray areas is seeing others points of views while still holding strong to my beliefs. I can express my views calmly and in an intelligent manner. I don't have to be an a-hole and I don't have to retaliate if someone is being like that to me (like I have done in the past). For example, when I quit my 9 to 5 job in March I felt like I was being treated unfairly by a manager and all I wanted was to be able to explain myself to my boss but I never got that chance. We agreed it was best for both sides if I didn't work there anymore and I never got to stand up for myself like I wanted. I often wonder if I had told my side of the story, would it have changed anything? Leaving it at that gray area is exceptionally hard for me, but it's something I am learning to do in sobriety.

3. Flashbacks of your former life

Forgiveness. Why is forgiving yourself so damn hard?! One of the hardest parts of my own recovery is making peace with my past and who I was during active addiction. Flashbacks of blackouts and bad decisions still haunt me to this day. I'll go through periods of feeling fine and being really confident that I am a good person and knowing that before I was hurting and my actions were a result of my disease. Then I'll have days where I'll remember specific moments and they'll make me physically ill and I'll think how could I have done that? What was I thinking? Will I have to feel this way for the rest of my life? These feelings are what make some people pick up a drink or a drug, so far I haven't, and I know that eventually those feelings pass, but it's still hard. Forgiveness is an ongoing process I think I'll be doing for the rest of my life.

Balance -- that's a funny word that I've never really liked. It's another hard part about being sober. For someone like me who always wanted more, more, more when it came to drugs, alcohol, men, and life, balance is a foreign concept. This has been ringing even more true for me in the exercise area. You all know I've had 6 knee surgeries and soccer is like breathing to me. Having to turn down teams and games because of knee pain and sickness is so incredibly hard for me! But I'm learning it's all about balance -- physically, emotionally, spiritually -- and that is difficult. When you haven't had balance all your life it's kind of unrealistic to expect that you'll have it all figured out in two years of sobriety -- which brings me to my next hardship.

Expectations are the devil aren't they? I know I'm not the only one when I say I play out every situation in my head thinking about the way I want it to go and how everyone should act. I didn't even know what expectations were until I got sober. When I was using I had unrealistic expectations for everyone, including myself, and I was sorely disappointed when things didn't go my way. These feelings of disappointment and anger drove me to drink (among other things.) It also put me into a state of constant despair and feeling as though no one understood me and I would never be satisfied (and I wasn't). Living sober I've had to learn about expectations, where they come from, and why I have them. I've learned life will never go exactly how I expect it to and that if I want to be happy I need to give up my expectations. This is extremely difficult for me, but I'm learning and life is getting better as I do.

Mostly being sober is nothing short of amazing, but it's not always easy. It's a constant process of self-growth and discovery. I've had to revaluate my entire way of living and coping, and sometimes it's hard. Despite all of that I would take the relearning and discovering myself over dependence on drugs and alcohol any day. I still get to wake up every morning free from hangovers and the shame of last night. I am willing to put the work in for my sobriety because the pain from growing is healthy and rewarding, while the pain from active addiction is a dark, shameful cycle that can end in death.

I've said it before and I'll say it again -- sobriety can be hard, but it is ALWAYS worth it!

This post was originally published on The Adventures Of The Sober Señorita.