Recent discussions about inequality have focused on wealth inequality, and with good reason. Thomas Piketty's book "Capital" explores the idea that wealth is now more concentrated than income. According to the U.S. Center on Budget and Policy Priorities, the top 3 percent of Americans earn 31 percent of income, but they also own 54 percent of all assets. Wealth gains have far outstripped income gains.

"Hard Times" by Tom Clark and Anthony Heath tells the other side of the story -- income inequality. It confirms what most of us already sense, that happy times are here again for some, while others -- and in fact most others -- continue to struggle in the aftermath of the 2008 Financial Crisis. It describes how desperate life has become for the working poor in the US and the UK. As the authors pessimistically conclude about their subjects, 'it is outright impossible to offer them any reassurance about when their hard times will end.' The data they serve up is as devastating as the personal interviews that make their conclusions inescapable.

Both Piketty and Clark say that politics, not economics, will determine the future. However, the economy will certainly be a major focus of upcoming election debates in both countries. The real question is, will the electorates in the US and the UK stage a revolt? Will the minimum wage, unemployment, and income inequality take center stage? Will the Invisible Man become visible? 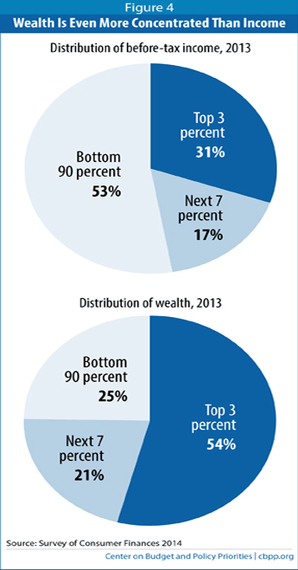 On the other end of the spectrum, extreme wealth is highly visible. Oxfam's Wealth, Having It All and Wanting More puts the wealth of the world's richest eighty people into perspective:

The wealth of these 80 individuals is now the same as that owned by the bottom 50% of the global population, such that 3.5 billion people share between them the same amount of wealth as that of these extremely wealthy 80 people.

What policies can counter this? Oxfam has an ambitious list, which includes the obvious along with the impossible. "Hard Times" offers a simpler prescription: 'Jobs, fairer shares, and a decent safety net'. Without a doubt, it all begins with jobs that produce both income and a social dividend. This is true globally.

Case in point: does anyone believe that the Middle East can become peaceful when 80 percent of young men there are unemployed? Or that Spain can prosper with a 50 percent youth unemployment rate? Should we be surprised at the sociology of Ferguson and the conflict between citizens and the police in the US in areas of high unemployment? Multiple system failures have combined with a drastic shift in the job market due to outsourcing, technology, and overall productivity gains to create a large group of people who will never be able to catch up. In terms of a safety net, a recent success -- the Affordable Care Act (ACA) has resulted in an impressive jump in health care coverage, especially for young people. But the ACA was hugely expensive politically to implement, and entitlements cannot replace jobs.

Looking deeply at inequality with one very sharp lens can shed light on the worldwide challenge. "Hard Times" is focused on the English-speaking world, particularly the US and the UK. The inescapable conclusion for me after reading this book is that if rich developed countries can get things this wrong, where does hope lie for the developing world?

It is worth taking a look at the Charles Dickens novel of the same title. "Hard Times" was a counterargument to utilitarianism, the idea that a good society was one that produced the greatest happiness for the largest number of people. It was also a call to humanism, a view that happiness and a good life could not be based upon a mathematical average. Clark's book says that an existing trend towards inequality strengthened as a result of the Great Recession. But the underlying logic of what true equality means is the same. Even if overall economic conditions have improved on an average basis, as they have today, that is far from saying that suffering has been eliminated. Clark's argument, as highlighted in the subtitle of his book, The Divisive Toll of The Economic Slump is that in fact the misery has intensified even if the world as a whole has grown wealthier. More jobs have been created, but they don't pay as well. Growth has been restarted, but the wealthy are the primary beneficiaries as their assets increase in value.

So how does the Great Recession differ from the Great Depression? During the Depression, the poor suffered the most. But in what Clark calls our new hourglass economy, the middle class, not just low wage earners, has perhaps been damaged most of all, losing their formerly comfortable lives.

For poor people to be left behind as average incomes rise is nothing new in the Anglo-Saxon economies; but--in Britain at least--for stagnation to have set in the middle like this, and at the height of a so-called boom, is something disturbing and different. In the light of the great growth grab by the top 1%, it is worth checking whether it is not merely the lowly and modestly-paid who have been squeezed, but also those who might previously have thought themselves to be perfectly comfortable.

Clark follows up with a chart that shows a significant decline in real wage growth since the Great Recession for all wage earners, from middle managers to hourly service workers: 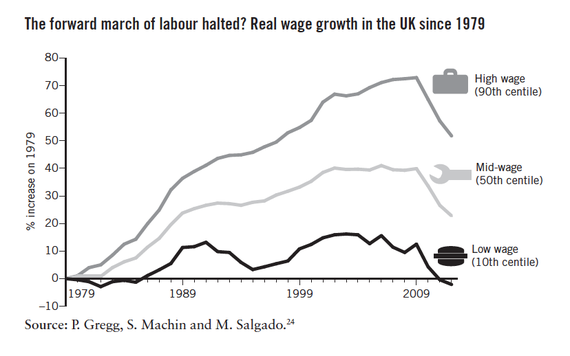 For the top 10 percent of earners however, wages have been increasing. The bottom 90 percent of earners has had either stagnating or declining real income for more than a decade. Clark describes the consequences of the loss of economic security, hope, and discretionary time and income this has created for the great majority of British citizens, resulting in what he calls a 'social recession'. Happiness, as FDR understood, matters.

By nature the longest lasting issue is the effect of the Great Recession on young people, which brings us back to the demographic challenges ahead. Our economy has changed since the Great Depression; a world that valued physical labor and so older workers suffered most, but average life expectancy was under 60 years. Today experience and judgment are critical, especially in white-collar jobs, and older workers who can expect to live to the age of 80 might not have enough savings to retire. In contrast to the Depression, younger workers have been disproportionately and adversely affected by the Great Recession, especially those without employable skills, the 'unqualified young'. The rate of home ownership by young families is the lowest on record, and their debt, thanks to student loans, has reached historical highs. They have suffered most of all in employment opportunities. 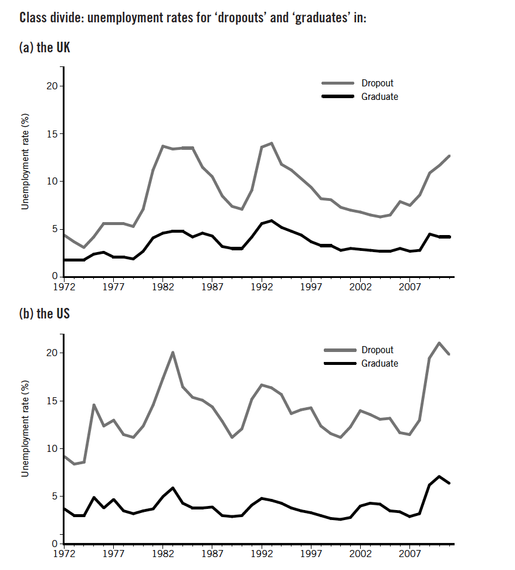 The problem is that once the young begin with a decline in wages, they never catch up in terms of lifetime earnings compared to their parents. So what is the problem and how can it be solved? I believe that Clark would endorse economist Joseph E Stiglitz's view:

Only hard choices will prevent harder times ahead. Who will make them?