Life is stressful. Financial strains, employment worries, relationship difficulties, and parenting challenges can all lead us to feel overwhelmed. But what exactly makes the difference between those who get pushed over the edge with stress and those who, when faced with stressors, actually thrive and develop? In his 30-plus years of research, psychologist and founder of the Hardiness Institute, Dr. Salvatore Maddi, has discovered that hardiness coping strategies, attitudes, and beliefs make the difference. "Hardiness" describes a personality trait characterized by resilience and the ability to cope effectively with stress. This year, the American Psychological Association acknowledged Dr. Maddi's theoretical and research contribution to understanding hardiness by giving him their Gold Medal Award for Life Achievement in Psychology in the Public Interest.

Dr. Maddi's original study on hardiness was conducted at Bell Telephone when employees, managers and supervisors had to deal with deregulation and the lay-offs and restructuring that followed. Many employees suffered adverse effects on their mental and physical well-being, but others actually grew and thrived from the stress. In-depth interviews and extensive psychological tests done years before the changes occurred revealed the traits, outlook, and coping strategies that made the difference. What was found in this research is that those who saw change as a positive challenge, who were open to new ideas, who felt confident and capable, and who problem solved rather than avoided the stress did better.

There are three traits that make up hardiness: challenge, control, and commitment. Challenge means seeing problems or stressors as challenges and opportunities. Individuals with this trait accept change as part of life and don't expect life to be easy. The second "C" of hardiness, control, means not seeing oneself as a helpless victim who is at the mercy of stressors. It involves having an internal locus of control, in other words, feeling that you can influence the course of your life and take actions that will improve your chances of achieving your goals. Individuals with this trait are generally optimistic and hopeful and feel a sense of personal power. Commitment, the third "C" of hardiness, involves having a sense of purpose and meaning in life. Persons with this trait do not just survive, going through life with little direction, instead they thrive.

Research on many groups -- including soldiers, executives, athletes, and students -- have replicated these findings: that hardiness predicts success, adaptive coping, and wellbeing. The outlook and coping approach of hardy individuals is consistent with the traits of a fully differentiated individual, as outlined in my new book, co-authored by my father Dr. Robert Firestone and Joyce Catlett, The Self Under Siege: A Therapeutic Model for Differentiation. Individuals who are more differentiated, who are living their lives based on their own unique values and desires, are open to new experiences rather than tied to routine. They can think clearly and problem-solve. They are proactive, not victimized, when faced with difficulties. They take personal responsibility for their well-being and take good care of themselves. They pursue their goals, actively seeking what gives meaning to their lives.

All of these are traits defined as hardiness in Dr. Maddi's research. He found that one-third of individuals in his original study manifested hardiness. Many elements may go into why some people are hardier than others, but one thing that has been proven is that people can become hardier with training. In childhood, parents who encourage children to feel capable to solve problems and who offer them support contribute to a child's development of hardiness traits. For those who were not as fortunate in terms of the parenting they received, there is also hope that hardiness can be learned. Hardiness training has been found to improve people's ability to deal with crises and the stress of everyday life. Similarly, we have found that people who achieve greater degrees of differentiation, by using the therapy approach we outline in the book, are better able to cope with adversity and to create meaningful satisfying lives for themselves.

In The Self Under Siege we delineate a method to develop and become a more fully differentiated individual, and therefore, more hardy or better able to cope with stress. There are four steps in the process of differentiation:

2) Recognize negative traits in your parents and how you manifest these behaviors in your own life. Noticing when you behave in a manner that is not in line with how you want to be as a person or finding yourself having an attitude that is objectionable to yourself, is the first part of this step. Could it be that these behaviors and attitudes are similar to the traits in your parents you liked the least? Changing the negative traits that you incorporated from your parents and acting like the person you really want to be is second part.

3) Give up self-soothing behavior patterns that were once an adaptation to the circumstances of your early life, that served as survival mechanisms in your past, but that now interfere with and are not appropriate to your adult life. These often include addictive behaviors and self-protective, inward approaches to life.

4) Develop your own moral compass and pursue the activities and people that make your life meaningful.

A hardy individual feels a sense of competence and a willingness to take personal responsibility for achieving his or her goals. These attitudes are consistent with those of a differentiated person. Differentiation involves identifying aversive behaviors and faulty programming in the family and in society. It involves developing insight into the relationship between these factors and one's "critical inner voices," a self-destructive way of thinking that both causes and enhances personal distress when faced with challenges. It involves understanding the source of these problems and modifying one's negative, self-sabotaging attitudes, personality traits, and behaviors.

As people differentiate, they feel a deeper sense of personal power. Personal power involves strength and confidence and the ability to pursue what really matters to you. The more differentiated a person is, the more he or she will be able to deal effectively with adverse circumstances and to see challenges as opportunities. In the United States, given the current economic crises, the stress of almost 10 years at war, and the generally fast-paced, competitive nature of our society, we could all especially benefit from becoming more differentiated, and therefore more hardy.

Learn more about The Self Under Siege 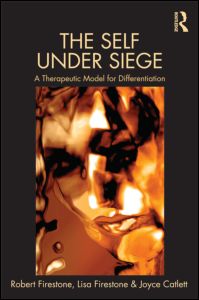