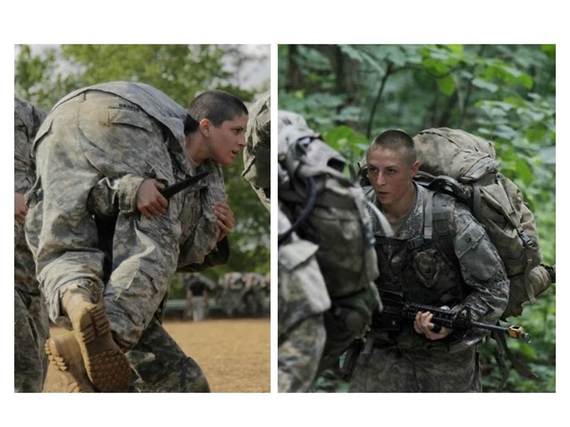 The U.S. Army's graduation last week of the first two women, Capt. Kristen Griest and 1st Lt. Shaye Haver, from its grueling Ranger training is just the latest milestone in the military's long arc toward gender integration. The women, both in their mid-20s and West Point graduates, met all the same standards as the 94 graduating men, including hand-to-hand combat, dropping from helicopters, swimming with heavy gear, and carrying comrades to safety.

Their feat is important, as the U.S. Army -- along with the Navy, Air Force, and Marines -- are on the verge of deciding whether to admit women to the many combat positions that still exclude them. The Secretary of Defense has given the branches until January 1, 2016 to drop any remaining gender exclusions or prove why they are unable to do so.

For their achievement, Griest and Haver have received a lot of attention and praise, notably, from their male comrades-in-training. But many remain skeptical of eliminating the gender exclusion for combat, seeing it as nothing more than an expensive, and potentially dangerous, gesture of political correctness. Others object more vehemently, arguing that women lack the strength and courage to fight as effectively as men, will never be accepted by men as leaders on the battlefield, and will instead become a liability as male comrades feel obliged to protect them "for reasons hard-wired into the male brain."

As usual, when women attempt to break into a formerly exclusive male domain, claims of "hard-wired" or fixed, genetic differences are dragged out to re-draw the definitive line between the sexes. One hundred years ago, as Americans were debating women's suffrage, an illustrious neurologist, Dr. Charles Dana, patiently explained to readers of the New York Times how certain inadequacies in women's brains impair their judgement and made it inadvisable to grant them the right to vote.

Of course, when it comes to physical attributes, there is no debate that men are taller, stronger and faster than women, on average. Nonetheless, there are obviously some women (like Griest and Haver) who are much stronger than the typical man, and there are certain physical abilities, like shooting accuracy, ultra-distance running and endurance swimming, in which women perform equally to or better than men. As the ranks of elite female athletes continue to grow and women increasingly take up fiercer sports like boxing, mixed martial arts and full-contact football, the number who are capable of completing Army Ranger training is sure to increase. So even though Griest and Haver were the only two successful of 19 women who began Ranger training (compared to the men's graduation rate of about one out of four), this rate is likely to increase as the pipeline of qualified women widens.

But there's more to completing a challenge like Ranger training than physical prowess. Obviously, it requires grit, or the passion and stamina to stick with long-term goals in the face of great struggle and set-backs. According to research by Angela Duckworth, the University of Pennsylvania psychologist who first defined and established quantitative measures of grit, this trait is more important than physical or intellectual talent to success in life, work -- and, no doubt -- combat. Importantly, measures of grit do not differ between males and females.

Grit does need to be cultivated, however, and the best way to do this is through challenge and practice. No one is born capable of leading a combat patrol or marching a dozen miles with a 75-pound backpack, no matter how much testosterone is circulating in their veins. Such skills must be learned, and for women, the opportunity to finally train with men is going to expand their capabilities far faster than in earlier eras. Just imagine what would happen if a lot more girls also grew up competing with boys in sports, as some are advocating as a way of more fully developing female athletic talent.

Gender integration is not only good for female soldiers. It is also good for male soldiers, if it means that the most dedicated, capable individuals are joining their units and further, if it increases men's respect for women. Unit cohesion did not suffer when the troops were integrated by race, nor will it suffer when integrated by gender, if soldiers are as professional as we expect them to be.

Noting that women already serve in combat in other nations, such as Israel, one army veteran wrote this week: "In my own experience as an Infantry soldier with two combat tours under my belt, I would have absolutely preferred to work alongside motivated, well-trained female soldiers than unmotivated, incompetent male soldiers. Tenacity, loyalty and competence aren't traits distributed according to gender, and anyone with the ability and drive to serve their country in combat should be allowed to do so."