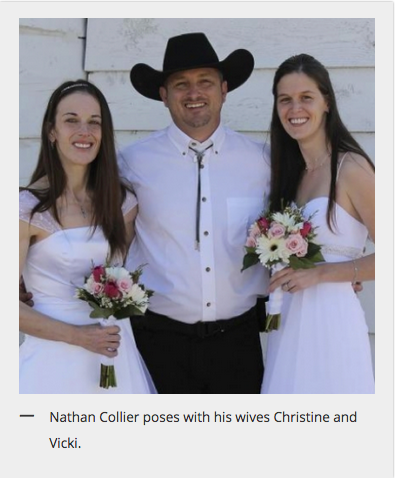 I just can't take it. You probably can't either. You've heard this story: gay marriage becomes the law of the land in the U.S., we all rejoice, and of course we now have Montana jackass Nathan Collier storming the Yellowstone County Courthouse for a second marriage license so that he may become a legal bigamist, crediting Chief Justice John Roberts' dissent in Obergefell v. Hodges as opening the door to the possibility of this marital windfall. Well, give the man some Golden Grizzly Ale and a dozen Rocky Mountain oysters! And he's not alone--others are queued up behind him, sights set on the Supreme Court, excited to increase the number of sammiches and sexytimes coming their way.

It's time for your daily dose of WTF. Why, why, why is it always one disgusting douchebag attempting to surround himself with an orbiting collection of female satellites? And before you lecture me that women have agency and ergo cannot be "hoarded," I know that, but the truth is that there are plenty of women who've grown up with fundamentalist religion brainwashing them to be subservient to men, and plenty of men happy to exploit that very situation.

It's even part of pop culture. TLC gives us five seasons, soon to be six, of Sister Wives, and I am screaming at the TV as I scroll past it, "Where are the Brother Husbands?! Gimme Brother Husbands!" What? Nobody wants to see that? You mean, no men want to make that show. I'd watch it! No I wouldn't. Just kidding. But the idea is no more preposterous than the one going into its sixth season, dang.

Our culture is in free fall. Just tie me to a tree and let passers-by shoot me with arrows.

Thanks for letting me vent. I am pulling myself together. Let's consider the issue intellectually. First of all, a little terminology lesson. Polygamy is a genderless catch-all word for something that is actually quite gendered. The word for men who have multiple wives is polygyny, and the word for women who have multiple husbands is u̶n̶i̶c̶o̶r̶n̶ polyandry.

Polyamory seems less unidirectional and to exist in all kinds of variations, but when it comes to polygamous legal marriage, not so much. To give you an idea of how rare it is for a woman to round up a gaggle of willing grooms who will fawn all over her and provide her with round-the-clock stud service as a team, we can look at this cool research called the Ethnographic Atlas. It was published by George P. Murdock in 29 installments from 1962 to 1980. As of the last edition in 1980, there were 1,231 societies listed--past and contemporary--from all five inhabited continents. Murdock compiled all kinds of descriptive information on those societies, systematically coding and organizing multitudinous pieces of information for the purpose of comparative research.

Polygamy was one of the areas Murdock documented. Maybe pour yourself a shot of whiskey as I lay some data on you. Of the 1,231 societies listed in the 1980 Ethnographic Atlas, 186 were monogamous; 453 had occasional polygyny; 588 had more frequent polygyny; and 4 had polyandry. FOUR! Shall we now discuss patriarchy? Let's!

Plural marriage of the polygynous variety is patriarchy on crack. It is obviously associated with status and hierarchies where, as with elephant seals on the beaches of the Aleutian Islands, males herd up females, leaving lower-status males without mates and more prone to frustration and violence--violence which is naturally directed at females in the form of beatings, rapes, and many other atrocities. You see this in modern-day societies where polygyny flourishes, and it's not much different than how things play out in countries that favor boys and, due to femicide, now have an enormous gender imbalance that leaves too many men without options for sex, marriage and raising a family.

Monogamy is more common today than it used to be because it is widely recognized that with monogamy comes greater gender equality. Notice I did not say it comes with gender equality--I said greater gender equality. Even in societies that outlaw polygamy, patriarchy still maintains a stranglehold on women, but if you look at countries with rampant polygyny, such as Iraq and Nigeria, you see even more illiberal, unequal, unhealthy societies with extremely high rates of very violent abuse of women.

Polygyny is bad for women for other reasons, too. It places them in competition with the other wives, to whom they do not always feel sisterly, and reduces their worth to how favored they are by the man. Suddenly it's all about who'll be the most adventurous in bed or who makes the best hoagies.

I'm not saying, nor do I think, that if the Supreme Court were to make polygamy legal, America would suddenly become like Saudi Arabia. It would probably just be fringe outliers (and the followers of some pro-polygamy religions) who start stockpiling marriage licenses. But what do I know? Perhaps we'd sink like a stone to the lowest patriarchal denominator. What is so vomitocious is that life would imitate art. There would be very few polyandrous marriages, and most would be polygynous, just like almost every example we read about in books of fiction or in the actual news.

I'm looking at you, Nathan Collier. You, sir, make me sick. F*** you. And the horse you rode in on. And your stupid black cowboy hat. And your little black string tie.