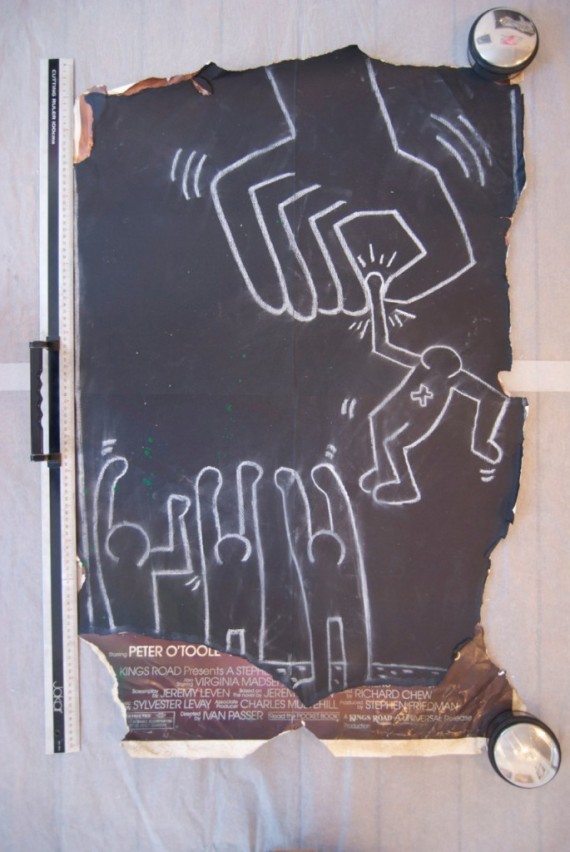 If you happen upon a mysterious trove of heretofore unknown Keith Haring works in an online sale, think twice. Maybe. According to several tips to artnet News, a rash of works by Haring and other ’80s stars are being peddled far and wide, and are plaguing the online art market.

Dubious eBay jackpot Exhibit A: Charles Uzzell Edwards, owner of London’s Pure Evil Gallery, says about eight weeks ago he happened upon a substantial inventory of little-known ’80s Pop art ephemera on eBay, being sold by a Swedish seller. The online find included subway drawings attributed to Haring as well as Polaroids said to be by Warhol. He bought some pieces online, and then negotiated to buy a larger group of works from the Swede, who sells under the name bobinga33 and eventually identified himself to Edwards as Patrick Maske. Maske claims that the works belonged to his late father. (In an email to Edwards, read by artnet News, Maske described him as “a private and quiet collector” active in the 1980s and ’90s, adding, “I think he had contacts or someone helping him to take down pictures in the subway in New York in the 1980s.”)

Edwards says upon close examination that the Haring chalk drawings are likely artfully constructed fakes. Though many details are accurate, including references to specific ads that might have been in the subway at the time Haring was working, Edwards says that the paper appears to have been deliberately aged, of the wrong type, and its back shows no evidence of ever being stuck to a wall. “We have taken them off the market,” said Edwards yesterday. “I had a few conversations in the past 48 hours that convinced me they were all fake.” 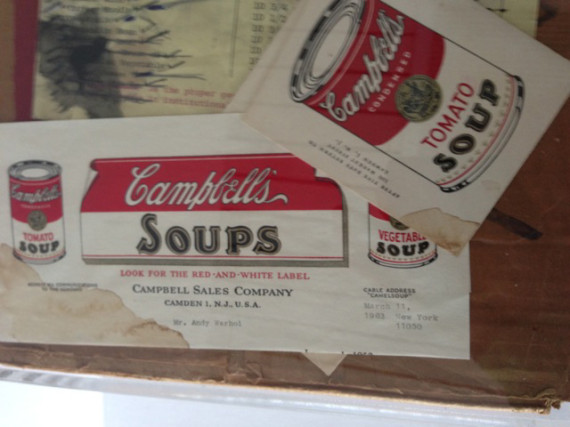 When it comes to another item Edwards purchased from Maske, a shipping box from the Campbell’s Soup Company supposedly used as reference material by Warhol, the fakery is even more pronounced, even humorous (especially since it is a box of soup cans). A Warhol expert (who did not wish to be identified for this story) told Edwards that a document accompanying the box to support proof of authenticity is actually a facsimile of a unique original in the collection of the Warhol museum in Pittsburgh. More damningly, says the expert, there is a questionable ZIP code on a label on the box. The ZIP code 11050 appears beneath the date “March 11, 1962 New York”; however, the US Postal Service began implementing ZIP codes in 1963. More, a 11050 ZIP code would not have corresponded to the Campbell’s address, since the company was based in New Jersey and the ZIP code belongs to Port Washington, New York. This expert suggested that a forger may have done a Google search and erroneously provided the ZIP code for “Campbell’s Carpet Service,” which is in Port Washington.

Other Online Auctions Affected Other dealers confirm rumors of a spreading plague of fake Harings. Richard Tokatly, of London’s Artificial Gallery, said, “I can confirm I have been contacted on numerous occasions by a very enthusiastic seller of a treasure chest of purported works by Keith Haring, all of which we have dismissed as dubious and in our opinion highly unlikely as having been executed by the artist, the provenance being sketchy at best.”

Tokatly said the emails he has received are from one Robert Hilmersson, also from Sweden, “offering various suspect works by Haring and Warhol (including Haring subway drawings on metal signage and black paper, and so-called Warhol Polaroids with suspect Estate stamps verso). I understand the same source has contacted other galleries under the name ‘Patrick Maske.’”

Four works, including a a subway sign and three subway drawings attributed to Haring, were until recently part of a Paddle8 auction as part of a Bloomsbury Auctions Modern & Contemporary art sale. After artnet News’s initial inquiry about them, they were all removed from the Paddle8 site. Thomas Galbraith of Paddle8 said “as a company we always err on the side of caution and continue to have very high expectations when it comes to due diligence. When we were notified of a potential problem with these lots, they were immediately removed while we initiated an investigation. This is in no way intended as an implication of any wrong doing on Bloomsbury’s part, rather it comes from a desire for an abundance of caution.” At press time, Bloomsbury was still offering the works. When contacted, a spokeswoman said the removal from Paddle8 was not something they had instructed or were aware of.

Problematic provenance Sources say the Haring committee never ruled on the authenticity of the subway drawings in the first place, since the artist himself did not consider them works of art. The authentication committees for both artists, Warhol and Haring, were disbanded in recent years in the wake of costly lawsuits over their verdicts. Joseph Peschl of London’s Globe Gallery, who describes himself as a long-time collector of Haring, said he thought the dissolution of the authentication board might have given a green light to the unscrupulous.

“These works, purportedly from a private collection in Sweden, have conveniently surfaced after the dissolution of the authentication committee of the Haring Foundation,” Peschl wrote. “One must ask if the collection had been in existence for a number of years why the owner would not have attempted to have at least some of the works authenticated prior to the disbanding of the authentication committee at the Foundation in September 2012.”

Three of the four works that were removed from the Paddle8 sale had an accompanying letter confirming authenticity by Angel Ortiz, a former friend of Haring and active graffiti artist who goes by the street name la2. Who, then, brought these works to Ortiz? He says he was contacted by Robert Hilmersson, the same individual mentioned by Tokatly as shopping around dubious Harings, who sent digital pictures of the work and that he signed papers certifying they are authentic. But, Ortiz accepts no responsibility, “If people want to buy them, it’s up to them.”

The mystery remains What ultimately, to make of these confusing cases, besides caveat emptor? Is there a link between the two Swedish individuals behind the Pure Evil and Paddle8 works, respectively? This remains unclear. Some dealers suggest that a single seller may be operating under multiple aliases. When contacted by artnet News, Hilmersson denied selling any of these works, saying via email: “I am not sure of why you are approaching me with these questions.”

Maske sought to downplay the dispute with Pure Evil over the Campbell’s Soup box: “The problem with the box was solved for about a month ago,” Maske wrote in an email to artnet News. “We both Agreed on the matter. I just mailed a letter to Pure Evil and explained that I’m more than willing to pay back his money, Which I’ve made clear to him before.” He continued: “I am not an expert in this area… I’ve been selling items on a site called ebay and tried to be as clear as possible with these objects. Whenever I’ve listed something on Ebay, I’ve written that I have no purchase ticket or any other paperwork to accompany the item. That’s why the listings are starting with 1 dollar. It’s the only thing I posted and no certificate is included with the auction, and that the object is sold under the mannerism of the artist ‘as is’. Ebay has some rules that you must be able to verify the authenticity and I have not been able to give to the buyer.”

Edwards, however, isn’t having any of it. “We are waiting for him to return ALL the money by the end of business tomorrow, or we are going to take the matter to The Scotland Yard Art and Antiquities department,” he wrote when asked about Maske’s statement. “I feel he KNEW these were all fakes.. The polaroid images of Haring were taken from images found on Google. Surely his mysterious father couldn’t have had access to Google image search in the ’80s and ’90s. I have also been contacted by another buyer who had suspicions about the Haring polaroids and the haring chalk drawings… we compared notes about those and both confirmed that they were images from Google… ‘HARING SUBWAY PAINTING’ showed for example this image. It appeared in one of the polaroids, as did a LOT of the other ones.”

More than 50 works remain on Maske’s eBay page, all marked “RARE,” some with cryptic entries listing multiple artists’ name. Several are listed as already sold, such as “RARE, Keith Haring Subway porcelain = Andy warhol Banksy sign,” which appears to have gone for $7,877, and “Andy Warhol Drawing in pencil with red paint over it/screen print,” sold on June 1 for $1,470. 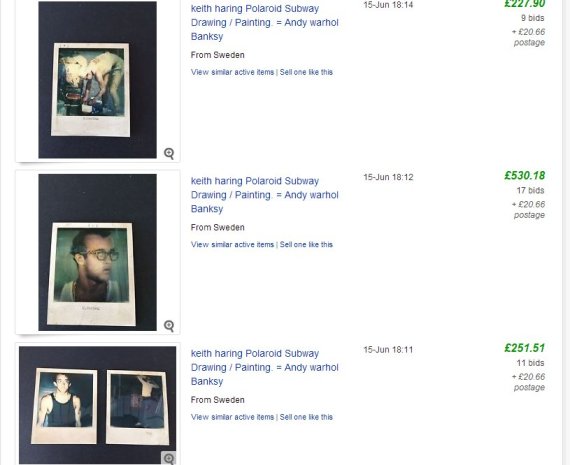 Here Are 8 Ways To Reimagine The Iconic Banana
More:
On Our Radarforgeryandy warholKeith Haringartnet
Trending