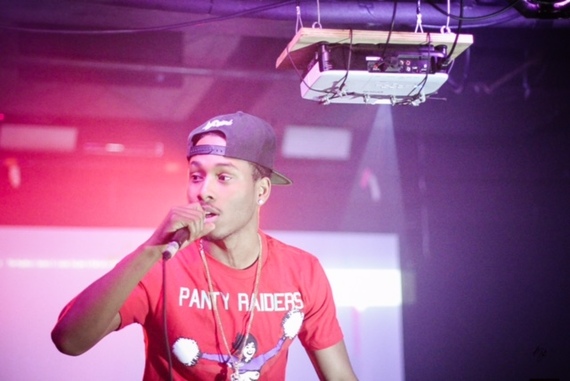 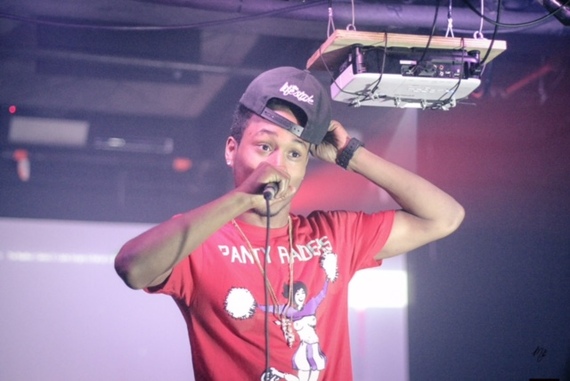 Do you remember where you were in the fall of 2002? How about this, do you remember the movie "Brown Sugar" with Sanaa Lathan and Taye Diggs? What about that famous line "When did you fall in love with hip hop?" Well for Harlem born and bred rapper, CashFlow he's always know and he's always been down for hip-hop. When I think about music, whether it is rap, R&B, jazz, classic, house (that's the Chicago in me) or even country, each of these genres of music gives me something different. Sometimes it's fresh and unique and after listening to CashFlow that's exactly what I get. He's got a fresh and unique flow and when he pairs that with some fresh beats you can't help but bob your head to it.

I caught up with the young Harlem rapper moments before he was set to perform at Rap Fest. This event brings rappers from all over the Northeast to an underground club in the TriBeCa section of Manhattan. Recently, CashFlow the MC has garnered a lot of attention for his single Ladies vs Thots, where he artistically over a series of bars lays out the difference between a woman who takes care of her business and another woman who depends on others to handle it for her. The video along over multiple social media platforms has already been viewed more than four million views. After listening to a couple of his other songs on his growing and popular YouTube channel it was evident that he clearly has a voice. Nearly all of his freestyle videos are shot with him sitting in the driver seat of his car, no props, no gimmicks, he is truly representing his authentic self.

Naturally, I had to talk to the young artist who has worked with everyone from Miguel, French Montana, Ciara, Juelz Santana to Teyana Taylor. He's even shared the mic with Harlem born and raised rapper Cam'ron. It goes without saying that CashFlow is in great company when it comes to rappers that call Harlem home.

KM: When did you fall in love with hip-hop?

CashFlow: Going back to Harlem, it's the home of the slick talk, when I was little I was listening to a Big L freestyle and he was talking about and he was talking super slick on the joint. I'm from the part of Harlem right across the street from the Rucker, so all the best rappers were pulling up in their whips and it was the lifestyle too. I just wanted the whole thing.

KM: I've listening to some of your freestyle flows and it appears that you rap a lot about everyday things. Are you rapping about what you actually see everyday?

CashFlow: It's very genuine, it's organic, I'm not just doing it because I think people want to hear it, that's just how I feel and there's enough music that's about nothing so I wanted to give people some real subject matters, so real content.

CashFlow is definitely in the new class of artist like Kendrick Lamar, J. Cole, and Big Sean that offers real life experiences about their respective hoods and communities. Not since the golden days of Biggie, Pac, and NWA has a rapper lived the street and included it in music to deliver to the masses. The young rapper CashFlow is definitely carving out a lane solely for him. He is currently working on projects with The Game and of course Harlem's own Cam'ron. In the meantime however you can listen up on CashFlow by taking an ear to his mixtape "In the Car Freestyles." What stands out about the rapper is his willingness to help others from the same hoods he grew up in live out their dreams.

KM: Where do you see yourself?

CashFlow: I see myself right now creating and then in the next few years helping someone else create. I think a lot of people that's in power are using that power the wrong way. So I want the power that comes with this life so that I can use it in the right way.

CashFlow is also working on his first EP that's slated for a release later in the year. He's visible across all social media platforms and his parting words for music heads everywhere is he's ready to bring hip-hop back to Harlem.