Carmen Vargas-Rosa, a lifelong member of the Christian evangelical church at the center of the Harlem building collapse, said church members are still trying to find at least two tenants who have been missing since this morning's disaster.

There are six apartments above the church housing about 20 people, she said, all of whom were members of the Spanish Christian Church. All morning, church members have been frantically working to account for everyone in the building.

Some thought to be missing turned out to be at work and school, and other tenants were confirmed to be at Mt. Sinai hospital and other area hospitals, Vargas-Rosa said.

"We know who was safe, but there are those who we don't know anything about," she said. 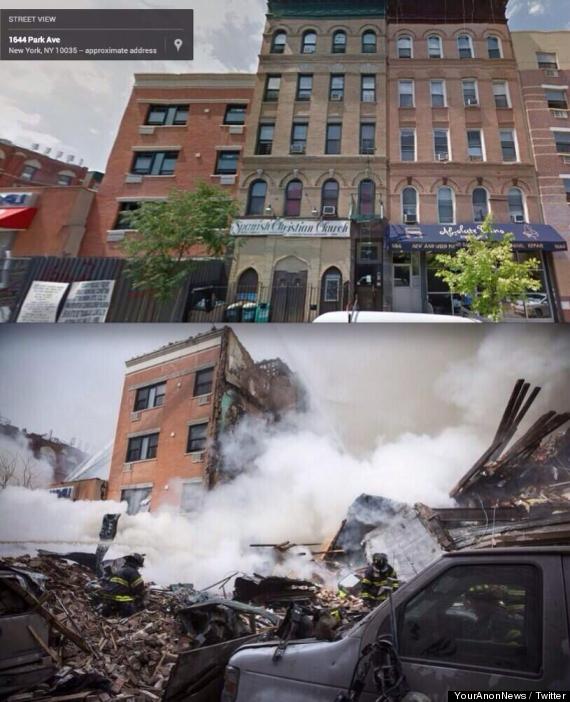 The church at 1644 Park Ave before and after the horrific explosion.

She said it was unclear whether the two reported dead were from the church building or the neighboring structure.

Vargas-Rosa said she smelled gas last night when she was in the neighborhood visiting family members. She said she thought the smell was coming from the deli at the corner of 116th and Park Ave., and told the owners about it.

The Spanish Christian Church has a long history in Harlem, just celebrating its 80th anniversary last fall. There are about 60 total church members.

The registered head officers for the church are Rev. Santos Mercado and Rev. Thomas Perez, according to Village Voice.

We miss you Spanish christian church. Been there since I was three. I hope the people that where there will be found. #EastHarlemExplosion

My condolences to the Pastors, Elders and people of Spanish Christian Church in NYC today. There was a... http://t.co/XpiHCK8bft

If you or anyone you know has been affected by the #EastHarlemExplosion please let me know. We would love to help. Please RT