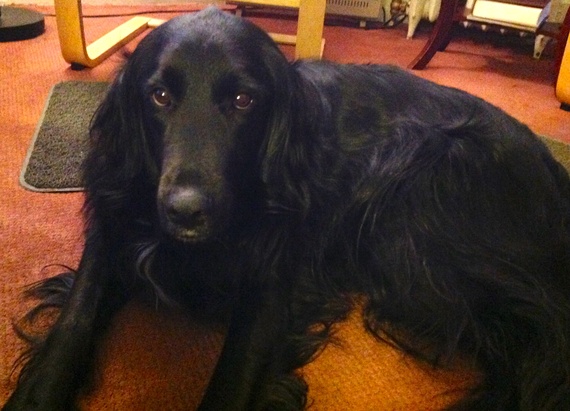 Harley, my therapist's 85-pound flat-coated retriever, leans his big black back on top of my feet and snores softly.

I'm in therapy to cope with post-traumatic stress disorder (PTSD), which I have as a result of childhood sexual abuse. Harley is not a certified therapy dog -- he is simply my therapist's dog -- but he's been sitting in on my sessions for almost two years now. His presence is a comfort. But it wasn't always.

When I first met Harley, his 40-something-pound puppy self excitedly jumped to say hello. My therapist held him back but his mouth and paws were already on me, everywhere. My body froze and my mind raced. I had this flashback:

I'm nine years old, asking my father for a puppy. My father tells me we can't have one because he's allergic. "But I want a dog," I repeat.

"I'll be your dog," my father offers. He leads me into the living room, where we get down on all fours and play a game called Doggy. Our tongues hang out of our mouths. We pant and sniff, and wag our tails. We're having fun. Suddenly, my father pushes me over and gets down on top of me. My world gets dark and closes in...

When I first met Harley, I didn't see a dog; I saw my father.

For months, I was afraid of him. My whole body tensed at the sight of his tongue, the jangle of his collar, the sound of his breath.

Although I understood my fear was irrational, I asked my therapist if he'd leave Harley at home. He said he would if necessary, but he thought it might be an opportunity for me to untangle my trauma from my current reality, to free myself from the hold of my past. He suggested I begin by visualizing two television screens: one that showed Harley doing whatever he was doing (which, after the first few minutes of my session, was usually sleeping), and the other that projected the play-by-play of my associated traumatic memory. In this way, I could begin to separate the bad from the good.

At first, such a mental exercise was difficult. But as the weeks progressed, I became more skilled. The more time I spent around Harley, the more I was triggered, and the more practice I had. As more abuse-related aspects and memories surfaced, I placed each one on a separate TV screen, lining them up within my inner eye.

"Use however many TV screens you need," said my therapist.

I had enough to fill a Best Buy.

As time went on, my mind grew stronger. The terrible grip my traumatic past had on my nervous system began to ease.

When I entered my therapist's office, Harley sat up politely -- no jumping. When I sat down, he walked towards me and I gave him a few pats on his back before he settled down to nap. When I reached to pet his head, he lifted his nose to look at me, upside down, with the most benevolent brown eyes I'd ever seen.

"Notice," my therapist said, "how those eyes are different than your abuser's."

I noticed. I focused. I breathed.

Sometimes, when I arrived for my session, Harley remained curled up on the floor, not moving a muscle, but for his brow.

"Hi Harley," I'd say, and his tail would start to wag. If I approached, if I bent down and pet him, he'd gently roll onto his back, revealing his most vulnerable self. When I rubbed his white tufted belly and chest, he made calm breathing sounds, in the spirit of a purring cat.

Sometimes, Harley hooked a paw around my ankle, sniffing my nail-polished toes. When I spoke of upsetting things, when I wept, sometimes he licked my forehead or placed his head in my lap: I'm here.

Frequently, he remained asleep, undisturbed by my talk of trauma. Sometimes he dreamed and yipped.

Once in a while, he opened his mouth, bared his teeth, and lightly grasped my arm or my hand.

"He's saying you're one of the pack," my therapist explained.

Now, Harley is leaning against my feet, his body long and still across the floor. My toes are tucked under his torso. His weight soothes me, grounds me.

According to the National Institute of Mental Health, "approximately 7.7 million American adults have post-traumatic stress disorder (PTSD), which frequently occurs after violent personal assaults such as rape, mugging, or domestic violence; terrorism; natural or human-caused disasters; and accidents."

How do we heal from trauma? By opening ourselves up, by doing the work, by believing we can.

There are times I have setbacks, when I experience PTSD's "double takes": there are moments when I look at this dog and, for a flash, I see my father. But when I reach for Harley, I know where I am, who this is.

Harley latches his front paw around my wrist, as if to help, to hold my hand. 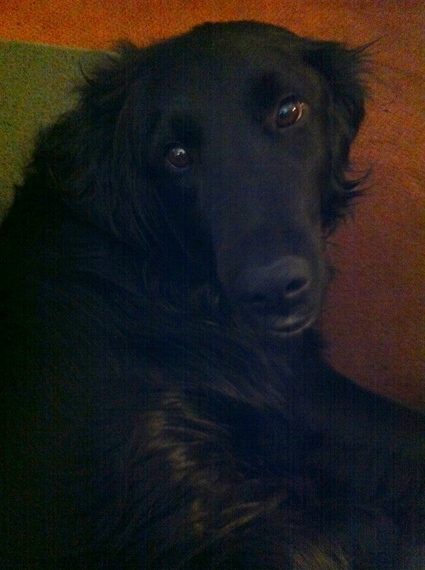 Tracy Strauss is seeking a publisher for her book, Notes on Proper Usage, a mother-daughter memoir about recovering from PTSD. Learn more at www.tracystrauss.com.