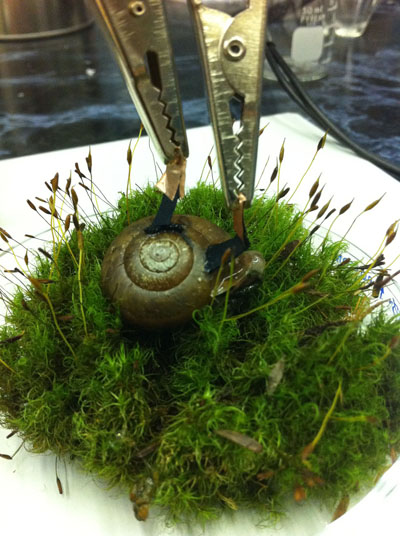 In April 2012 a slimy cyborg made its debut. Evgeny Katz of Clarkson University became the first person to implant a biofuel cell into a snail, creating a renewable energy source that runs on the creature's own glucose.

So far Dr. Katz managed to power a small battery, but the hope is that snails and other small creatures can carry remote sensors with applications for military recon or for environmental monitoring. The snail joined a beetle and cockroach that had previously become biofuel cell-bearers. Compatriot insects like cockroaches, horned beetles, and moths have been undergoing military training with the Defense Advanced Research Projects Agency, an arm of the Department of Defense that provides millions of dollars to equip bugs with tiny technological backpacks and implants.

They say the snail remains unharmed for the duration of the experiment. But does anybody care? As far as I can tell, there hasn't been any great public outcry over turning a gastropod into an unwilling power horse. This made me wonder whether snails and bugs, because they are small, slimy, or crunchy and reasonably repulsive to the general public (at least to people over age 10) are considered fair game, and why? What is our tolerance for using unappealing living creatures for science? Where do we draw the line?

Another curious energy-producing project raised a stink. In 2009 London-based interaction designers James Auger and Jimmy Loizeau, along with Dr. Alex Zivanovic of Bristol Robotics and the Ecobot II technology, created Carnivorous Domestic Entertainment Robots, five smart pieces of home furniture that are each equipped with a microbial fuel cell -- a sustainable device that converts chemical energy into electrical energy when bacteria are fed organic matter. Auger and Loizeau saw them as a spectator sport, something like a super-slow gladiatorial event or a live, homespun reality television show starring flies, moths, and mice as ill-fated participants and robots that do not fit our preconceived notion of a metal humanoid. These hybrids are quasi-living creatures. They need to be fed.

The "Flypaper Robotic Clock" feeds on flies and moths. It's an elegant wall-mounted bug catcher comprised of a long, sticky roller that attracts flying creatures and then facilitates their transport to the microbial fuel cell. The energy produced by bacteria powers the roller and a digital clock.

The "Mouse Trap Coffee-table Robot" lures mice down two fatal paths into the microbial fuel cell. There's a mechanized iris with a motion sensor that plunges the mouse into the table, and a leg that lures the mouse up into the tabletop. The demise of the mouse means a fiesta for microbes, which provide the power to run the motion sensor, the motor of the iris, and a LED graphic display on the front of the table.

The "Lampshade Robot" is a dark orb with holes leaking bright LED light. Insects dive-bomb into the light but cannot escape. They end up falling into the microbial fuel cell below and power internal LED's that attract more bugs.

Articles and blog posts about this project express repulsion at the idea of flesh-eating robots. Robert Krulwich of NPR writes in "Man-eating Furniture":

You're not going to like this. I didn't. Nobody I've shown it to has. But the designers who thought it up, James Auger and Jimmy Loizeau, are provocateurs, so they don't mind if you hate what they've done.

I worry a little that Auger, Loizeau, the engineers at Bristol Robotics and robot-makers generally get so excited by the daring novelty of their designs that they fail to notice that they've crossed a line.

"We want robots to be able to get their own energy from the environment," says Professor Melhuish [of Bristol Robotics]. Fair enough. But giving robots a taste for flesh seems just a touch wrong-headed. I mean quickly ask yourself what could possibly go wrong with this scenario.

So why do people find this project so objectionable? Is it the willful hybridization? Should we just let furniture be furniture? Or is it the idea of turning rodent extermination into so-called "entertainment"? Are the designers pissing off the public, using language to obfuscate what we already do to rodents? Are flypaper and mousetraps a more demure method of slaughter because they remain hidden in the pantry or behind the oven? Here are James Auger's thoughts on the reaction, from NTDTV:

If you have a mouse in the home, or if you've got a fly problem, it's no problem at all to get UV fly killer or fly paper, or to get the rodent control people to lay poison, so long as they put that animal that you've just killed in the bin afterwards. If you use that animal, that creature, to generate electricity, then people find it very problematic. And we've had quite a negative response. There are some amazing debates taking place over whether it's appropriate use of natural material or not.

Like it or not, there's momentum for microbial fuel cells and energy generation using organic matter -- both living and dead. And if you ever try to pass secrets to the enemy, steer clear of the slime trail.