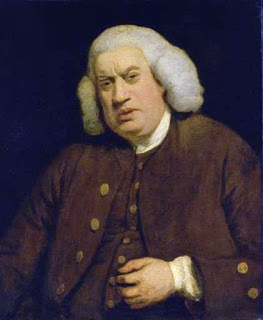 Leopold Bloom is one of the most famous characters in literature, a modern day Odysseus, wandering through Dublin and living with a case of impotence in the light of the death of his son, Rudy. Harold Bloom on the other hand is hardly a work of fiction though he might very well have been a character dreamt up by a novelist like George Eliot whose famous intellectual was Casaubon. Bloom bears some resemblance to Dr. Johnson due to his several chins and his extraordinary knowledge. However, Harold Bloom is more of a critic than a lexicographer and as of yet has no Boswell, documenting his life and appetites. Surely it's about time someone address the life of Harold Bloom and his legendary photographic memory. Bloom like another Bloom by the name of Allan who taught at the University of Chicago is a great advocate of the canon, much of which ostensibly lies not only at his fingertips but on the tip of his tongue. A potential Boswell could do for Bloom what Joyce did for his fictional character, charting the great literary critic's wanderings, which, however, might be more around imaginations than cities. Poldy was the nickname Joyce gave to his character. Compulsion was Meyer Levin's' fictionalized treatment of Leopold and Loeb. Harold and Maude was a romantic comedy. But how about a movie about the two Blooms called Harold and Leopold? It would hit moviegoers like the canon.