By Brian Grow and Joshua Schneyer

ATLANTA/NEW YORK (Reuters) - Continental Resources chief executive Harold Hamm, one of America's wealthiest and most influential businessmen, is embroiled in a contentious divorce that could lead to a record financial settlement and threaten his control of America's fastest-growing oil company.

Documents in the case are sealed. But in a March 7, 2013 filing obtained by Reuters, Sue Ann Hamm alleges that Harold "was having an affair" that she discovered in 2010, prompting her to later file for divorce.

Harold Hamm, 67, is a leading force behind the U.S. oil boom and served as the senior energy adviser to Republican presidential candidate Mitt Romney's campaign. Time magazine named him one of the most influential people in the world, and Forbes listed him last year among the 50 richest Americans. Ranked No. 35, Hamm is worth $11.3 billion, the magazine estimated.

His estranged wife, Sue Ann Hamm, 56, has held key posts at Continental. She has led oil-industry trade groups in Oklahoma, testified to Congress on behalf of Continental and created Continental's oil and gas marketing units. She is no longer with the company, her lawyer said.

The Hamms were married in April 1988 and have two adult children, Jane and Hilary. Harold Hamm has three children from a prior marriage that ended in divorce in 1987.

Whether the Hamms signed a prenuptial agreement is unclear. Legal analysts who reviewed court filings said that without one, the case could lead to a record-breaking financial settlement - one that could exceed the $1.7 billion paid by News Corp. founder and chairman Rupert Murdoch to ex-wife Anna in 1999. One outcome could be a split of "marital property" that may include dividing Harold Hamm's controlling 68 percent stake in Continental, currently worth $11.2 billion.

"I don't know of anything that's ever been this big," said Barbara Atwood, professor emeritus of family law at the University of Arizona. "There's just so much money involved."

Continental was subpoenaed in the case last summer, and it was ordered by the Oklahoma court to hand over documents late last year. Four other companies controlled by Hamm also were subpoenaed.

A review of Continental's Securities and Exchange Commission filings and company statements shows no mention of the divorce proceedings. Although corporate governance scholars said Continental had no legal obligation to disclose the Hamms' divorce proceedings to shareholders, "It's a lawsuit that involves a potential impact on the controlling shareholder," said Charles Elson, director of The Weinberg Center for Corporate Governance at the University of Delaware. "Certainly, it would be relevant to an investor if there is going to be or could be a shift in control."

After receiving inquiries from Reuters, Continental put out a news release acknowledging the divorce case. The fight, the company said, "is not anticipated to have any impact or effect on the company's business or operations."

An attorney for Sue Ann Hamm declined to comment, citing a confidentiality agreement governing the case.

Hamm, the 13th child of Oklahoma sharecroppers, started his career at age 20, scrubbing scum out of oil barrels. A few years later, he drilled a 75-barrel-a-day gusher in his home state, helping pay for university classes in geology. He founded Continental in 1967, two decades before he and the former Sue Ann Arnall were married. She is an economist and a lawyer.

Today, the Bakken yields nearly 700,000 barrels a day, roughly 10 percent of American output. Continental controls more than 1 million acres in the formation, which stretches from North Dakota to Montana. The firm also owns oil and gas rights in several other states, including Oklahoma.

Continental has said the entire Bakken field - being developed by several companies - may contain 24 billion barrels of oil. That would be enough to meet U.S. oil demand for more than three years. Drilling by Continental alone added 649 million barrels to the company's proved oil reserves between 2008 and 2012.

The firm says it controls drilling leases to more oil-rich Bakken acres than any other company, helping to make Hamm the largest oil baron in the United States.

Hamm directly controls 126.3 million shares, or 68 percent, of Oklahoma City-based Continental and more through family trusts. Those shares alone are worth at least $11.2 billion. Continental shares have risen 21 percent this year and closed on March 20 at $89.15, down 0.6 percent.

But his stake in Continental could change significantly as a result of a divorce settlement. The firm's massive growth occurred during the marriage. Its share price has surged nearly 500 percent in the five years since an initial public offering in 2007.

Under Oklahoma family law, wealth accrued through the efforts of either spouse during a marriage would typically be subject to "equitable distribution" between the parties.

"A court in Oklahoma may look closely at what each party has contributed," said legal specialist Atwood. "But it sounds to me like both spouses here were working hard in the business."

"Where there are concerns about company control in a settlement, a spouse would usually get paid the value of the shares," she said. "This is going to be really interesting."

Court records show that Sue Ann Hamm petitioned for divorce in May 2012. But earlier Oklahoma court records suggest the Hamms' relationship has been rocky.

In 1998, Harold Hamm filed for divorce and demanded that Sue Ann undergo a psychological evaluation. He later withdrew the divorce petition and the case file was ordered destroyed this year, on February 13, according to Oklahoma court records. What prompted the destruction of the file is unclear. In 2005, Sue Ann Hamm subsequently filed for divorce; that case also was dropped.

Her 2005 divorce filing is now a key issue in the Hamms' divorce battle, according to a court document reviewed by Reuters. Indeed, it could play a pivotal role in determining how property - including interest in Continental - will be divided, legal analysts said.

According to Harold Hamm, the couple "actually separated in the fall of 2005 and have lived separate lives ever since," the court document says.

But Sue Ann Hamm's attorneys counter that the Hamms "continued to reside together (although they do own four homes), travel together, attend public functions together, raise their children together, file joint tax returns, and work together."

In May 2012, for instance, Harold and Sue Ann Hamm jointly hosted a fundraiser for Republican presidential candidate Romney at their $3 million mansion in Nichols Hills, Oklahoma, according to photos and media reports. The event raised more than $2 million for the Romney campaign.

Last September, Reuters reported that Harold Hamm had made political contributions that exceeded federal legal limits by as much as 41 percent during the 2011-2012 election period. Continental said at the time that the donations were made from an account held jointly by Harold and Sue Ann Hamm and were intended to be split between Hamm and his wife, which would have kept the donations within legal limits.

In 2011, Harold and Sue Ann Hamm also jointly gave $20 million to a diabetes center at the University of Oklahoma named for Harold Hamm, who has Type II diabetes. The same year, the couple signed up for Warren Buffett and Bill Gates' Giving Pledge initiative, indicating their intention to dedicate most of their wealth to philanthropy.

In a court filing two weeks ago, Sue Ann Hamm's attorneys say the Hamms agreed "to engage in marriage counseling sessions in an effort to save their marriage" in November 2010, after Sue Ann Hamm concluded that her husband had been unfaithful.

Whether the Hamms separated in 2005 or more recently is crucial as the court determines how Harold Hamm's assets will be divided, legal analysts said. Under Oklahoma family law, the increase in the value of an asset during marriage is considered part of the total pool of "marital property."

"In general, if you own property prior to the marriage and you bring it to the marriage, it is separate," said Marianne Blair, a professor of family law at the University of Tulsa. "But that separate property can increase in value. To the extent the increase was due to marital efforts or marital funds," it can be divided by the court.

Hamm divorced his first wife, Judith Ann, in 1987, according to Oklahoma court records. A document filed by Sue Ann Hamm's attorneys in the current case shows they received access to marital records in the prior divorce in March.

Attorneys for both Hamms will present evidence about when the couple separated and the resulting "date of valuation of (the) business" on May 20, according to the court docket.

What's decided could help determine whether their divorce settlement rivals the largest reported divorce settlement to date - the $1.7 billion paid by Murdoch to his ex-wife Anna in 1999. That settlement, in California, directly affected shareholders of News Corp. because it awarded Murdoch's three eldest children stakes in the voting shares of the company. Reports of the Murdoch divorce sent News Corp. shares lower.

Daniel Jaffe, a family law attorney in Beverly Hills, California who represented Anna Murdoch, declined to discuss the Murdoch case. But after reviewing the court docket and document obtained by Reuters in the Hamm case, he said Sue Ann Hamm's decades of work for Continental was unique compared with most divorce cases.

"She has a leg up because she worked for the company and she can claim that a portion of her efforts went into making the company what it is today," Jaffe said. "She was married to him when the value of the company went up. She has got to be looking for a couple of billion dollars." 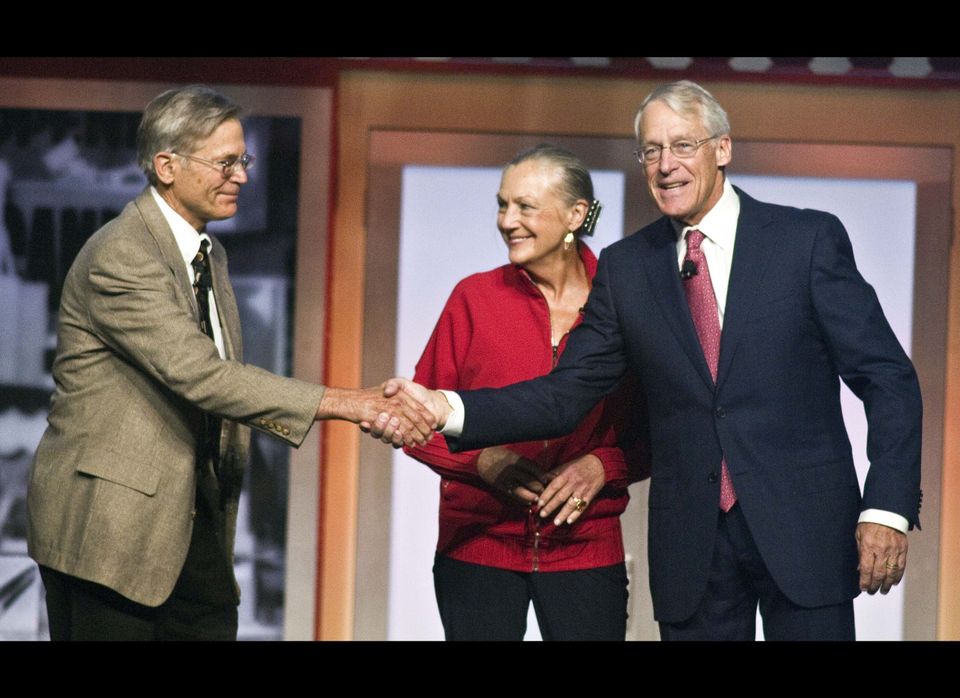