For over two decades, Harold McGee's On Food and Cooking: The Science and Lore of the Kitchen has been an authoritative reference for amateur and professional cooks alike on virtually any ingredient and occurrence in food and cooking. 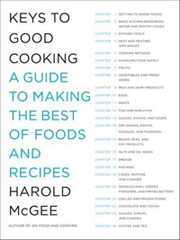 In his 'Curious Cook' column in the New York Times, McGee has continued to dispense his expertise on everything from why cilantro tastes like toothpaste to some, to what onions and garlic have in common with gunpowder.

McGee has now released a new volume, Keys to Good Cooking: A Guide to Making the Best of Foods and Recipes, that looks to have the same staying power in the world's kitchens as On Food and Cooking. Keys to Good Cooking distills McGee's decades of food science findings into a carefully organized reference book that home cooks of any level can use to make better food.

McGee dispels many popularly -- but falsely -- held notions about food and cooking in the new book, so we asked him to share some of those with HuffPost Food readers. Below are 15 kitchen myths from Harold McGee, and their corresponding truths.