At least six people have reportedly been killed and more than 100 others injured following an apparent tornado that tore through the southeastern Illinois town of Harrisburg.

The Illinois Emergency Management Agency earlier told the Associated Press that 10 were dead, but an agency spokeswoman later said that was incorrect.

As residents of the small town, which is located about 100 miles southeast of St. Louis, Mo., try to salvage what is left of their belongings, at least 100 others are being treated for injuries at area hospitals, the St. Louis Post-Dispatch reports. A hospital employee told the paper there are "crushed houses" throughout the area.

Emergency crews responded to the area just before 5 a.m. Wednesday, according to the AP. Severe storms have also been blamed for widespread damage and injuries across the Midwest. In southwest Missouri, three people were reportedly killed in overnight storms and the tourist town of Branson, Mo. was heavily damaged.

In a Wednesday morning statement, Illinois Governor Pat Quinn said he plans to visit Harrisburg, and said the state was prepared to offer financial assistance to those affected by the storm.

“At least six people have lost their lives in the wake of these storms, and our hearts go out to their families and the many others who were injured or suffered a devastating loss,” Quinn said in a statement. “The state of Illinois is committed to doing everything possible to help these communities respond and recover from this disaster.”

The Saline County sheriff's office told the Post-Dispatch that up to 300 homes and 35 businesses were destroyed in the storm.

The Harrisburg Medical Center was reportedly damages by the storm, but remained open to treat the injured. Vince Ashley, CEO of the small hospital, told the AP that no one was injured at the medical center -- but things were chaotic.

“It's been quite a rush. They're still coming in, but we've been able to keep up with the flow of injured coming in,” Ashley said about three hours after the storm passed. “Helicopters have been coming in and out here all morning.”

See photos of Harrisburg after the storm here:

CORRECTION: This story previously stated that Harrisburg was in southwest Illinois. It is actually in southeast Illinois and has been updated to reflect that fact. 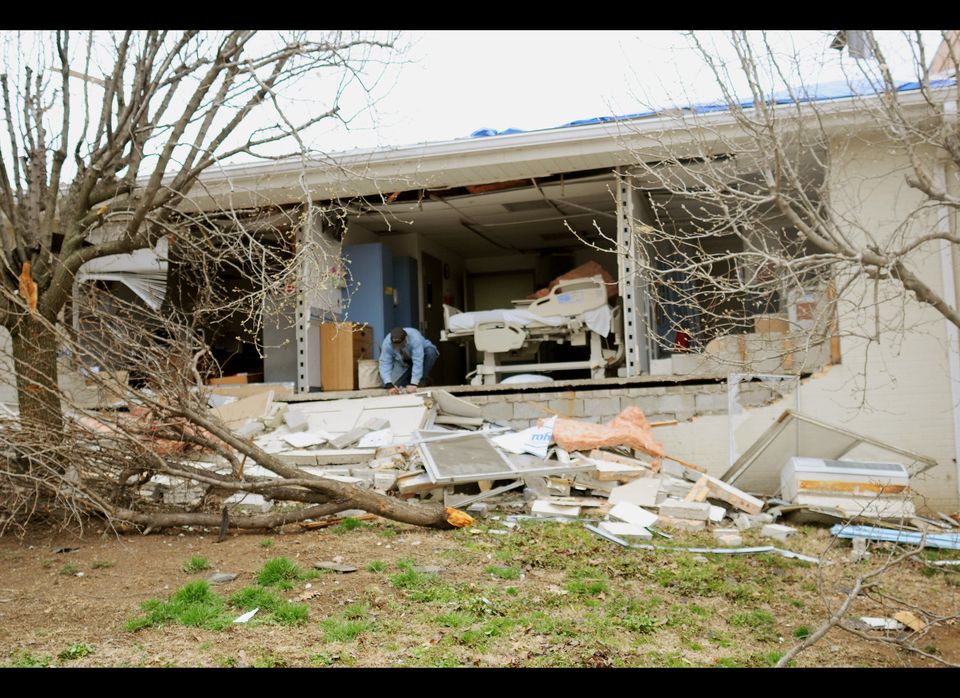