Federal investigators revealed just how lucky actor Harrison Ford is to be alive after crash-landing his plane in southern California last week.

The National Transportation Safety Board released its preliminary report on the crash Tuesday, stating that Ford had no choice but to try and land the aircraft after it lost power. Ford's World War II-era Ryan Aeronautical ST3KR "sustained substantial damage following a loss of engine power and subsequent forced landing after takeoff from the Santa Monica Municipal Airport."

Shortly after takeoff, Ford reported having engine problems and requested to try and return to the airport. When he couldn't make it back, Ford had to put the aircraft down on Venice’s Penmar Golf Course, about 800 feet southwest of the nearest runway, according to the report. The plane clipped the top of a tree just before it crash-landed.

Dr. Sanjay Khurana, who happened to be at the golf course, told reporters that the plane "dropped like a rock" onto a nearby green.

"It felt like an earthquake," Khurana told the Los Angeles Times. He rushed to the scene and found Ford bleeding from a gash in his head. 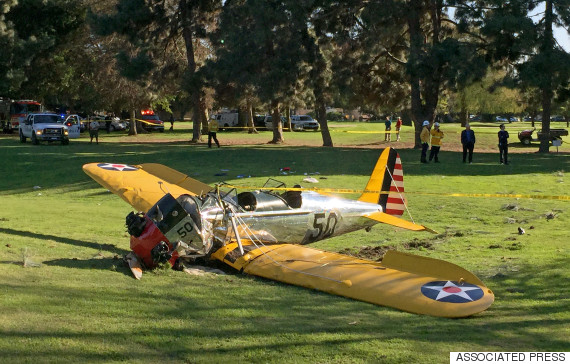 A photo of Ford's plane, which crashed on Penmar Golf Course last Thursday.

Both Ford's publicist and son, chef Ben Ford, later confirmed that the 72-year-old "Indiana Jones" star's injuries weren't life-threatening, and he was going to be "OK."

Investigators will continue examining the 1942 vintage plane, its engine and flight controls, according to the LA Times. A final NTSB report could take up to a year to complete.