In the world of architects, Malibu's Harry Gesner is a legend -- a debonair longboard surfer who, at 86 years old, still paddles on his knees to just past the wave break, where he has been known to sit for hours, meditating and seeking spiritual guidance.

A World War II hero and self-taught architect, Gesner is something of a renegade who was environmentally conscious long before it came into vogue. The stories about his life's adventures are almost as glorious as the nature-inspired homes he builds, and both are detailed in an about-to-be released coffee table book called Houses of the Sundown Sea. The narrative is written by Lisa Germany and the photos shot by Juergen Nogai.

The Huffington Post interviewed Gesner in his Malibu beachfront home, constructed next to his famous Wave House.

Huffington Post: Harry, you're 86! Tell us why you haven't hung up your surfboards yet and why, as the book says, you seek counsel and guidance from your dead parents and uncle when you are out there in the ocean.

Harry Gesner: I feel good out there. I get out and paddle around when the waves are right. Surfing is really a perfect exercise for people of any age as long as the waves cooperate. And yes, I still talk to my parents and uncle when I'm out there. It's not a crazy person kind of talking. More of a meditative type of thing that I think all surfers do. You get out there and wait and wait for your wave.

While you're waiting, you are surrounded by the vast water, birds, dolphins. You are communing with one of the most natural, beautiful forces on Earth. So yes, when I'm out there I still ask questions of my parents and my uncle and still expect -- and get -- answers. But it's simply meditation, not crazy guy stuff.

HP: Your work comes from nature. Your Wave House is, well, a wave. Can you speak a little about that?

HG: I've always transferred my love of nature to my work. When I was designing ski resorts, a lot of the shapes were taken from the way the wind would blow snow on the crest -- you know, the ridges of a snowdrift. Nature is my inspiration. And yes, the Wave House evokes a wave.

HP: How did you come to design the Wave House?

HG: I designed it when I was sitting on my surfboard and looking at the land from the sea. I brought a grease pencil with me and drew it right on my wooden board. It was easier to imagine it from just beyond the wave break.

HP: Is the Wave House your favorite design?

HG: My favorite house is the one I'm working on at the moment. I fall in love with the site and the people and develop a relationship with both. I become completely involved with the problems of the site and resolving them. I become obsessed, totally concentrated on that project.

HP: In that case, what's your current love? What are you working on now?

HG: The Keep House. It's a 10-acre lot on Mulholland Drive. It's completely private. You can't see any other homes, just the Boney Ridge above Mulholland. The house is a series of domes and a tower. The tower is the keep in a castle, the last defense of the castle and the king. It, and my other project, the Mushroom House, will be entirely self-sustaining -- off the grid and self-reliant.

HP: Sounds interesting. When will it be done?

HG: The plans for the Keep House are finishing up in the permit process right now and once it's approved, we will start construction.

HP: I've heard that you are somewhat unique in your construction techniques. For instance, you don't bring a bulldozer onto a site.

HG: That's absolutely correct. I don't defile nature. My designs incorporate my respect for the Earth and I would never use earthmoving machines or bulldozers. I like to use the contours and mountainsides as part of my design. I don't tear up the land for the house or bend nature to me; I bend to nature.

HP: You're not just an architect, you're an inventor. What else do you have up your sleeve?

HG: I am designing a motor for an electric car, a new generation of electric cars. I have a few patents in the realm of changing waste to ethanol -- fuel. Jack Northrup [the aircraft magnate] was my uncle and he took his inspiration from birds of flight. What better source of inspiration to create things that fly? My father and his father before him were both inventors, so this goes back for generations. They invented the repeating shotgun and the lead pencil.

HP: Can you tell us about Nan Martin, the love of your life and wife of 41 years?

HG: Nan was a Broadway and Hollywood star, quite famous and very accomplished, and I had long wanted to meet her. A friend invited me to an award ceremony here in Los Angeles where she was being honored. I sat there in total awe. She was riveting when she spoke. Afterward, we went to a post-awards party and I saw her standing at the other end of the room. I went charging across the dance floor and just grabbed her and kissed her. I said to her "I've been looking for you for the past 20 years." We danced a few dances and I delivered a very corny line. I told her "Let's get out of here. I have a lot of things to tell you." Much to my shock, she agreed.

We went to a coffee shop and for two hours talked -- mostly I talked -- and then I drove her in my 300 Mercedes SL convertible with the top down, over to this empty lot in Malibu. There was a full moon and it was a perfect night. I parked the car and pointed to the Cooper House and told her I had designed it and then I pointed to the next lot with nothing on it and said "If you marry me, I will design a home for you on this lot." She was silent and I took that to be a yes.

We were married 18 months later. 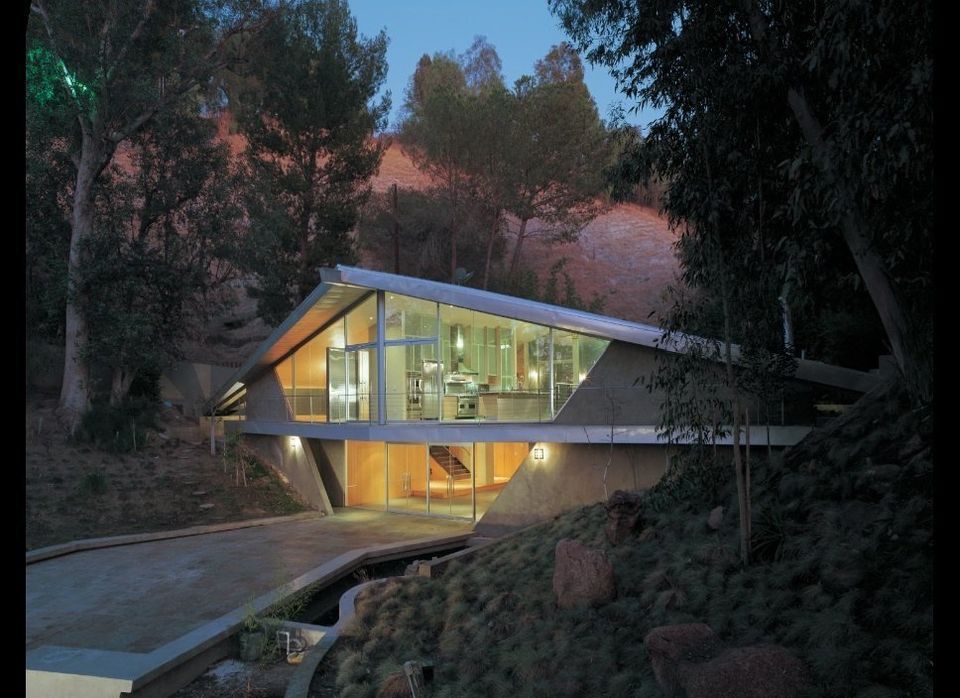 1 / 10
The Kimball House
The Kimball house in 2009. The tumbledown rocky banks are gone and the underside of the bridge is filled in, but the house still captures the beauty of the canyon, connecting its walls across space. (Pages 44-45) Credit: Photo by Juergen Nogai