All over the US today, there are muddled Muggles wandering about. Devoted Harry Potter fans who just couldn't wait to see Deathly Hallows - Part 2. Which is why -- rather than opting to catch the very first show of this new Warners Bros. Pictures release on Friday morning -- they decided to see the midnight show of the 8th HP film on Thursday night instead.

Mind you, the Harry Potter fans who caught the midnight show of Deathly Hallows - Part 2 at the AMC Universal Cineplex 20 will look both bleary & blissful this morning. But that's because Universal Orlando Resort decided to give these moviegoers an extra special treat.

To explain: As last night's screening of Harry Potter and the Deathly Hallows - Part 2 was wrapping up, UOR reps magically appeared in all 20 theaters that were screening this Warner Bros. film. They then announced that all 3000 people who attended the midnight screening of this movie would then be treated to exclusive, complimentary admission to The Wizarding World of Harry Potter. 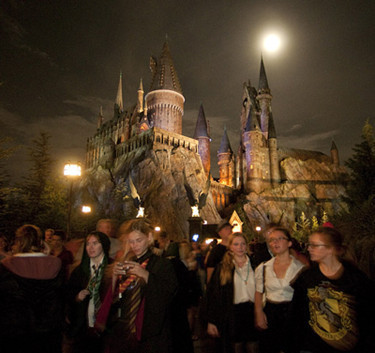 And from 3 to 5 a.m. today, that's just what these folks got. After rushing down the red carpet that Universal Orlando had rolled out for this extra-special occasion, these Harry Potter fans basically had the run of the place. They could tour Hogwarts Castle, sample some Butterbeer at the Three Broomsticks, even shop for a wand at Ollivanders.

Those who attended this event last night just raved about how magical & surreal the experience was. To step out of that darkened movie theater after having watched Deathly Hallows -Part 2 (which -- SLIGHT SPOILER HERE -- features extended sequences set at Hogsmeade Village & Hogwarts Castle) and then -- just a few minutes later -- find yourself right standing in the world of that movie made real ... was just kind of mind-blowing.

But as they say, all good things must come to an end. And as the almost-full moon set and the sun began to rise over Universal's Islands of Adventure, it was time to say "Good-bye" to The Wizarding World and then cross CityWalk in search of their cars.

But -- again -- as tired of as those folks who actually took part in last night's event at the Universal Orlando event may be right now, those who have already reached out to JHM this morning to share their experiences insist that it was the perfect capper for attending the midnight show of Deathly Hallows - Part 2. More to the point, that this after-hours access to The Wizarding World went an awfully long way towards alleviating the sting that one felt as this David Yates film came to an end. What with "Deathly Hallows - Part 2" being the very last movie in the Harry Potter series and all. 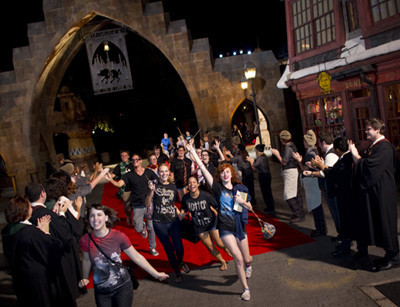 By the way, if you were one of the lucky more-than-3000 who got into The Wizarding World of Harry Potter early this morning, we'd love to hear your take on what this event was like.

For his more immediate musings on movies, TV shows, books and theme parks, please check out his blog, jimhillmedia.com.