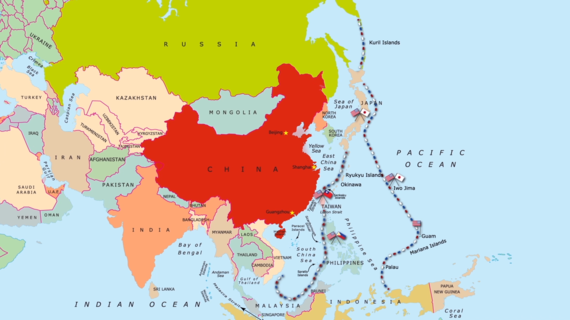 Last month, the Pentagon unceremoniously dropped the name "Air Sea Battle" from its bureaucratic lexicon. However, unofficially, the Air Sea Battle concept has for years enjoyed the same status as Lord Voldemort in the Harry Potter series as that which "must not be named."

The clear political reason for the Pentagon's bureaucratic dodge has to do with the very essence of AirSea Battle - the implied imperative to strike the mainland of China should the People's Liberation Army launch an attack on American forces or allies in Asia.

In fact, the negative response to Air Sea Battle from a strange bedfellows coalition of the American Left, e.g., Amitai Etzioni, and top military strategists like T.X. Hammes when the concept first surfaced in 2009 was nothing short of ballistic. As a result of that public flogging, the name Air Sea battle has now gone the way of all flesh.

The question of how Washington should counter-strike if Beijing strikes first nonetheless lives on. It is a question that may hit any new president smack upside the Situation Room. It is therefore a question that certainly must be asked during this 2016 campaign debate.

This extended, and highly nuanced, excerpt from an interview I conducted for the Crouching Tiger book with Ashley Tellis of the Carnegie Endowment for International Peace presciently captures the essence of Air Sea Battle in a Taiwan scenario:

Harry Potter and the Essence of Air Sea Battle from Peter Navarro on Vimeo.

"There is a clear risk that despite the presence of secure second strike capabilities on both sides, China and the United States could well find themselves in a serious military conflict in the years to come, and the risk of such a conflict arises because China has now steadily acquired the capabilities to prevent the United States from coming to the assistance of its friends in Asia if Chinese political objectives demand such a campaign.

So, for example, if China faces the prospect of a Taiwan that appears to be going independent, China will do its best to suppress Taiwanese military capabilities in order to prevent such a outcome from happening while it simultaneously works to limit the United States from being able to come to Taiwan's defense. And the Chinese tools that will be used in that scenario will be everything from its land-based ballistic missiles targeting American carriers and its land-based ballistic missiles targeting American forward bases to its conventional military instruments to attack U.S. power projection forces that would be moving to Taiwan's aid.

What is the United States to do in such circumstances? It has one of three choices.
One is it can decide that the business of attempting to protect Taiwan has simply become too dangerous operationally and so it changes its political objectives. That is, its cedes Taiwan to China.

The second thing it could do would be to simply aim to defeat Chinese war fighting capabilities though local battles that do not attempt to reach and touch the Chinese homeland.

And the third thing it can do is to conclude that it would be impossible to defend Taiwan purely through defensive actions alone; and therefore, there has to be some measure of offensive conventional operations that target the Chinese homeland.

There is every likelihood that the United States will not do the first. That is, it will not cede Taiwan to China for political reasons.

There is every likelihood that the United States will conclude that it cannot do the second. That is, it cannot protect Taiwan adequately through purely defensive means and therefore it is compelled to go to Option Three, which is to protect Taiwan and all its other Asian allies by including in its strategic mix at least some conventional attacks on the Chinese homeland. Now, this is the essence of air sea battle.

This, in turn, raises the question of whether even conventional attacks on the Chinese coast do not open the door to potential Chinese nuclear retaliation.

Now how China actually responds in such a situation is really impossible to predict with any confidence today. Much will depend on the political circumstances surrounding the conflict. Much will depend on the stakes as Chinese leaders see those stakes. And much will depend on the extent on the damage or the devastation caused by American attacks on the Chinese homeland.
It is possible that some of these attacks will be relatively discreet. They will be relatively focused, and aimed at paralyzing Chinese response capabilities rather than exacting an extremely high human toll. And if that is the case, if we are lucky, China may choose not to respond through any sort of nuclear instruments.

On the other hand, China could do just the opposite and at least threaten the use of nuclear weapons if not actually use them. And then the question becomes if China reaches that point, is American deterrence, the fact that both sides have secure second strike capabilities, is that adequate enough?

And honestly, no one can tell you whether those capabilities would be adequate or not because, deterrence is in many ways a mystical product. We don't know what contributes to it.
We just hope that anyone threatening to use nuclear weapons would be cautioned by the fact that the use of nuclear weapons invites comparable retaliation and that puts both sides in a very untenable position before long."

It should be clear from these observations of Ashley Tellis why we must hear from frontrunners Donald Trump and Hillary Clinton on this issue - and all of the other candidates nipping at their heels.

Peter Navarro is a professor at the University of California-Irvine. He is the author of Crouching Tiger: What China's Militarism Means for the World (Prometheus Books) and director of the companion Crouching Tiger documentary film series. For more information and to access film interview clips, visit www.crouchingtiger.net or see his book talk on CSPAN2.