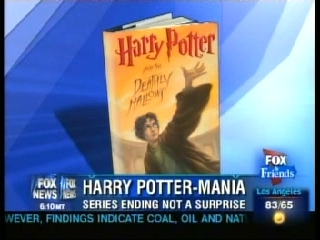 ">
What is your problem, New York Times? No WMD rumors to plaster on the front page, no Jayson Blair to make things up for posterity, no Alessandra Stanley to mangle TV show names? I'm mad so I'm lashing out, but come on: How on earth could you run a review of the last Harry Potter? To do so, you had to break an industry-wide embargo — and not just any embargo, an embargo that is almost tantamount to a public trust at this point, given the worldwide hype about Harry Potter and the excitement and intense emotion generated by — finally — the end to this epic series.

But, hey, you're the New York Times, boldly going etc. Why should you care about honoring a book that's been over a decade in the making just for the sake of getting a two-day jump on the competish? You've done it before, with Bob Woodward and Carly Fiorina, buying both books at some super-secret bookstore where they apparently have no qualms about selling embargoed books to customers who have no qualms about buying them and then writing about them in the paper of record in defiance of millions of wide-eyed and breathless readers. Editor & Publisher reports that "the Times explained that it bought a copy in a New York City store" — just like when they scooped WaPo on Woodward's embargoed book and spilled the beans on HP CEO Fiorina's memoir. That was last October; then I asked, rhetorically: "Where is this bookstore and are they stocking the next Harry Potter?" Well, I guess we have our answer. 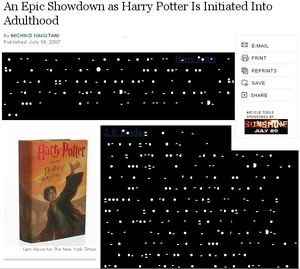 But just because you can does not mean you should — even in the news biz, where information wants to be free and everybody wants to be the one who printed it first. Is the Harry Potter plot and ending, which ostensibly no one knows about (shut UP, Bitorrent, I'm ignoring you!), legitimately news? Of course it is — and the NYT books section, which oughta be an authority on Harry by now, could well have written about the phenomenon of embargo-busting and Harry-spoiling (as it wrote about Scholastic going apoplectic at the idiots over at DeepDiscount.com). But was it necessary to write a review? With who knows what spoilers? That's not rhetorical; I don't know what spoilers because there WAS NO SPOILER WARNING EITHER WAY. So I didn't read it (though in scrolling to the end to see if there was a "with" involved — a sure tip-off to the identity of the book-buyer — I did see the words "Ginny Weasley" and my heart flared with fear, and hope, because Ginny Weasley is AWESOME). But honestly, embargoes are in place for a reason, and entreaties from the author (or the Crying Game director, for that matter) are there specifically for the benefit of the public — the very same public the NYT is purporting to serve with their rushed-to-print review (that's the other thing: How fast did Kakutani have to read — and write — in order to dash that thing off? It's sort of, you know, a long book).

Anyhow, I know the Baltimore Sun reviewed it too — no doubt Scholastic has already read it, since its the go-to place for their HP news — but, well, see above, I'm wrist-slapping the NYT here. Because the Baltimore Sun isn't the self-styled Paper of Record, with its "Talk To The Newsroom" and Public Editor that Bill Keller doesn't think he needs and supposed mission to further the public good. Part of that mission means treating information responsibly and with respect, for the reader and the story itself (and check this out, the graphic above is from this morning's "Fox & Friends" where they refrained from revealing any information and cited J.K. Rowling and Scholastic's plea that even readers who received the book early respect the embargo). I know this sounds hopelessly corny and, well, fine, but we all know that the NYT and Kakutani knew what they were doing, and they did it anyway. Knowing about this book, and what it means, and how many people are hanging on its final release, and what the build up has been to getting here — well, it's a pretty cheap scoop to get.

Also:
What She Said (Back) [Shakesville]

Update, Redux:
Great comments! Harry Potter and the Quasi-Manufactured Media Ethics Controversy! But my favorite has to be from Freethinker below: "Mischief Managed!"