If you’re a reader and have Facebook friend who are readers, you’ve likely seen or even participated in the “10 books that have stayed with you” meme that’s been circulating recently. A prompt for bookworms to share recommendations for life-changing reads, the challenge encourages readers to pick books that have left a mark on you or stayed with you through the years rather than simply picking favorites. Though I’m normally loath to rank my favorite books -- would you rank your beloved children?? -- I was willing to consider which had influenced me the most, whether as a person or as a reader, and to post them in response to a friend’s challenge. The list is a bit of a mishmash, careening from Pride and Prejudice to Lolita, Invisible Man to The Year of Magical Thinking... oh, and the entire Harry Potter series.

Apparently I’m not alone. Facebook recently crunched the numbers on over 130,000 of these statuses from the end of August, and Harry Potter tops the charts, appearing in a full 21 percent of lists containing one or more of the top 500 books. The next book on the list is To Kill a Mockingbird at 14 percent; most of the top 20 books appear in fewer than 10 percent of these lists. The consensus surrounding Harry Potter stands apart, and though Facebook's Lada Adamic and Pinkesh Patel note that it gains an advantage from being clustered together, so were other series of books listed, such as Lord of the Rings and The Hunger Games.

When Harry Potter holds the unscientific title of “Most Influential Book on Facebook," there are bound to be naysayers making dire predictions about the future of literature in a YA-obsessed nation, suggesting that adults shouldn’t still be influenced by books that they read as children -- or worse, read books meant for children as adults. On Gawker, Michelle Dean suggested, tongue planted in cheek, that “many of you are stuck in a Harry-Potter-and-Tolkien-decorated prison of the mind.”

I’d like to get right out in front of this, however, and state that anyone who is shocked by Harry Potter's domination of this list hasn’t been paying attention to the reading world for the past 20 years. In fact, if the respondents skewed younger (Facebook’s post states that the average age was 37), we might see a far higher rate of inclusion for the series that ushered an entire generation into the world of reading-for-fun.

Unsurprisingly, several children’s books appear in the top 20 on the list; as Adamic and Patel point out, we tend to read these books at a very impressionable age. Favorite books from those early years are likely to lodge themselves deeply in our memories. It’s highly likely that the first book that made you love reading was a children’s book, and for most people my age, that book was likely to start with the name “Harry Potter.” This is not to say, necessarily, that Harry Potter is better than the kids’ classic The Phantom Tollbooth or an acclaimed masterpiece like Anna Karenina. It may not even be one of your ten current favorites. But if it’s the series that made you fall passionately in love with all-night, under-the-covers, flashlight-fueled reading, it’s probably one of your 10 most influential reads.

Books can stay with us for so many reasons, and influence us in so many ways. For me, there was the first book that made me see the written word aesthetically rather than simply as a vehicle for narrative; there was the first book that made me get inside the mind of someone wholly different from me and consider the unique difficulties faced by others; there was the first book that made me realize that poetry wasn’t so bad. No book has stuck with me longer than J.K. Rowling's series, but that was just the first of many life-changing reading experiences. And judging by the varied top 100 list published by Facebook -- and the fact that, aside from the top three, no book appeared on more than 8 percent of lists that included a top 500 book -- readers are finding books that stick with them everywhere from children's libraries to school reading lists and far beyond. 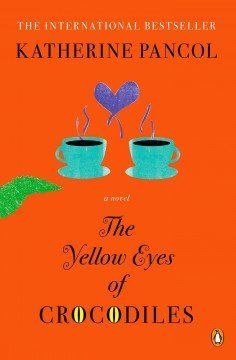 1 / 9
'The Yellow Eyes of Crocodiles' by Katherine Pancol, translated by William Rodarmor, Helen Dickinson
"Aside from introducing a few contrived plot twists, Pancol deftly manages the constellation of characters in a cleareyed, warmly funny tale." As a knife accidentally slices into her wrist, Joséphine realizes she would be glad to simply slip away from her life. <a href="https://www.kirkusreviews.com/book-reviews/katherine-pancol/yellow-eyes-crocodiles/" target="_blank">Read full book review.</a>