What is Spotify without Taylor Swift? Netflix without Friends? Oyster without Harry Potter? While Taylor Swift fans still find cold comfort in their Spotify Premium accounts, the last two ordeals, fortunately, are now in the past: The popular ebook subscription service Oyster announced today that they will be partnering with Pottermore to bring the entire series to their library.

In addition to the seven books in the series, Oyster will also offer the three Hogwarts Library books: Quidditch Through the Ages, Fantastic Beasts and Where to Find Them, and The Tales of Beedle the Bard. If that’s not enough for you, say no more: There will be Hogwarts House themes to gussy up your ereading experience with stylized fonts and color palettes -- just select your favorite house when you begin reading Harry Potter through the service, or choose to be sorted randomly. To kick off the partnership, the Oyster Review will feature all-Harry Potter content Jan. 28-30, including a personal essay about J.K. Rowling's influence by popular Y.A. author Lauren Oliver. 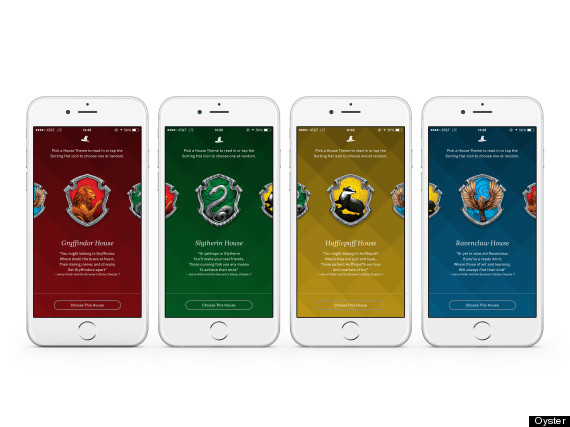 In short, for ebook fans and self-described Muggles, enjoying their favorite books is becoming quite a bit easier. As Oyster pointed out in their announcement, “Harry Potter has consistently been one of the top 10 searches on the service” -- no surprise, considering the enduring popularity of Rowling’s boy wizard. Though, much like Taylor Swift, J.K. Rowling has never needed to make her work available via ereading subscriptions to get them in front of new readers, the greater availability should be a boon to devoted readers and re-readers of the series. The lengthier books, in particular, are ill-suited for cramming into carry-on bags, making accessible e-copies particularly desirable.

Oyster's monthly subscription fee of $9.95 may look a bit steep for potential new subscribers hoping to have those magical books at their fingertips, but for existing subscribers the addition of these perennial favorites will likely come as a welcome perk. It's unclear exactly how many people that is, however; Oyster declines to share its user numbers publicly.

The partnership with Oyster takes J.K. Rowling, who famously started the Harry Potter series on a napkin and wrote on a typewriter in cafés, even deeper into the world of modern technology. Despite those quaint beginnings, Rowling embraced the possibilities digital technology offered her series, founding her website Pottermore in 2009 in order to engage her readers, publish new tidbits about the Harry Potter universe, and build a visual, interactive gaming element to complement the books. Though Harry Potter has been available in ebook form for years, Oyster is at pains to point out that this new partnership is a uniquely immersive offering; says co-founder and CEO Eric Stromberg, "We're thrilled to be the only ebook subscription service today offering all titles in the Harry Potter series, including the three Hogwarts Library Books."