We solemnly swear "Harry Potter" fans are up to no good when it comes to finding plot holes. (Hey, after not receiving your Hogwarts letter when you turned 11, who could blame you?)

Over the years, fans have put together a long list of discrepancies and theories from the books and movies. Some of the most popular include Harry not being able to see the Thestrals sooner, having witnessed his mother's death as a baby, and why the Time-Turner wasn't used to stop Voldemort from doing horrible things instead of just, you know, getting to class on time. (Looking at you, Hermione.)

Now, while most of these plot holes have somewhat satisfactory explanations -- Harry was perhaps too young to have understood what death was at the time his mother died, and, let's face it, whatever dangerous effects there are from time travel are obviously not as important as getting to Muggle Studies on time -- nevertheless, one huge plot hole keeps popping up online, and it may trump them all. 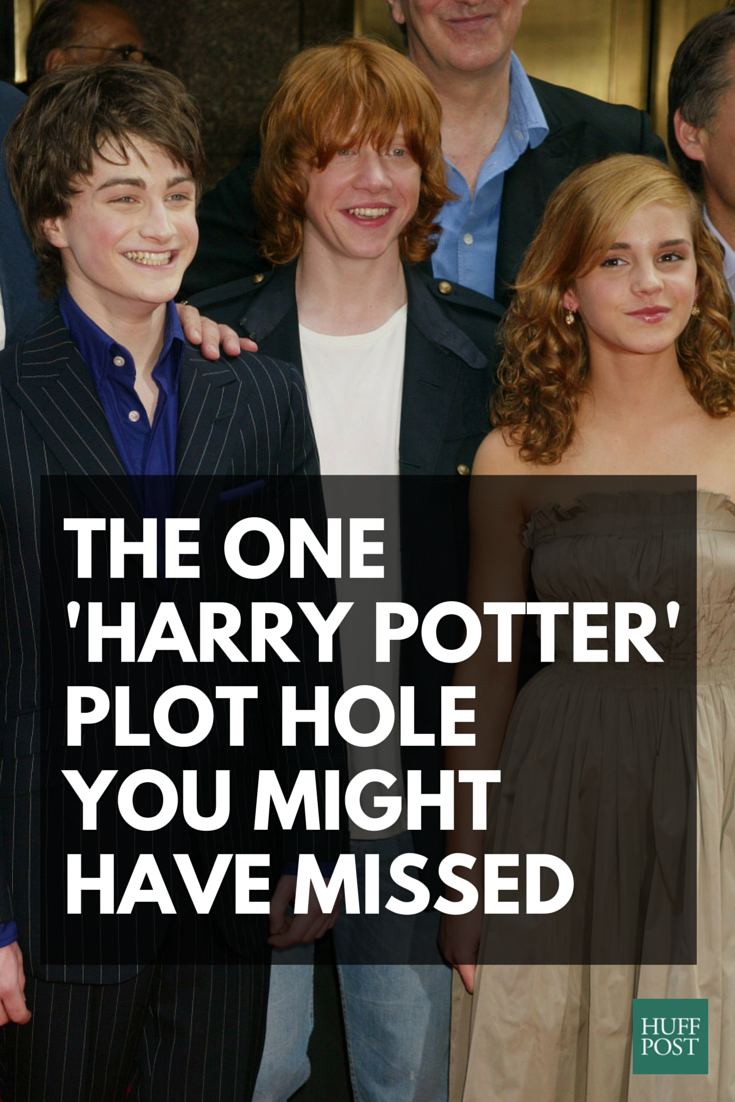 You remember Peter Pettigrew, right? He's the guy that betrayed Lily and James Potter to the dark lord, framed it on Sirius Black, faked his death and then wound up hiding out as the Weasleys' rat Scabbers. That's quite the resume.

Too bad for him there was something called the Marauder's Map, which is a magical document that reveals all of Hogwarts. This actually led Professor Lupin to discover Pettigrew was still alive in Harry Potter and the Prisoner of Azkaban. That's great and all, but the problem is he probably should've been discovered a lot sooner.

As one discerning fan wrote on the site Science Fiction & Fantasy Stack Exchange:

Fred and George stumbled upon the Marauder's Map in their first year. They passed it on to Harry while in their fifth year. Also note that, while talking to Harry [on the] Train, Ron described Scabbers as being "Percy's old rat."

Hence, we can safely assume that the twins had the Marauder's Map for about five years. How could they not see Peter Pettigrew in the map, with Percy for first two years and with Ron for the next three years?

Bottom line, Fred and George had the Marauder's Map for a long time and didn't notice Pettigrew hanging out with their brothers once? Is that even possible?

It's not like the name would be hard to spot. Pettigrew could've probably been seen eating with Ron, hanging with him in the Gryffindor common room or even getting cozy in his dormitory. Or perhaps, as Reddit points out, they just respected Ron's space:

With all the pranks the twins pulled, we can probably all agree "respecting him" isn't the answer.

Fandom website Dorkly even takes it a step further, saying that Fred and George missing Pettigrew was just the beginning. They also should've been able to see their sister Ginny disappearing into the Chamber of Secrets in the second book and even noticed Voldemort showing up on the map in the first one.

So is this plot hole more unforgivable than all the illegal curses combined?

Comments seemingly published in the FAQ section of J.K. Rowling's website show that according to the author, it "would not have mattered" if the boys noticed Pettigrew unless they had been familiar with the story that Sirius Black murdered him:

Even if Fred and George HAD heard the story at some point, why would they assume that the 'Peter Pettigrew’ they occasionally saw moving around the map was, in fact, the man murdered years before?

Rowling also said Fred and George use the map "for their own mischief-making" and there are lots of names on the map, so it'd be easy for a name to be lost in the crowd.

Reddit users also reiterate these points as an explanation.

It should be noted, however, that the Weasley twins were most likely somewhat familiar with the Sirius Black and Pettigrew story, as Ron was actually the one in Prisoner of Azkaban who told Harry that all they found from Pettigrew was his finger:

"Listen... you know what Pettigrew's mother got back after Black had finished with him? Dad told me -- the Order of Merlin, First Class, and Pettigrew's finger in a box. That was the biggest bit of him they could find. Black's a madman, Harry, and he's dangerous."

Whether you think it's an outrageous plot hole or you like the explanation, there's one thing we can all agree on ... you DO NOT just use a Time-Turner to get school work done. C'mon, Hermione!