WASHINGTON -- As the showdown over raising the nation's debt limit and funding the government entered its final week, Senate Majority Leader Harry Reid (D-Nev.) could sense "desperation" seeping into the Republican Party.

"They kept trying to legislate from hour to hour," Reid recalled in an interview with The Huffington Post on Thursday. "It wasn't even day to day."

With Democratic senators united behind him, Reid dispatched the patchwork legislative offers being tossed his way, setting the stage for a complete GOP capitulation. But Wednesday night's resolution didn't come without exasperating moments. In particular, Reid said he was incensed that House Speaker John Boehner (R-Ohio) targeted health care subsidies given to congressional staffers who are required to buy insurance on the newly created Obamacare exchanges.

Weeks before the government shutdown, Boehner's office had privately worked with Reid's staff and the Obama administration to maintain the employer health care contribution. But as Boehner's negotiating position worsened, he publicly demanded that the contribution be ended.

"All of us who worked with him on this [were saying], 'John, what is the matter with you?'’' Reid said. “Okay. Go after members of Congress. But even doing that. Now, I can handle if I have to buy insurance without employer contribution. But some of my senators can’t. Forget about that. Forget about senators. They can do okay. But staff -- we have staff people of [Sen.] Susan Collins. She has people who work in Maine and make $25,000 a year. One of the reasons you can get somebody like that is that you give them health care. I don't mean to ramble on here, but I just can't imagine the thought process of John Boehner. ... How in good conscience could you do something like that?"

“The speaker doesn’t want any staffer -– or any American –- to be subject to Obamacare," Boehner's spokesman, Brendan Buck, told The Huffington Post on Thursday. "That’s why he’s fought tirelessly to repeal the entire law."

That particular legislative gambit clearly struck a nerve in Reid, who brought it up unprompted minutes into a 30-minute interview. But his words for Boehner were mild compared with what he said about the lawmaker who came up with the idea of eliminating the so-called congressional exemption.

Sen. "David Vitter is a, um ... he just is not playing with a full deck. Something is wrong there," Reid said, pointing to his head.

Vitter (R-La.) responded in a statement to The Huffington Post: "Unfortunately, the deck I'm playing with in the Harry Reid Senate is quite full -– of jokers."

Reid, flush from the shutdown fight in which the opposition, in his words, "got nothing, nothing, zero," was not quite ready to spike the football on Thursday. He expressed optimism that Congress would move beyond governance by crisis. But he was unwilling to predict that there wouldn't be another government shutdown when the current continuing resolution expires on Jan. 15, 2014.

Republican leaders, Reid argued, have been "hurt irreparably" by the crisis. But that doesn't mean they're broken. Conservative GOP members aren't going to simply surrender the control they have been exerting on the congressional process.

One conservative who had an outsized influence on the shutdown was Sen. Ted Cruz (R-Texas), who urged House Republicans to attach a defund-Obamacare provision to a government funding bill. When that demand provoked the shutdown, Cruz urged those same House lawmakers to pass only piecemeal funding fixes. A few nights before the crisis was resolved, Cruz was talking strategy with conservative House members at a Mexican joint blocks from the Capitol building.

Reid said that in his 30 years in Congress, he could not recall a senator meddling so much in House affairs.

"Ted Cruz, well, he proved he has a great fundraising operation," Reid said. "But you don't have to have Harry Reid criticizing him. Republicans criticized him. What do you think that vote was last night from Republicans? That was a message to Ted Cruz: 'What the hell are you doing?'… He is a laughing stock to everybody but him. What has he accomplished other than raising some money for president? And if this man can get the nomination to be the Republican nominee for president, I pity the Republican Party.

"Ted Cruz is smart," Reid added. "He has always been able to talk down to people. He is now in the Senate. People are as smart as he is. He can't talk down to anyone anymore. But he has still not accepted that in his own head. He still thinks he's smarter than everybody else. He might be able to work a calculus problem better than I can. But he can't legislate better than I can."

Sean Rushton, a spokesman for Cruz, responded that the Cruz "remains focused on making Washington listen to the people who are being harmed by Obamacare."

"No one outside the Beltway," Rushton added, "cares about politicians squabbling."

Harry Reid On David Vitter And His Obamacare Amendment: 'He Just Is Not Playing With A Full Deck'
Dems' Government Shutdown Stares 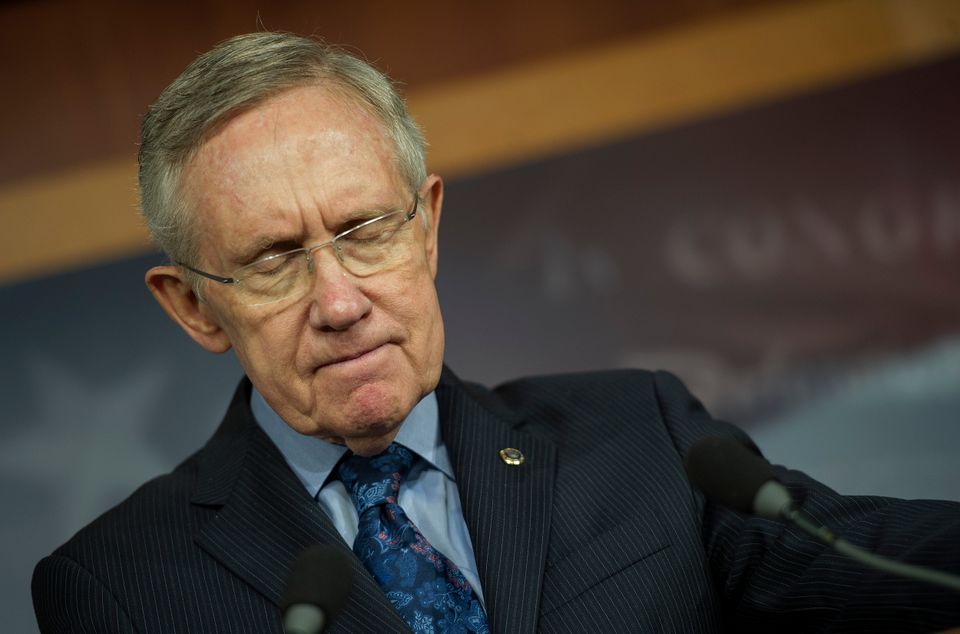