With his total tattoo count reportedly hovering near 30, One Direction's Harry Styles just added another marking to his body.

Styles' new tattoo is a drawing of a huge butterfly, inked onto his torso right below his chest.

A photo of Styles' butterfly tattoo was first posted to tattoo artist Liam Sparkes's Flickr account back in January. Keen viewers suggested it was Styles in the photo, which shows a bare torso and no face.

On Sunday, a representative for the One Direction heartthrob confirmed to E! News that the photo was of Styles.

The Mirror speculated the possible meaning behind Styles' new butterfly tattoo: "The design is believed to [symbolize] someone's life and if they've travelled through rough seas, struggled along the way but are a free spirit."

Harry Styles from One Direction now has a massive butterfly tattooed just below his chest. http://t.co/M0CdcaqxR0

Although it might be unusual, the butterfly tattoo isn't the 19-year-old's first arguably odd ink. He got a ship tattooed on his left bicep in December and has two sparrows tattooed on his chest.

U.K.-based tattoo artist Kevin Paul, who has worked with Styles and the other boys of One Direction, revealed that Taylor Swift's ex likes to make his markings personal.

"Everyone's different, like Zayn [Malik's] got microphones and music stuff and, like, Harry has more personal things, like he has little things for his mom and all that kind of stuff," Paul previously told MTV News. "They're all pretty different on what they have, like their ideas. He hasn't got proper tattoos. They're just scattered around. I think as he gets older he will want proper pieces and he'll have all these little pieces."

Styles' giant butterfly tattoo wasn't the only ink issue the band had recently.

On Saturday, a tweet sent from the One Direction account asked followers, "Have a real #1D tattoo? Show us! Submit a 90 sec YouTube video to 1d3dfan@gmail.com and show us why you should be in the @1D3Dmovie!" However, the tweet was subsequently deleted since many fans of the band are under 18 years old, according to the Independent.

One Direction spokesman Simon Jones responded with a statement, saying, "This tweet was posted in error and has now been removed. One Direction do not want to encourage any of their fans to get 1D tattoos."

Harry Styles Butterfly Tattoo: One Direction Singer Gets Some Interesting New Ink (PHOTO)
Celebrity Tats: From the Weird to the Bizarre 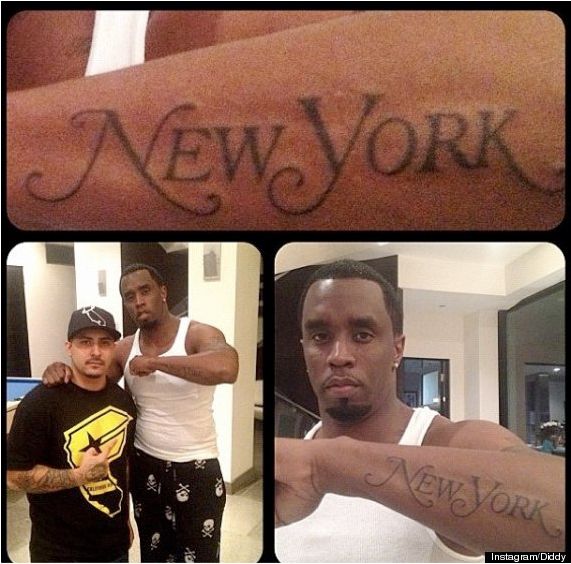 1 / 24
Diddy
Sean "Diddy" Combs loves New York so much, he almost married it. Instead, he got something that's truly for life: a tattoo. The 43-year-old Harlem-born rapper showed off his giant ink on his Instagram page, with the font of the tattoo unmistakably that of New York magazine's logo.
Instagram