The incoming freshman classes of Harvard University and the Massachusetts Institute of Technology, two world-class institutions in the same Boston-suburb, appear to be duking it out online.

Another screengrab circulating online showed each user's message on the Harvard 2017 page reading, "I regret not going to the badass institution down the street," or "Damn, I wish I had as much swag as the MIT kids."

Based on the timestamps of the screengrabs and when students posted about them on Twitter and Tumblr, it appears the hacks happened over the weekend, but they have not been independently confirmed by The Huffington Post.

The pranks caused panic in the private Harvard 2017 Facebook group, and a "Declaration of War" was drafted in response to the "immature prefrosh of MIT":

A "Terms Of Surrender" Google Doc, said to be from the Harvard pre-frosh, demanded an apology from the MIT hackers. However, the document also goes on to demand that MIT 2017 class members provide their Harvard counterparts with "a tribute of several varieties of cookies and cheesecake in sweet abundance" and that they help during Harvard's August 2013 freshman move-in.

UPDATE June 26 -- A reader from the MIT class of 2017, who said he was involved in the prank, tells HuffPost the Harvard 2017 website hack happened Saturday. A notice was posted to the Facebook group about the hack on Saturday around 5:00 pm. 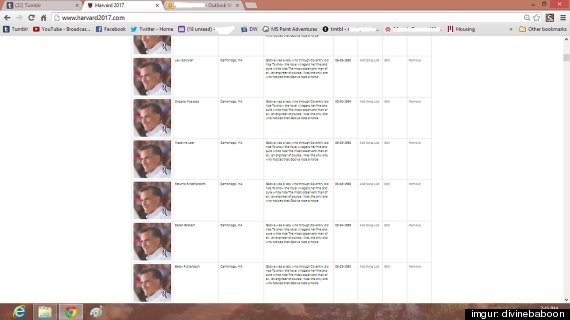