It’s been more than 50 years since Harvard Business School started admitting women, yet the elite institution is still figuring out how to best attract and support them. Its latest effort: a recruiting program targeting women's colleges -- places that are not traditional feeding grounds for the male-majority business school.

The program, announced earlier this month, is called Peek. It offers rising juniors, seniors and recent graduates from women’s colleges the opportunity to read and discuss four HBS case studies in class taught by top HBS faculty members, along with chances to meet students and alumnae. About 50 to 70 prospective students will pay $500 for their stay in June.

“It’s literally a peek into being a student here,” said Dee Leopold, the school’s head of MBA admissions and financial aid. “While prospective students have always been welcome to come and sit in a class, watching doesn’t come close to participating in a case method class.” Harvard’s unique case study experiences allow students to put themselves in the role of a protagonist facing a challenging business situation.

Women make up 41 percent of Harvard Business School's class of 2016 -- the most the school has ever had. In 1985, women made up only one-quarter of the graduating class. Harvard is not alone when it comes to struggling with a gender gap. At Wharton, the class of 2016 is 40 percent women; at Stanford Business school, it’s 42 percent. No top business school has gotten to 50 percent yet.

Despite the Peek program's good intentions, the $500 fee bothered some alumni from the business school and others, said John A. Byrne, the editor of business school news site PoetsandQuants.com

"The fact that HBS, a school with the largest endowment of any in the world, would charge women for the privilege of coming to campus rubbed a lot of people the wrong way," said Byrne, a former executive editor of BusinessWeek.

Leopold said the $500 fee was a “fair price” for room and board at the business school for a weekend, and didn’t actually cover the full costs of the program. Financial aid and fellowships will also be available, she said. 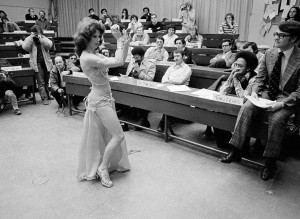 Times have changed: A belly dancer performs for HBS students in 1976 in a marketing class. (Associated Press)

For years, female students at Harvard Business School lagged behind men. There was a little-talked-about gender gap when it came to grades, and women received fewer academic honors than men. Women privately lamented the school’s “frat house” vibe, according to reports. Blatant sexual harassment wasn’t limited to students. Female professors were also subject to hassling from male students, according to a 2013 report in The New York Times. The attrition rate for female professors was high, and women graduates ranked behind their male peers in pay, the Times reported. Even years later, female graduates from Harvard Business School report less satisfaction with their career trajectory, a new study from 2014 found.

In 2010, Harvard Business School got a new dean, Nitin Nohria, who promised a turnaround. Nohria launched a fairly radical program meant to encourage women students and professors, an effort documented in the Times. The school changed up classroom practices, worked with professors to eliminate gender bias in the program and ultimately succeeded in improving women’s grades and getting academic honors for a record number of women, the Times reported.

Last year, in a surprising move, Nohria apologized for the school’s sexist past at an event honoring women alumni in San Francisco. He acknowledged that his school’s treatment of women left them feeling “disrespected, left out and unloved by the school," according to a report from Byrne, who attended the event.

"I’m sorry on behalf of the business school," Nohria said. "The school owed you better, and I promise it will be better."

The dean promised to overhaul the school’s iconic case studies so that at least 20 percent of the protagonists in the business texts would be women -- up from a paltry 9 percent. He also promised to launch a program aimed at getting more women onto corporate boards, according to Byrne's report. The school's efforts around women were part of a campuswide initiative aimed at making Harvard more inclusive.

All the cases in the Peek program will feature women protagonists, Leopold said.