On Friday, February 20th, the Harvard Corporation will defend its investments in fossil fuel companies, whose business activities cause climate change. The Corporation, which currently owns $79 million in direct holdings in the two hundred largest fossil fuel companies, is seeking the dismissal of a lawsuit filed by Harvard University students last fall. The plaintiffs argue that the investments harm students and future generations, violating the University's public charitable duties and other legal duties. 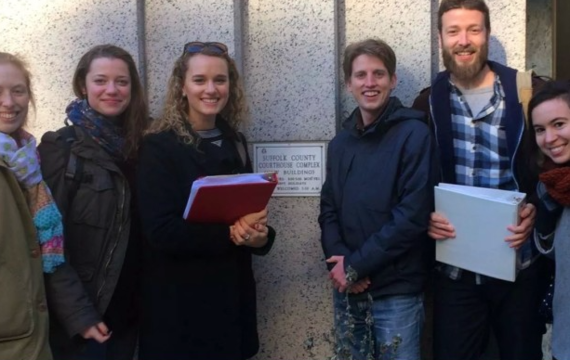 In a document filed with the court, the Harvard Corporation concedes that Massachusetts law requires non-profit organizations to consider how investment decisions relate to their charitable missions. However, it asserts that supporting fossil fuel companies, and therefore climate change, is consistent with its stated mission to promote the advancement and education of youth. The Corporation argues that principles of fiduciary discretion give it broad latitude to invest in any industry so long as it is profitable to do so and that all such decisions should be shielded from judicial scrutiny.

The students will appear in court to argue that the case should proceed. A decision in the students' favor would give them the opportunity to substantiate their claims before the court.

The Harvard Climate Justice Coalition filed its lawsuit in November 2014, after years of the Corporation's refusal to engage students on using divestment to confront climate change. The lawsuit sets a precedent for the global fossil fuel divestment movement as well as for litigation to address harms caused by climate change.

Students, faculty, and alumni at over 400 colleges and universities in the U.S. are calling upon their institutions to divest from fossil fuels. Globally, over 100 institutions have thus far committed to divestment, including universities, foundations, cities, and religious institutions.

The Harvard Climate Justice Coalition invites supporters to join them at their first court hearing at the Suffolk County Superior Courthouse on Friday, February 20th (2 p.m. Room 1015, 3 Pemberton Square). Questions? Check out the Coalition's website or email the team at harvardclimatejustice@gmail.com. And learn more about the fossil fuel divestment campaign on Harvard's campus at www.divestharvard.com.

UPDATE: A previous version of this post included a date that has since been rescheduled for Friday, February 20th.