You haven't heard a lot about it so far in the fiscal cliff debate, but a new report out from Harvard University and the University of Pennsylvania indicates that the majority of the "pain" to come from budget cuts will trickle down to states and cities. As a result, our local governments will undoubtedly have to cut back on basic services to citizens. K-12 education, nutrition for kids, policing, funding of public universities and the maintenance of our roads, bridges and parks could take the biggest hits.

The States Project, produced by Harvard University's Institute of Politics and the University of Pennsylvania's Fels Institute, as well as the American Education Foundation (of which I am the current Executive Director), explains it this way:

If past is prologue, lawmakers will likely try to avoid big cuts to the most politically protected programs -- Social Security, Medicare and defense -- which together make up over half of the federal budget. Once all mandatory spending is considered (including Social Security, Medicare, interest on the debt, and block grants to Medicaid), a relatively small portion of the national budget -- less than 30% -- is left to debate. Contained in that 30% are many of the discretionary block grants to states, which help support programs that are crucial to the everyday lives of Americans: K-12 education, funding for colleges and universities, unemployment compensation, public housing, school lunch programs, state parks, and infrastructure. While grants make up only 16% of federal outlays as a whole, they make up more than 40% of this discretionary portion of the budget" -- or the part of the budget most likely headed for the chopping block.

The report notes that state block grants are on the chopping block because states don't really have advocates in Washington to lobby for state interests. There is no formal avenue by which state representatives can participate in the federal budget process -- a serious fault in our political system, and one that has real consequences for states and their citizens in the coming era of fiscal austerity.

Concerned governors formed an emergency bipartisan coalition to lobby the federal government on these issues. The group met with Vice President Biden last week to make their concerns heard. Even so, state concerns will likely get drowned out by the louder partisan noise between the national parties.

According to the Harvard/Penn report, Medicaid is the largest category of state block grants, accounting for almost 43 percent of all federal grants, or $265 billion in fiscal year 2011. Other social safety net programs (unemployment benefits, food stamps, etc.) constitute about 17 percent of the federal grants to states; education and training make up another 17 percent; and infrastructure and capital needs are roughly 16 percent. 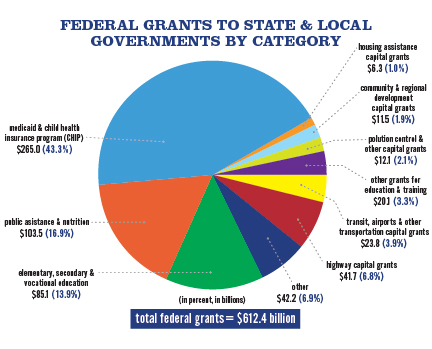 The president's budget for fiscal year 2013 projects increases in grants to states for "mandatory" programs -- driven primarily by rapid growth in Medicaid, which will be expanded by the Affordable Care Act (aka Obamacare). But the same budget projects a decline in outlays for almost everything else. According to the Congressional Budget Office, spending for education, transportation, housing and welfare programs for children will likely shrink by 35 percent between 2012 and 2022. Conversely, the CBO expects federal spending for Medicaid and CHIP to increase by 47 percent in those years.

The report says that these projections indicate that Medicaid is "crowding out" other areas of state spending. Assuming that the federal government has dwindling funds for state block grants, Medicaid will take a greater share of the total, leaving less available for other state spending needs.

The consequences of the reductions in federal block grants to states will trickle down to cities and localities, which are, in many ways, the most vulnerable part of our governmental structure. In order to balance budgets, state governments will likely have to cut spending to local governments. State aid to local governments represents the largest source of revenues for municipalities, comprising approximately 34 percent of municipal budgets.

The States Project indicates that many local governments may face major budget shortfalls if state aid is significantly reduced, having already depleted "rainy day" funds during the Great Recession. In addition, raising municipal debt may be more difficult if cities are perceived to be a bad credit risk. The recent Chapter 9 defaults of some larger cities like Stockton or San Bernardino, both in California, as well as a plethora of credit downgrades for other cities, may give investors pause. From 2009 to 2011, for example, municipal downgrades by Moody's have outnumbered upgrades by three to one.

"Since cities are the last stop on the government money train, budget gaps for localities will have to be addressed primarily with a combination of reductions in public services, some privatization, and tax increases," said the report.

Fragile state and local economies are just getting over the recession. Tax revenues are edging up, but they still have not returned to 2008 levels. Further, the fiscal stimulus, which buoyed state economies and saved thousands of local government jobs, has ended. Meanwhile, states are struggling to care for historically large numbers of poor and unemployed citizens, to fix deteriorating roads and bridges, and, most importantly, to educate our young.

The worry is that just as states are getting back on their collective feet, they will be sent back into deficits by fiscal austerity in Washington. What is most troubling to state leaders is that they will have very little to say about it.