The following is an adapted excerpt from Harvest the Wind: America's Journey to Jobs, Energy Independence, and Climate Stability. Copyright © 2012 by Philip Warburg. Reprinted by permission of Beacon Press, Boston. 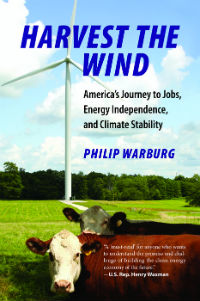 Beyond the immediate financial gains, American wind farm hosts enjoy contributing to an exit strategy from fossil fuels. In the Flint Hills of Kansas, rancher Pete Ferrell angered neighbors when he allowed turbines on his land. They preferred looking at pristine prairie; he chose to invest in a sustainable, locally abundant energy resource.


It's no small wonder that Pete Ferrell has incurred the wrath of many ranchers and conservationists in the Flint Hills of Kansas. They are hell-bent on stonewalling any wind development in this vast stretch of tallgrass prairie. He sees wind power as a promising and profitable extension of the cattle-raising and oil-drilling that already make this a working landscape.

Pete's great-grandfather began assembling property for the family's ranch in 1888, with profits he earned from a dry goods store in Wichita. The family holdings grew to 7,000 acres, but Pete inherited only a third of it. To keep the ranch intact, he bought back some of the acreage from his aunts and uncles. This left him carrying a crushing debt. "If you inherit land and it's debt-free, you can probably make a decent living, but paying interest and principal on land?" He tells me that the last time farmers and ranchers could break even on land that they had to purchase was in the 1920s.

As he struggled to amass enough capital to purchase the remainder of the ranch, Pete eventually realized the toll this was taking on his health and well-being. "I was looking at a situation where I was going to join the Old Dead Ranchers Club, which is a group of great people who work 24/7, 365 days a year, until they fall over dead. 'Congratulations, you're a member,'" he says with a sardonic grin. We are sitting in his adobe-style ranch office, just across a rutted driveway from the hollow where he lives in a simple, unpainted wood cabin with his two dogs. The divorce from his wife some years ago, I can guess, only added to his financial stresses. 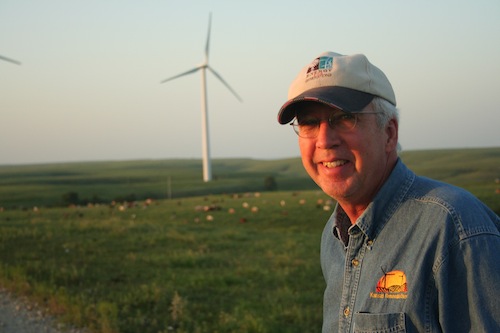 It was in the late 1980s that Pete became interested in the holistic management principles that economist Stan Parsons and ecologist Allan Savory had begun advancing through their teachings. Attending one of their training sessions, Pete was asked to catalog the full array of values on his property. He started underground with the oil resources that had yielded a handsome income for his mother over many years. (Even today, a half-dozen of those wells remain visible on his land, although Pete says they're drying up.) Then, rising to the surface, he reflected on the soils, the grass, the sun, and the water that make it possible to graze his cattle. Finally he was asked to delete those activities that are unsustainable or are not ecologically sound.

Wind was on the short list of what was left. Half-obscuring the windows in Pete's office today are two maps showing the distribution of wind resources in Kansas. Even without those maps, he knew that the winds in his section of the Flint Hills were exceptional. Today he hosts about half the turbines in the Elk River Wind Farm, a project that generates enough power to meet the needs of about forty thousand Kansas and Missouri households. 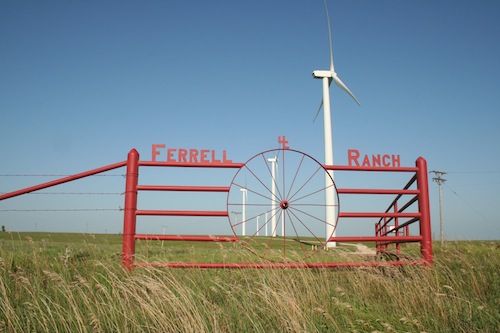 Along with stabilizing his ranch's finances, Pete firmly believes he is helping wean America off energy resources that, in the greater scheme of history, are moments away from running out. To make this point, he unfurls a few dozen feet of computer paper, starting on the floor of his office, continuing out into the foyer, and then reaching across the full length of a second room where his ranch manager keeps track of cattle shipments. This long paper trail, ragged from repeated use, likens the past 750 million years of history to a single calendar year. Pete takes me to the final few perforated sheets and points to December 11, the date when mammals show up. Homo erectus appears the day after Christmas; Homo sapiens on December 30. At three seconds to midnight on December 31, we begin to burn petroleum, and by three seconds into the New Year, Pete tells me it will all be gone. "We have a whole civilization built on something that's gonna run out," he told a roomful of fellow Grinnell alumni when he lectured on this topic at a recent college reunion.

Rose Bacon is among the Flint Hills ranchers who take a cynical view of Pete's efforts. "People don't believe he's a wind conqueror; they believe it was for the money... I feel bad that he had to make that choice because he's lost so much." I ask what he has lost, and she tells me: "Friendships and respect."

Pete, for his part, is now working on a project that may bring as much as 800 megawatts of wind power to cultivated farmland in southwestern Kansas -- more than five times as much as the Elk River Wind Farm. Luckily for Pete and others in the Kansas wind trade, there are ample opportunities to tap the state's enormous wind potential outside the Flint Hills.