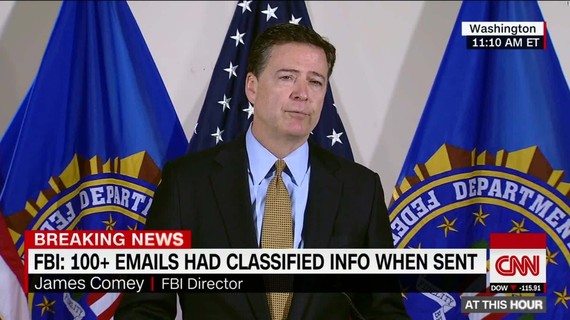 Hillary Clinton was relieved when FBI Director James Comey, in his Colin-Powell-Before-the-UN hazing moment, and through some strange extra-legal contortions - sir, intention is not a prerequisite for violation of section 793 of the federal penal code (Title 18)) - let the Democratic nominee for President off the criminal hook. He did so even though Comey presented sufficient evidence against Clinton for the Justice Department to convict her and her subordinates of felonious gross negligence, intentional or not.

Team Clinton was doubly relieved that they have in Republican Presidential nominee, Donald Trump, a candidate sufficiently unschooled in the nuances of the Clinton email scandal to reach for wild conspiracy theories (e.g., Republican Comey was in on some Clinton-Lynch-Obama Democratic plot, rather than just circumspect for legal and slightly self-serving career reasons).

After the Comey non-indictment indictment, these two factors seemed enough to give Mrs. Clinton an easy general election triumph. She dodged a uranium-tipped bullet, perhaps the only bullet that could have caused enough Independents and Bernie backers to question her character, competence, and judgment and try their luck with Jill "Not Hill" Stein (Green Party) or Gary Johnson (Libertarian Party). I do not think many of these voters were or are going to switch to the similarly unpopular Mr. Trump. But depressed numbers for Clinton would buttress the colorful real estate tycoon in swing states with strong Trump demographics (white, male, middle and working class, non-college-educated).

Several weeks after "the Comey primary," I see things differently. Mr. Comey, in publicly rebuking Mrs. Clinton for her "extreme carelessness" in handling classified information, opened up a giant can of killer worms, which will slowly bore into the Clinton firmament, no matter how clumsily Trump handles this gift from the political Gods. That is, Mrs. Clinton might have earned a pyrrhic battle victory in her convoluted email and server scandal (which, by its Byzantine nature, gives Mrs. Clinton sundry fallback excuses), while the table is set for her to lose the mother of all Clinton corruption wars. 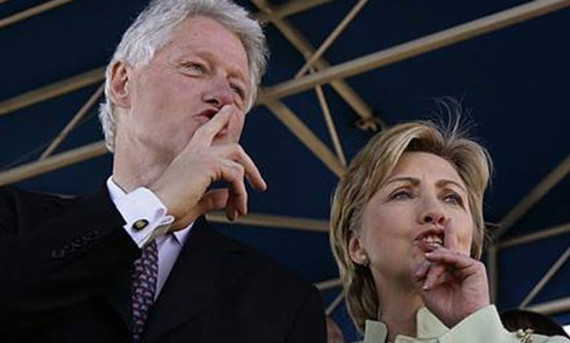 The evidence showing clear-cut, stupid-proof, quid-pro-quo between Bill and Hillary Clinton donors and candidate Hillary Clinton is getting too obvious to ignore. The case of Rajiv Fernando, founder of Chicago-based high-frequency trading firm Chopper Trading, is the tip of the approaching iceberg. Thanks to State Department emails obtained by watchdog group, Citizens United, as well as investigative work by ABC News, we now know that Mr. Fernando gave up to $5 million to the Clinton Foundation and tens of thousands more to assist Mrs. Clinton in paying off her 2008 campaign debt, while also acting as a major Clinton donation bundler. 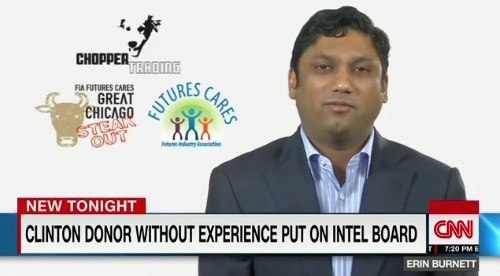 In exchange for his fundraising prowess, Fernando secured a coveted spot on the powerful International Security Advisory Board (ISAB) and concomitant access to our nation's highest-level intelligence. It's a position for which the "wealthy commodities broker" had zero experience or knowledge. The blatant quid pro quo was confirmed in a September 11, 2009 email from Fernando to then Clinton deputy chief of staff (now campaign vice chairwoman), Huma Abedin: "If there is any way I can be a part of the list of the final 25 I would be grateful. Please let me know if there is anything you need me to do."

Shortly after trying to have an ABC reporter arrested for legitimately asking him questions about this cozy arrangement, Mr. Fernando resigned from the ISAB, though he remains a big Clinton donor and is - in a laughable twist - a Clinton superdelegate.

Democratic Presidential candidate Bernie Sanders, a ferocious critic of high-frequency trading (HFT), as well as the crony capitalism at the heart of the Democratic Party's superdelegate system, likely had access to the Fernando information late in the Democratic campaign. However, the Vermont Senator weirdly chose to talk in generalities about Mrs. Clinton's Wall Street connections, rather than isolate the depths of the Clinton pay-to-play corruption.

Meanwhile, mainstream media are loathe to broach the topic in depth, lest they do the dirty work for a candidate they genuinely hate, and feel threatened by, Mr. Trump. So, continue to expect the usual litany of lead stories about the latest Trump tweet. 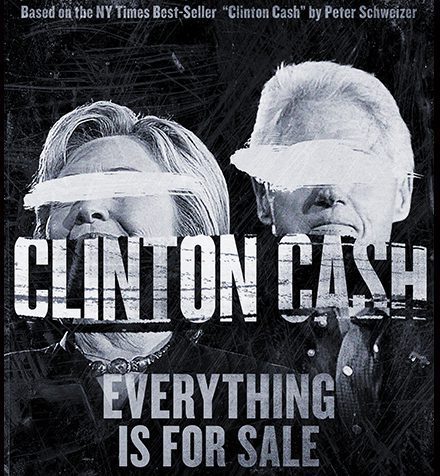 Meanwhile, as the State Department stalls the delivery until after the general election of thousands of emails that likely document Clinton quid pro quo, I expect more sordid stories to leak. Expect to hear about shady Clinton dealings surrounding UrAsia Energy, Uranium One, Canadian logging concerns, gay-friendly Saudi Arabia, the uber progressive Sultan of Brunei, and for-profit concern Laureate International Universities (whose dirty contributions make Trump University's creative shenanigans seem like Montessori School). As someone who covered for-profit education scandals for years at Forbes, I can assure you that the $16.4 million that Bill Clinton received as honorary President of deceitful Laureate (whose investors include big Democratic Party and/or Hilary donors like George Soros, Paul Allen and Steve Cohen) is more than coincidental. It's corrupt. 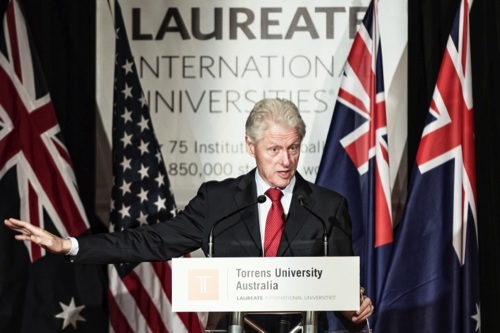 The mainstream media is all over Trump University, but nary a peep about Laureate. Nevertheless, based on these pay-to-play arrangements, sixty-four members of Congress just called on the IRS, FTC, and FBI to investigate violations of its 501(c)(3) nonprofit status by the foundation run by Bill, Hillary and Chelsea Clinton.

As we draw closer to November, "Clinton Cash" allegations will move from being written off as right-wing conspiracies, or Bernie Bro fantasies, to inescapable wrongdoing that a "reasonable prosecutor" would feel compelled to prosecute. When the public fully digests this far greater corruption, likely after the fall election, Mrs. Clinton might not be so lucky a second time around. 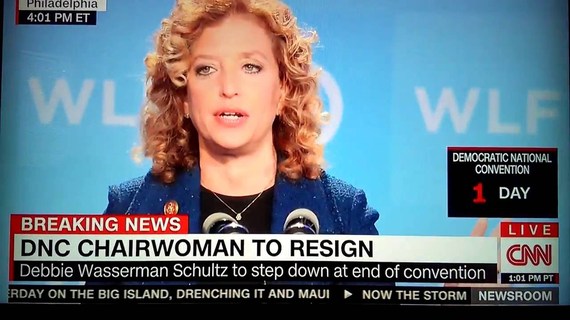 It is no surprise that this far greater corruption will likely be tied up with that predictable Clinton albatross: emails. With the wholesale hijacking of the Democratic National Committee's email database and concomitant dissemination of the DNC's racist, sexist, and anti-Semitic voice and email communiqués via WikiLeaks, an inescapable and unshakeable narrative of Democratic cyber incompetence, dirty deeds, and pay-for-play corruption has emerged. Not that the DNC leak scandal stopped Mrs. Clinton from hiring chief enabler of the breach, and the corruption, and Mrs. Clinton's coronation, former DNC Chairwoman Debbie "I See Nothing!" Wasserman Schultz.

However, as if the DNC Wikileak scandal was not enough, an even stranger and more threatening meme has also appeared. On Wednesday, July 27, Mr. Trump jokingly mused that if the Russians had indeed hacked the DNC's servers maybe they could find Hillary's 30,000 deleted emails. You know, those emails that were ostensibly about yoga and Chelsea's wedding.

It was a typical Trump throwaway line, but Mrs. Clinton's earnest storm troopers did not take it so. In their literal-minded overreaction to a clear joke, they fell right into Mr. Trump's trap, confirming that maybe there were work-related communiqués in that tranche of destroyed emails. Maybe there were emails that subtly documented a quid pro quo between the Clinton Foundation and the Hillary Clinton State Department. Maybe there were more emails of a top-secret nature.

We will likely never know. But no matter how much the Clinton News Network (CNN) and its lockstep biased brethren at MSNBC, PBS, The New York Times, Mother Jones, The Nation and NPR tries to muddy the waters by making this a matter of Trump's temperament, the stench of corruption and incompetence has stuck to Mrs. Clinton's otherwise historic Presidential campaign. Any direction that Team Clinton now turns, they are seen as either incompetent or duplicitous or both. Meanwhile, Mr. Trump smiles his Cheshire grin. 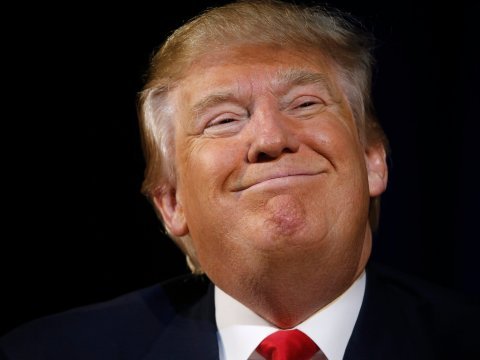 Please remember that James Comey never fully absolved Hillary Clinton for her "extreme carelessness." Foreign powers could have accessed Mrs. Clinton's private server. Comey just could not prove it. In other words, it was unprecedented luck, not competence that shielded our nation's top secrets under Mrs. Clinton's sloppy State Department tenure.

Even with this troubling backdrop, even though this is the year of the outsider, I still believe that the deeply flawed Hillary Clinton will win in November. This is in part because of the occasionally random statements of the unhelpfully conspiratorial Donald J. Trump, who almost never fails to let a colossal Clinton cock-up go to waste. If Mr. Trump becomes more rhetorically disciplined and policy savvy, as he is showing signs of doing, this equation could change.

But, for now, given the strong push Mrs. Clinton is getting from popular surrogates like Barack and Michelle Obama, Joe Biden, Liz Warren, and Bill Clinton, combined with the vaunted Democratic ground game, I expect her to sneak out a victory. After all, the political-media-money-entertainment establishment has too much on the line to allow a genuine disrupter - who directly threatens their cozy, obsequious and unholy relationship to power, privilege, and prestige - anywhere near the White House. Moreover, as Chicago politicians like Mr. Obama and Mrs. Clinton well know, patronage can silence many critical voices. 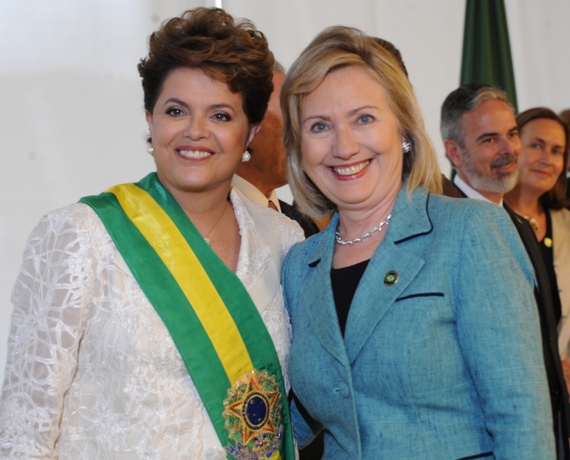 Regardless, Inauguration Day, 2017 will be Mrs. Clinton's high water mark. I am sensing an ensuing Dilma Rousseff moment that will hit Mrs. Clinton's first term like a tsunami, as her Bernie-driven promises of free college tuition, minimum wage increases, and various forms of redistribution get scuttled and she, in a reprise of her husband's troubled tenure, spends precious time and political capital trying to save herself from the slammer.

Something to ponder as you decide whom to pick for President.