Serious people have been suggesting that we think hard about eliminating paper currency. Paper money facilitates criminality and creates the zero lower bound (ZLB) for nominal interest rates. So, why not just get rid of it and replace it with electronic money?

There is an enormous amount of currency out there. For dollars and euros, the value in circulation is in the range of $4000 per inhabitant. In the Japan, the number is nearly twice this big. And, most of the notes in circulation are large denomination: 77 percent of U.S. currency is in $100 bills, 53 percent of euro area currency is in bills of €100 or more, and ¥10,000 notes account for 87 percent of Japanese paper currency.

The arguments in favor of getting rid of all this stuff are powerful. Law-abiding taxpayers simply do not keep this amount of cash around. The natural conclusion is that the extraordinary volume of currency -- especially the large-denomination component -- is funding illegal activity, both outright criminality and more mundane tax evasion. Eliminating paper currency -- forcing all transactions through some traceable settlement system -- would surely help reduce this.

Much of the recent discussion about paper money has focused on the second problem it creates: the ZLB. As we noted in a post on ECB policy, the ability to store physical bank notes means that the central bank's policy interest rate can't really go much below -0.25 percent. (In June, the Governing Council lowered the rate on deposits to -0.10 percent.) In the absence of paper money, central banks can reduce the nominal interest rate as far as they want by varying the fee they charge banks on their reserve deposits; and banks would presumably turn around and charge their customers for holding deposit balances. Very negative interest rates could help battle deep economic slumps like the Great Recession that began in 2007. (For a nice summary of the arguments, see Miles Kimball's posts here.)

Yet a third big bonus from eliminating currency would be to bring the shadow economy into the light. That is, activities that are evading the eye of tax collectors and national statisticians would be forced out into the open. For some countries, even advanced ones, the potential gains are quite large. Recent estimates suggest that Spain, Portugal, Italy and Greece, the most prominent examples, have shadow activity that is roughly one-quarter the size of officially measured activity, as illustrated below. 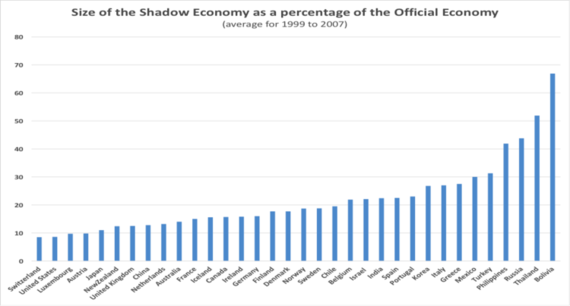 Transparency might shift portions of this income to other jurisdictions or wipe some bits out, but a substantial fraction of it likely will remain and be taxed. Increasing measured GDP by 25 percent would significantly reduce reported debt-to-GDP ratios. For example, the ratio of Italian general government debt to GDP would drop from something like 145 percent to more like 115 percent; for Spain, 105 percent to 85 percent; and so on.

Not so fast, you say. Wouldn't everyone have to get rid of paper currency to make this work? If the United States eliminated dollar bills, wouldn't criminals shift to euros, yen, sterling, and the like? The answer is surely yes. To be effective, there would have to be a widely implemented international agreement. Any country that issues a trusted currency that retains its value would have to get rid of notes and coin (except, perhaps, for very small denominations). In addition, countries would have to tax or forbid the introduction and use of private notes that could substitute for the public varieties.

More importantly, aren't there benefits to having cash around? The answer is obviously yes, but the pecuniary advantages are relatively small. Governments receive seignorage (the ability to acquire real goods and services in exchange for fiat currency) for issuing notes and coin, and that revenue has the potential to be pretty big. After all it costs something like 10 cents to produce a $100 bill -- that's a 1000 percent markup. In the case of the United States, total currency in circulation is currently $1.2 trillion, consistent with perhaps $1 trillion of seignorage.

But reduced tax evasion could offset this loss of seignorage. Say that the U.S. underground economy is 8 percent of nominal GDP (a bit less than World Bank researchers estimate), or about $1.4 trillion. At an average tax rate of 20 percent (similar to the current share of federal, state and local tax receipts as a share of GDP), the extra revenue could exceed $270 billion per year (assuming, admittedly, that the tax does not significantly reduce the activity). At a 4 percent discount rate, the present value of that annual flow would be about five times the lost seignorage.

But there is another, very different argument for keeping cash around, and it is a powerful one. The anonymity of paper currency can liberate people, freeing them from their governments. In democratic societies, people sometimes misuse that freedom for criminal gain. As we just argued, one solution is to get rid of anonymous transactions. But in tyrannical societies, the government could use its intimate knowledge of people's payments as a method for malevolent control. There is a very real sense in which we are what we buy, so protecting our privacy requires controlling information about our payments. Cash is a vehicle for freedom. Freedom from homicidal dictators as well as freedom from tax collectors. Ultimately, if someone is going to issue cash to protect these freedoms, it might as well be the government that collects the seignorage rather than a private agent.

All of this leads us to conclude that paper currency is at the heart of how we choose to organize our society. In a free society, criminality may be part of the price we pay for liberty. There are means other than eliminating cash - less effective but also less threatening to personal liberties -- to expose the shadow economy. And, as the recent financial crisis has shown, central banks do have policy alternatives when the short-term interest rate hits zero.

More:
MoneycashcurrencyBanksbanking
Newsletter Sign Up
An essential daily guide to achieving the good life
Subscribe to our lifestyle email.
Successfully Subscribed!
Realness delivered to your inbox