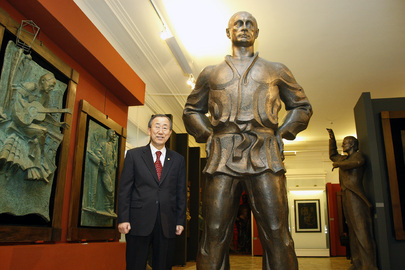 Will consumers in the West actually see petroleum prices drop rather than rise? The Ukraine crisis might have been expected to dramatically raise petroleum prices, as the rift between Moscow and Western consuming states has threatened access to Russian reserves and supply to the market. Instead, prices have remained subdued. The more determinative factor may be the sanctions that are being imposed by Washington and the EU against the Putin inner circle and crony capitalists. Much of the recent wealth accumulated by Putin and his entourage has purportedly come from commodities speculation via several dozen trading firms they controlled.

Targeting Putin's Energy Trading Operations? Sanctions have targeted this inner Putin circle, including the head of Russia's and the globe's largest oil company Rosneft, Igor Sechin and Gennady Timchenko, a controlling partner in Gunvor Group (See -- Bloomberg story US Targets Putin with Sanction Against Gunvor Oil Billionaire). US and EU sanctions do not necessarily target the same individuals and firms, but appear to most prominently affect energy, commodities trading, and financial institutions. Many of the Russians targeted followed a career pattern and road to wealth from government official close to Putin to oligarch, including Sechin and Timchenko.

Gunvor was established in Geneva by Timchenko and Swedish billionaire Torbjorn Tornqvist "to handle Russian crude shipments," in 2000 about the same time coincidentally or not when petroleum prices began a sharp rise. Timchenko had been a Russian Trade Ministry official who aligned with Putin in the '90s. By 2012, Gunvor had revenues of almost $100 billion. According to the US Treasury Department, "Timchenko's activities in the energy sector have been directly linked to Putin. Putin has investments in Gunvor and may have access to Gunvor funds."

Trading in the oil and commodities arena can be executed from any corner in the globe and concentrates into several markets including those largely based in New York (WTI) and London (Brent). Much of the trading is by speculators rather than producers and/or end users. Some estimate that in the petroleum markets, 90 percent of the trading results in no actual transfer of the underlying commodity, but is rather a "bet on the trend." Thus with such opportunity and temptation for quick wealth, no surprise that allegations of manipulation or fixing of commodity, particularly energy prices, are widespread. More frequently than not though, OPEC or oil companies have been most frequently associated with such charge. However, Russia as an economy is most reliant upon oil and other natural resources -- and Putin's administration has been effectively wielding such as a tool of national policy.

Greasing the Skids of Nationalism & Sweeping away Dissent

The EU has been stymied from confronting a resurgent Russian imperialism promoted by Putin due to fear of losing energy supplies and trading opportunities. The crafting of Putin's new Euro-Asian vision -- in effect a new "Greater Russia" assembled from the remnants of the old Soviet Union in Central Asia and Europe -- has been greased by a pipeline delivery system under the Kremlin's control. The huge wealth generated by petroleum has also enabled Putin to further pan-Slavic and/or pan-Orthodox solidarity (depending on which nationalism is expeditious for the moment) -- from Ukraine to Serbia to Russia. Resurgent Russian nationalism amplified by more ample state subsidies has dampened calls for greater democracy, transparency, free media and more open Russia.

The motive exists, but have Gunvor and other commodities and financial trading firms provided the means? Again, the evidence is more circumstantial but also more explicit. If not, why would the US and Europe target individuals/firms trading in energy under Putin's or Kremlin's direct control? It is noteworthy that while petroleum prices have increased five-fold since Gunvor, there has been no shortage of product. In fact, the last few years have witnessed reserves and stockpiles unprecedented for almost half a century. The rise of China and other developing economies has been forwarded as rationale for increasing prices, but supply has been in front of demand. Efficiencies and alternative energy resources have also been rapidly expanding. Nonetheless, when certain presumed oil shocks occurred, like Iran sanctions or the Libyan conflict, prices spiked. Even minor geopolitical events, relatively speaking, like the bombing of a Nigerian rig, would be employed as pretext for prices to jump by 5-10 percent or more. On the other hand, when Putin now threatens to exclude Western oil companies from Russia's energy industry, the market only sneezed and then oil prices returned to previous levels or even lower. When energy prices traditionally rise into the US and Europe "driving" season, gasoline and oil prices have actually this year remained subdued, again despite all the presumed risks of a Ukraine conflict spreading to Russia and even beyond to its Central Asian neighbors.

Why Have Energy Prices Not Risen this Time?

From Iran to Venezuela to those closer to the US as Mexico and Azerbaijan, none would have an interest in following Putin's Russia into any curtailment of oil supplies. In fact, Putin knows that an embargo would hurt Russia more than Western consuming states. Any partial or full cut-off would also accelerate a shift toward alternative suppliers and/or renewable energy. Big oil reserve states, such as Saudi Arabia, are concerned that a spike in prices could trigger an ever more rapid transition to alternative energies. Thus, the threat is highly speculative and unlikely to materialize. The impact of a natural gas cut-off would be more problematic, not so much due to prices, but the intertwined dependence of many European states on pipelines and flow emanating from Russia.

From "Pussy Riot" to Islamists:

Beyond the accumulation of personal wealth, the open showdown with the US and EU is exposing Putin's operations, gauging of Western consumers and plundering of his own state. It was not though just about previously tolerating Putin's excesses in order to maintain his presumed goodwill in a politically chaotic global scene. Russia was being nurtured as more partner, and Putin's regime was perhaps viewed as ally by some Western governments in the battle against presumed "Islamists," as former UK PM Tony Blair has recently suggested. However, the brutality of Putin's regime is more likely to provide fertility to further Islamic extremism while also nurturing a new Russian imperialism, itself a high-octane cocktail of nationalist and religious extremism. This brew has gone well beyond just suppressing opposition, secular or other at home -- "Pussy Riot" and Islamists in the Caucuses may not share much except the experience and insight into Putin's tool for repression. Putin's invasion of Georgia, perhaps, could be overlooked as a "one-off," and his repression at home may have been rationalized in terms of stereotypes applied to Pussy Riot, Islamists and "Russians" themselves as a people inclined toward despotic rulers. However, the undermining of and creeping invasion of Ukraine has fundamentally altered the narrative, and thus the equation of what would be tolerated.

The Narrative Is Fundamentally Altering the Equation(s):

Perhaps oil producers from state to corporate had passively or otherwise ridden the price up with Putin -- why resist? Even US administrations promoting alternative energy sources, carbon based and/or renewable, may have viewed higher prices as necessary catalyst. The anonymous character of trading exchanges and an increased tendency toward excess had been transforming the virtues of capitalism into a dangerous, shady jungle where predatory behaviour has been tolerated, and operations as vested by Putin for personal and/or nationalist gain thrived.

The equation along with the narrative has changed though. Energy markets and trading operations need financial lines of operation. (It is perhaps only coincidence but fortuitous that trading exchanges, from Foreign Exchange to commodities, have come under greater scrutiny.) While sanctions may be applied as punishment in part, more critically depriving Putin's Russia of cash to fund its new expansionism. (It is an unspoken rule among heads of state not to directly target other number ones with assassination or most direct sanctions, part courtesy and part strategy in dealing with crisis.)

Upping the Pressure on Putin, Relief for Consumers? With the Russia veto effectively blocking the UN Security Council as option for resolution, the US and Europe cannot rely upon universally mandated/applied measures, but rather must employ ever more ratcheted pressure. Even Chancellor Merkel of Germany, whose economy is most dependent now on Russian energy, has at least rhetorically indicated a greater preparedness to up sanctions, even potentially on the petroleum/gas sector. Again, the reflex may be to expect a spike in global energy prices. However, with ample supplies, growing alternatives and choking of Putin cronies' financial pipelines, petroleum prices may lapse-trend toward sensitivity to actual supply and demand factors. Ironically, less Putin may translate to more free markets, at least in energy.