All things considered, the major equity markets of the world have been fairly orderly for the past year and a half. That is, all except the Chinese market. After climbing a hefty 144% from the beginning of 2014 through mid-June, 2015, the Shanghai Composite has now dropped 32% in the past four weeks. Following the "correction", the Shanghai composite is still up about 66% - far better than any of the other major world markets.

In the graph below, we show the contrast in volatility between China and the other major world markets. For the US, Japan and China, we used the S&P 500, Nikkei 225, and Shanghai Composite, respectively, which track price levels in local currencies. For Europe, we used the WisdomTree Europe Hedge Equity ETF in order to eliminate the effects of currency changes, thereby keeping the comparison apples-to-apples. 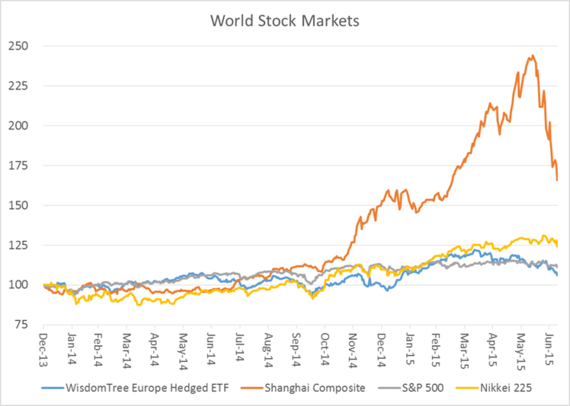 The Chinese authorities appear to be pulling out all the stops to avoid further stock-market losses. The Chinese central bank announced it will make loans available to brokerages so that they can increase margin lending to investors. Yes, you read that right. To support a stock market in free-fall (but still up 66% over the past year and a half), the government now wants to make it easier for retail investors to buy on margin. If this doesn't stop the bleeding, we wouldn't be surprised if the Chinese central bank starts to buy shares directly.

Whether by central bank or national treasury, governments around the world are eager to support world markets and economies. Historically, attempts at this sort of manipulation (we're tempted to say "central planning") have ended quite badly. Proponents of free-market capitalism believe that markets will operate soundly and efficiently if left to willing, but not obliged, buyers and sellers. Those in the appraisal business use this definition in determining market value for everything from art and jewelry to real estate. If the buyer is provided a lot of money at an artificially low interest rate, he may be willing to pay more to purchase whatever it may be. He may also be more inclined to buy if he feels his downside is limited. This is what economists call "moral hazard", and its application is rife throughout the world.

If asset prices increase because of "cheap money" and other schemes to generate artificial demand, what happens to prices when the cheap money goes away? The US Federal Reserve has been saber-rattling for months that rates will be lifted. Soon. And we mean it this time. Rates will be lifted at some point, and markets will adjust to the new reality. Our point is that with so many governments and central banks doing so much to soften and ease, it is almost impossible to tell what that reality looks like or how one goes about determining appropriate valuations. On the other hand, investors should be wary of trying to fight three Feds (European, Japanese and Chinese central banks).

In the wake of 2008 and the financial and economic destruction it wrought, governments added liquidity to address the emergent conditions. But the emergencies have largely passed, and the easy money continues. Artificial monetary conditions are unsustainable, and we fear that the attendant consequences are compounding in unforeseen ways.

So what does all this mean for investors? The best interpretation I can glean is that following several years of strong appreciation from the harvest of low-hanging fruit, asset prices are now much more vulnerable to exogenous shocks, and additional stock gains must come from an improvement in fundamentals. In other words, returns are likely to be lower than they have been in the past. We remain defensive and ever-vigilant.